Jesus left there and went to his hometown, accompanied by his disciples. When the Sabbath came, he began to teach in the synagogue, and many who heard him were amazed.

“Where did this man get these things?” they asked. “What’s this wisdom that has been given him? What are these remarkable miracles he is performing? Isn’t this the carpenter? Isn’t this Mary’s son and the brother of James, Joseph, Judas and Simon? Aren’t his sisters here with us?” And they took offense at him.

Jesus said to them, “A prophet is not without honor except in his own town, among his relatives and in his own home.” He could not do any miracles there, except lay his hands on a few sick people and heal them. He was amazed at their lack of faith.

When the prophet Samuel was looking for the right man to anoint king over Israel, God sent him to the house of Jesse. Jesse’s grandmother was the Moabitess, Ruth, and his great-grandma was the infamous woman of Jericho, Rahab. An unlikely family in which to find the most famous king of Israel. But if that were not enough, when Jesse brought out his eldest and most accomplished son to meet Samuel, God said, “No, Sam, that’s not him.”

Samuel went through seven of Jesse’s boys, and God turned thumbs down on every one. Perplexed, Samuel asked Jesse, “Are you sure that’s all your kids?”

“Yeah,” Jesse said. “That’s it. Well, except for David, of course, but there’s no way he’s the one you’re looking for. He’s nothing but a sheep kid. He’s out there with the sheep now—definitely not king material.”

All Jesse’s boys nodded and a couple snickered. “Definitely not king material.”

“Listen, Samuel,” Jesse said. “These are all fine boys here. Why don’t you ask the Lord again, because you can bet your sandals that if one of my boys is going to be king, it’ll be one of these. David’s nothing special, and frankly, things are better around here when he’s off with the sheep.”

Samuel shook his head, eyeing the imposing lineup of Jesse’s boys. Tall, good looking, and probably good warriors, he figured. Why does the Lord always have to pick the low enders? He smiled. He himself was a bit of an unlikely choice too, come to think of it. If it hadn’t been for his mom’s crazy vow, he might have been a normal kid instead of growing up in the tabernacle cleaning linen and hauling water for old Eli.

“No, the Lord says it’s none of this bunch. You’d better go fetch this David out of the pasture.” He shrugged. “With the Lord, you never know. I had to pull Saul out from behind a pile of grain sacks, you know. The kid was shaking like an olive leaf.”

With a laugh, the prophet added: “The Lord doesn’t see people the way we do. He’s not into looks and all that folderol.” 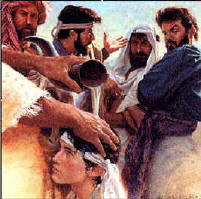 You know what happened. David’s brothers must have been a little miffed that little brother David was anointed king instead of one of them. Maybe they felt a little like the sons of Jacob, who resented the way their dad made over spoiled little Joseph as if the older kids were little more than glorified ranch hands.

It was no different with Jesus. How can somebody you grew up with, somebody you might have watched grow up, somebody whose habits and idiosyncrasies often got on your nerves, suddenly start acting as though he thought he was somebody? Just who in Galilee does this guy think he is?

Woody Allen once said, “I wouldn’t want to belong to any club that would have me as a member.” Or maybe it was Mark Twain. Or Groucho Marx. Or all of them. Anyway, the people of Nazareth must have had a similar policy: “Anybody from around here has got to be a loser; just look at us. No, we don’t care if he can do miracles, this guy has got to be a fraud.”

So Jesus said his famous line: “A prophet is not without honor except in his own town, among his relatives and in his own home” (Mark 6:4). You might not remember it quite like that, but don’t forget the King James Version is nearly twice as old as the United States; a little modern English is good for the soul. Jesus said it in Aramaic, anyway, and none of us would make that out, even if we’ve studied it, because understanding someone’s pronunciation from 2,000 years ago is different from reading it today.

But we digress. The lesson we’re drawing out of this passage is that we’re a whole lot more enamored with impressive strangers than we are with the people we already know all too well. That helps account for sexual affairs, you know. It’s all in the mystery. If you really knew the goofball you were shacking up with for the night the way his or her relatives and friends do, you’d stay a million miles away. But alas, we have more respect for people we don’t even know than for those we do.

It was in Nazareth, where Jesus grew up, that he could heal only a few people. Why? Because they didn’t believe he could possibly be a healer. They could not accept one of their own as being somehow greater than they were, even if it meant foregoing the healing he could have brought them. Faith and humility don’t travel without each other. Trusting Jesus means seeing yourself in need of him. Knowing your need for him generates trust in him. He’s in town, your town, right now. Trust him with your burdens. Let him give you rest. It’s you he’s come to see.

The first time Jesus sent out the disciples, he gave them some pretty specific instructions: Go two by two, take a staff (presumably a shepherd-style staff, not an office staff), but don’t take anything else — no food, no satchel, no money. Wear sandals, but don’t take a change of clothes. When you get to a town, stay in the first house you enter until you leave that town. And if anybody doesn’t welcome you or listen to you, shake the dust off your feet on your way out of town.

Strange stuff. Apparently they followed the instructions, and apparently they had a good trip — they drove out a lot of demons and healed a lot of sick people by anointing them with oil.

But why the unusual instructions?

Some people think those instructions should still be followed today. Not many people, thank God, but there are some who prey on unsuspecting generous people, citing this passage as their badge of authority to move in and leech off somebody by masquerading as a “servant of God.” Don’t listen to such people—they’re con artists, not evangelists or prophets or whatever else they might call themselves.

So what did Jesus have in mind with these strange rules for this first “disciplic” excursion? Mark is brief, just giving the facts, but not the background. His first readers probably knew what was behind these instructions, but a couple of thousand years down the road we have to piece it together from what we know of the religious and social customs of first century Judea.

The command to go two by two might reflect Deuteronomy 17:6 and 19:15, where Israel was taught that at least two witnesses were needed to establish the truth of a matter — in this case, the veracity of Jesus’ ministry.

They were to take no food, satchel or money. It might be that Jesus simply wanted to illustrate the fact that his followers were to trust God for their needs. Or it might be that he wanted to show that his followers were not like certain speakers of the day who traveled into towns with a collection bag to gather money. Or maybe the idea is that they were to travel light to symbolize the urgency of their mission.

Beyond that, it gets pretty murky. They were to take a staff, or walking stick. We could invent a meaning for the walking stick, but it would be our invention. For example, we could say that the disciples would be shepherds of the flock one day, and the staff symbolizes that. But we would be guessing.

Why sandals? We’re not told. The shaking of dust from the feet might be easier to understand. According to tradition, when a Jew returned to Judea from visiting a foreign country, he was to shake the dust off his feet, thereby keeping the land unpolluted from the dust of gentile lands. The disciples were to shake the dust off their feet as a witness against any Jewish towns that refused them, maybe symbolizing that such a town was cutting itself off from Israel by refusing Jesus.

Whatever the reasons behind them, these instructions were not intended to be the norm for all mission style work from then on. They were unique instructions for a unique band of men on a unique mission, unique even for them. The commands were specific to that particular mission, and they probably had something to do with presenting a symbolic testimony to Jesus as Messiah, even though we’re not directly told that.

Naaman, an Aramaic general who suffered from leprosy, was told by Elisha the prophet to dip in the Jordan River seven times to cure the disease (2 Kings 5). Should we go jump in the river to heal our skin problems? The Israelites were told to go outside the camp with a shovel to relieve themselves (Deuteronomy 23:12-13). Should we avoid toilets and drive out of town when we need to relieve ourselves?

It’s a good idea to look at the principles behind a particular instruction as a way of helping us determine whether and how to apply that instruction to ourselves in our day. Some biblical instructions might not apply to us at all. Others might need to be applied in ways that are appropriate for our day and circumstances, rather than the specific ways they were applied in biblical stories.

Jesus said that what marks us as his true disciples is that we love one another (John 13:35). Now there’s an instruction that means exactly the same thing today as it did when it was first given. Wouldn’t it be great if we gave that one the most attention?