A Bible, especially if it is an older version, can look about as inviting to read as a telephone directory. But don’t let that first impression put you off. Behind the intimidating facade is a fascinating story. 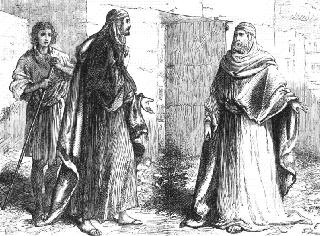 Mark’s Gospel has only 16 chapters. Taking a chapter a day, you could read the book in just over two weeks. Any Bible will do, but we suggest you use a version in modern English, such as The New International Version or The New Revised Standard Version.

This gospel is traditionally attributed to John Mark, the man who accompanied Barnabas and Paul on their first missionary journey (Acts 13). John Mark abandoned that mission early, which greatly disappointed Paul, who refused to take him on a later journey (Acts 15:36-38).

Barnabas was willing to give the young man another chance, and took him on a mission to Cyprus. Mark made good and was later reconciled with Paul, who subsequently wrote that he was a useful helper (2 Timothy 4:11).

We do not know for certain when Mark wrote, or to whom. However, there is evidence that he wrote in Rome to encourage Gentile Christians, and to prove that Jesus was the promised Messiah.

Outline of the book

Forget it! You don’t need an outline. Mark didn’t organize his Gospel neatly in topics, as Matthew did. Mark is less interested in composing literature than in telling his readers who Jesus is and what he did.

If Mark had lived today, he could have worked for CNN. He brings you the action as Jesus’ ministry unfolds. His Gospel reads like an eye-witness report of key events in Jesus’ life. You are there as he is baptized, performs miracles, chooses his disciples, heals, upsets the establishment, is arrested, tried and crucified. Verbs like “run,” “shout,” and “amaze” abound in this book. Mark’s favorite adverb is euthys, meaning “immediately” or ‘at once,’ which occurs 10 times in chapter 1 alone.

Mark “presents a rapid succession of vivid pictures of Jesus in action — his true identity revealed by what he does, not by what he says (18 miracles are described, and only four parables). It is Jesus on the move” (Life Application Bible, p. 1676). The evangelist sometimes interrupts one story to begin another, going back to the first later. Chronology is reckoned in days and, in the account of Jesus’ trial and crucifixion, hours.

Mark concentrates on miracles and the revolutionary nature of Jesus’ teaching (1:22) to emphasize his authority. Dramatic signs at crucial events also reveal Jesus to be the supreme Servant of God, performing the Father’s will with authority and power.

At Jesus’ baptism, heaven is “torn open” (1:10); at his death, the temple curtain is torn in two from top to bottom (15:38). Mark shows how, in Jesus, God has broken into human history. Jesus urgently proclaims: “The kingdom of God is near. Repent and believe the good news!” (1:15).

Mark may have been an eyewitness to some of this. It is also possible that he got many of the details from Peter, the flamboyant disciple who was one of Jesus’ intimate friends. Mark’s Gospel is therefore an excellent introduction to Jesus Christ, who he was and what he stands for.

Mark’s Gospel shows that Jesus tried to keep his identity hidden until the end of his ministry. He knew he would be misunderstood. The Jews were expecting a Messiah who would deliver them from the Romans by force of power. But Jesus had come to deliver them from sin by his atoning death.

Jesus was the Son of God

But after Jesus had accomplished his mission, there was no need for caution. Everyone needed to know the good news. So Mark wastes no time in getting down to business. He opens with “The beginning of the Gospel about Jesus Christ, the Son of God” (1:1). He tells us that when Jesus was baptized, a heavenly voice proclaimed: “You are my Son, the Beloved; with you I am well pleased” (1:11).

Mark tells us that Jesus had the authority to forgive sin, a prerogative of God (2:5-12). Evil spirits recognized Jesus as the Holy One of God (1:24), the Son of God (3:11) and Son of the Most High God (5:7-8). The supernatural world acknowledged Jesus’ true identity as the Son of God.

However, Mark also shows that no one in the human realm fully understood this. Even Peter, who professed Jesus to be the Christ, failed to realize Jesus’ purpose: to die, and after three days to rise again (8:31). In Mark’s Gospel, the first human acknowledgement that Jesus is the Son of God comes, astonishingly, from a Roman centurion who sees Jesus on the cross (15:39).

Today, enthusiastic believers still try to make Jesus a cult super-hero. Such well-meaning devotion can distort and dilute the true nature of his life and work. The Gospel of Mark warns its readers not to proclaim Jesus other than what he really is — the Son of God, who came to die on our behalf.

Mark shows us that Jesus was a servant. He helped people, and he commands us to do likewise: “Whoever wants to become great among you must be your servant, and whoever wants to be first must be slave of all. For even the Son of Man did not come to be served, but to serve, and to give his life as a ransom for many” (10:43-45).

Mark does not portray the disciples as spiritual giants. Rather, he emphasizes their lack of understanding. Even though they forsook everything to follow Jesus, they needed to be reminded about the importance of unselfish service: “If anyone wants to be first, he must be the very last, and the servant of all” (9:35).

The original disciples had serious failings. But Jesus loved them, and persisted with them. That should be encouraging to us as we struggle to follow our Lord and Savior.

Ironically, it is the “minor” characters in Mark who display the trait of unselfish service, giving us a rich legacy to learn from: “The poor widow gives out of her need, her whole living” (12:41-44). An unnamed woman uses expensive ointment to anoint Jesus ahead of time for his burial (14:3-9). Joseph of Arimathea takes courage and approaches Pilate for the right to bury Jesus (15:43). Women go to anoint Jesus’ body at the grave (16:1-3). (“Losing Life for Others in the Face of Death: Mark’s Standards of Judgment,” Interpretation, October 1993, pp. 361-362)

Jesus tells us to deny ourselves in order to serve him and to further the gospel: “Whoever loses his life for me and for the gospel will save it” (8:35). Jesus is the ultimate example of service, and he died on our behalf. This, indeed, is the great paradox of the gospel: By giving up our lives in service to our Lord and Master, we gain eternal life through him.

The Gospel of Mark is an antidote for a secular society bent on “upward mobility” – being first at all costs. On the contrary, Mark teaches us that our lives must truly reflect the “downward mobility” of the cross.

Donate
John the Baptist Prepares the...
John was preaching a baptism of repentance. And this was his message: "After me will come one more powerful than I, the thongs of...
Read More
Scroll to top