But when Herod heard this, he said, “John, whom I beheaded, has been raised from the dead!” 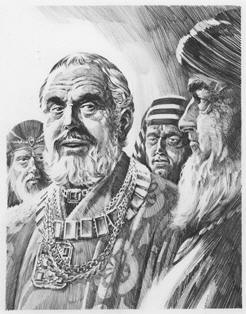 Herod Antipas was a man with blood on his hands. Of all his accomplishments, great and small, during his 33-year reign as tetrarch (he was not actually a king), he is best remembered for his murder of John the Baptist.

Maybe it’s only when past deeds come back to haunt us that our consciences truly come to life. Most people spend their lives covering up their dark side, keeping their skeletons securely locked away in hidden closets under the back stairs of their minds.

Hiding from our sins

It’s a sin management thing. Keeping the shame and horror of our sins out of sight and out of mind allows us to function in the light as normal, decent human beings.

It allows us to live with ourselves. But there’s always that nagging fear that we have to keep pushing back into the shadows—the fear that somehow, some day, one of those skeletons is going to come to life, crash its way out of the closet, walk up to us in the middle of a crowd and wag its boney finger accusingly in our face.

That’s what Herod thought had happened. He had never successfully managed to keep the memory of John’s murder chained silently beyond the boundaries of his struggling conscience. Of all the people he had executed, certainly most of them enemies and criminals, this was the one he actually regretted.

It wasn’t a political assassination or an act of revenge or even retribution. It was a simple act of cowardice, of embarrassment. He had made a boast in front of two women and was ashamed to take it back. So he murdered the one bright spot in his otherwise decadent, self-indulgent life. Why not? He had bowed to the ruthless demands of his wife, Herodias, before. It was easier that way. One more time shouldn’t matter so much. But it did.

What Herod didn’t know was that the man he feared was John the Baptist raised from the dead was actually Jesus the Messiah, the King of the Jews whom his father had tried to murder 30 years earlier in the massacre of the babies in Bethlehem.

But you and I do know. And we know that Jesus can clean out all the skeletons in all our closets — if we want him to.

When we trust our lives to Jesus, we no longer have to manage our sins by hiding from our consciences. Jesus cleans our guilty consciences (see Hebrews 10:22), and God erases our sins from his memory.

Why suffer the misery of a guilty conscience when we don’t have to? Isn’t it time to unlock the closets for our Savior?

Donate
Exploring Luke
Although the author does not name himself in this book, early church tradition is unanimous in saying that the third Gospel was...
Read More
Mark 8:27-38 – Everyone...
Jesus did most of his ministry in the Jewish areas of Galilee and Judea. But on at least one occasion, he traveled north of Galilee....
Read More
Scroll to top