Tola and Jair (Judges 10:1-5) were among the so-called “minor” judges. They performed judicial functions in Israel and were responsible for administering and maintaining the law within the society. The “major” judges, on the other hand, were predominately military leaders who delivered Israel from external enemies.

The next of these major judges was Jephthah, an unlikely prospect for a godly leader (he was the son of a prostitute). But he was a mighty warrior, and God used him to drive back the Ammonites (Judges 11:1-33).

Unfortunately, Jephthah made a rash vow to God (verses 30-31). The nature of Jephthah’s vow has been vigorously debated by scholars over the years. Opinion is still divided on this issue. Those who claim Jephthah had human sacrifice in mind when he made the vow argue that:

On the other hand, those who believe that Jephthah would never have made a vow involving human sacrifice claim that:

Whatever Jephthah had in mind when he made the vow, did he sacrifice his daughter? Some think he did, because his vow was to make a burnt offering. This view predominated among Jews and early Christians alike: “With regard to Jephthah’s vow, the view expressed so distinctly by Josephus…was the one which generally prevailed in the earlier times among both Rabbins [Rabbis] and fathers of the church, [namely] that Jephthah put his daughter to death and burned her upon the altar as a bleeding sacrifice to Jehovah” (C.F. Keil and F. Delitzsch, Commentary on the Old Testament, vol. 2, p. 388).

Other scholars conclude that Jephthah did not sacrifice his daughter. They offer three major arguments:

In any case, Jephthah’s vow brought him terrible grief. This should caution us today. It is so easy, in the heat of the moment or during an intense personal trial, to make foolish promises to God that one deeply regrets later. “Making spiritual ‘deals’ only brings disappointment. God does not want promises for the future, but obedience for today” (Life Application Bible, NIV, commentary on Judges 11:34-35).

Three judges are mentioned following Jephthah’s death: Ibzan, Elon and Abdon (Judges 12:8-15). Although we know little about any of them, it is evident that the unrest in Israel continued and that “the Israelites did evil in the eyes of the Lord” (Judges 13:1). Consequently, God delivered the Israelites into the hands of the Philistines.

The Philistines lived on the west side of Canaan, along the Mediterranean coast. From the time of Samson until David, the Philistines were the major enemy force in the region and posed a constant threat to Israel. They were fierce warriors, having the advantage over Israel in numbers, tactical expertise and technology. For example, they knew how to make weapons out of iron (1 Samuel 13:19-22).

An angel of the Lord visited the parents of Samson, informing them that they would have a son who would begin to deliver Israel from the Philistines (Judges 13:2-5). According to the angel, Samson was to be a Nazirite, a person who took a vow to be set apart for God’s service (verse 5. Although a Nazirite vow was sometimes temporary, in Samson’s case it was for life. A Nazirite was not to cut his hair, touch a dead body, eat grapes or drink anything containing alcohol (Numbers 6).

Most of the judges God used were unlikely heroes. Ehud was a Benjamite (Hebrew: ben-htayemini, which means “son of my right hand”) who was left-handed (Hebrew: ‘itter yad-yemino, which means “handicapped in his right hand”). Shamgar used not a sword or spear, but an oxgoad to deliver Israel. In a male-dominated society, it was Deborah, a woman, who inspired Israel’s victory over Sisera’s army, and Jael, a gentile woman, who slew Sisera — with a tent peg. Gideon came from the weakest clan in Manasseh, and Jephthah was an outcast son of a prostitute.

As a man dedicated to God from before birth, and one whom God’s Spirit imbued with superhuman strength, Samson seems to be an ideal hero. Yet, even here, it was Samson’s weakness — his attraction to Philistine women — that God used to deliver Israel.

Samson wanted to marry a Philistine woman from Timnah, against his parents’ wishes. However, “his parents did not know that this was from the Lord, who was seeking an occasion to confront the Philistines” (Judges 14:4). One day, on his way to Timnah, Samson was attacked by a lion. Samson, empowered by the Spirit of God, simply tore the lion apart with his bare hands (verse 6). Sometime later, Samson was surprised to see a swarm of bees and some honey in the lion’s carcass.

At the beginning of the seven-day wedding feast, Samson posed a riddle concerning this unusual sight to his 30 companions: “Out of the eater, something to eat; out of the strong, something sweet” (verse 14). The stakes were high — if the companions solved the riddle, Samson would owe each of them a set of clothing, which was expensive in those days.

The companions were unable to solve the riddle, so they threatened Samson’s wife: “Coax your husband into explaining the riddle for us, or we will burn you and your father’s household to death” (verse 15). Samson’s frightened wife finally cajoled the answer from him and promptly told his companions.

When the companions gave Samson the right answer, he immediately realized his wife had betrayed his secret. In his fury, he stormed up to the Philistine city of Ashkelon, killed 30 men, stripped them and gave their clothes to the 30 companions. Still burning with anger, Samson left his wife in Timnah and returned to his father’s house. In the meantime, Samson’s wife was given to his chief companion.

When Samson found this out, he determined to wreak full vengeance upon the Philistines. Samson was ruthless, using any available means to achieve his ends. Note the cruel way he used foxes to destroy the Philistine agriculture (Judges 15:4-5). The Philistines retaliated by burning Samson’s wife and her family — ironically, the fate she had hoped to avoid by seducing Samson’s secret riddle from him. This action only served to anger Samson further. He slaughtered many Philistines in a series of direct, one-man attacks.

Eventually, the Philistines marched in force into Judah, demanding that Samson be handed over to them. Samson allowed the men of Judah to bind him and give him to the Philistines.

Once in the Philistine camp, however, Samson was again empowered by the Spirit of God. He flexed his muscles and the ropes snapped. Then he seized the most unlikely weapon of all — the jawbone of a donkey — and slew 1,000 men. This herculean effort left Samson extremely thirsty. He prayed to God: “You have given your servant this great victory. Must I now die of thirst and fall into the hands of the uncircumcised?” (verse 18). God responded to Samson’s prayer by opening up a spring. “When Samson drank, his strength returned” (verse 19). 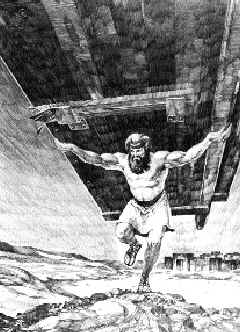 On a later occasion, Samson decided to spend the night with a prostitute in the Philistine stronghold of Gaza. The Philistine military made sure that Samson could not escape from the city and waited until dawn for a chance to kill him.

Unlike Ehud and Jael, Samson could not be accused of subtlety in dealing with his enemies. But what he lacked in subtlety, he made up for in strength. In the middle of the night, Samson “got up and took hold of the doors of the city gate, together with the two posts, and tore them loose, bar and all. He lifted them to his shoulders and carried them to the top of the hill that faces Hebron” (Judges 16:3). An unusual method of escape, no doubt, but one that highly embarrassed the Philistines.

Unfortunately, Samson was still obsessed by Philistine women. A woman named Delilah had Samson’s eye at this time. Unknown to Samson, each of the Philistine rulers had promised to give Delilah the vast sum of 1,100 shekels of silver apiece, if she could find out the secret of Samson’s strength.

Like water eroding stone, Delilah slowly wore down Samson’s resistance. Eventually, he told her the secret: “‘No razor has ever been used on my head,’ he said, ‘because I have been a Nazirite set apart to God since birth. If my head were shaved, my strength would leave me, and I would become as weak as any other man’” (verse 17).

So one fateful day, Delilah soothed Samson to sleep on her lap and got a man to shave Samson’s head. When Samson awoke, his strength had departed, and the Philistines overpowered and blinded him (verses 19-21).

The Philistines threw Samson into prison and put him to work, grinding at a mill. As Samson worked long, arduous hours at the mill, he undoubtedly reflected on his life, on how he had allowed his weaknesses to come between him and God. Yet Samson also knew that God was merciful and forgiving.

The Philistine rulers decided to organize a great celebration in honor of Dagon, their god of grain and chief deity. “How vividly the Philistines remembered Samson’s ‘reign of terror’! It had been a time of devastation and death, and even Dagon’s grain was put to the torch (15:5). But this was replaced by laughter and feasting as the drunken Philistines called for the once invincible Samson to appear before them (v. 25). The word translated ‘entertain’ (sa-haq) is literally ‘play with,’ ‘amuse.’… Clearly the Philistines intended to mock Samson as he performed for their amusement (cf. Gen 21:9)” (The Expositor’s Bible Commentary, vol. 3, p. 479). 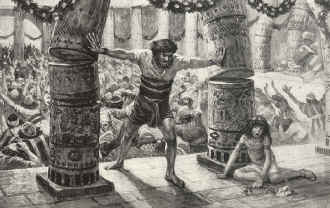 But God, the only God, had delivered Samson into the hands of the Philistines in order to fulfill his purpose — as they were about to find out! With the help of a servant, Samson located the two central pillars of the temple. In one last fervent prayer, he asked God, “Please strengthen me just once more, and let me with one blow get revenge on the Philistines” (Judges 16:28). Then, with a mighty push, Samson dislodged the supporting pillars, causing them to slide off their stone bases. “And down came the temple on the rulers and all the people in it” (verse 30).

In spite of Samson’s past, God still answered his prayer and destroyed the pagan temple and worshipers. God still loved him. He was willing to hear Samson’s prayer of confession and repentance and use him this final time. One of the effects of sin in our lives is to keep us from feeling like praying. But perfect moral behavior is not a condition for prayer. Don’t let guilt feelings over sin keep you from your only means of restoration. No matter how long you have been away from God, he is ready to hear from you and restore you to a right relationship. Every situation can be salvaged if you are willing to turn again to him. If God could still work in Samson’s situation, he can certainly make something worthwhile out of yours. (Life Application Bible, NIV, commentary on Judges 16:28-30)