Israel’s history can be summarized by the word failure. In the books of Moses, God’s relationship with the Israelites is described as a covenant, a relationship in which promises of loyalty are given. However, the Bible describes numerous failures on the part of the people. They did not trust God, and they grumbled about what he was doing. Their pattern of distrust and disobedience is found throughout Israel’s history.

The bright spot in Israel’s history is the faithfulness of God. This gives us great confidence today. Since God did not reject his people back then, he will not reject us either, even when we have times of failure. We may experience pain and sorrow as the result of bad choices, but we don’t ever need to be afraid that God will stop loving us. He is always faithful.

During the period of the judges, Israel saw the cycle of disobedience—oppression—repentance—deliverance. After each leader died, a new cycle would begin. After several of these cycles, the people asked the prophet Samuel to give them a king, a royal family, so one of his descendants would always be available to lead the next generation. God told Samuel: “They have rejected me as their king. As they have done from the day I brought them up out of Egypt until this day, forsaking me and serving other gods, so they are doing to you” (1 Samuel 8:7-8). God had been their unseen leader, but the people did not trust him. God therefore provided a person to be a mediator, a representative, who could rule the people on God’s behalf. 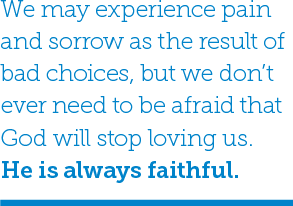 Saul, the first king, was a failure, because he did not trust God. Samuel then anointed David as king. Although he had significant failures in his life, David’s overall desire was to worship God. After he had achieved some peace and prosperity, he offered to build a great temple for God in Jerusalem. It would be a symbol of permanence not only for the nation, but also for their worship of the true God.

In a Hebrew play on words, God said, “David, you will not build me a house. It will be the other way around: I will build you a house, the house of David. It will be a royal dynasty that will last forever, and one of your descendants will build the temple for me” (2 Samuel 7:11-16, my paraphrase). God used the covenant formula: “I will be his father, and he will be my son” (verse 14). He promised that David’s dynasty and kingdom would last forever (verse 16).

But not even the temple lasted forever. The dynasty of David fell—religiously and militarily. What had happened to God’s promise? The promises given to Israel find their fulfillment in Jesus. He is the focal point of God’s relationship with his people. The security the people wanted is found only in a person who is permanent, and permanently faithful. The history of Israel points us to something greater than Israel, yet is also part of Israel’s history. 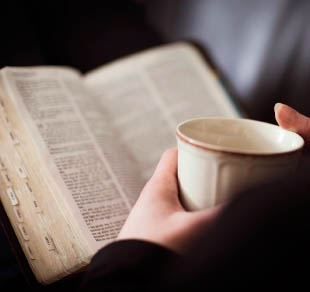 While Israel traveled through the wilderness, God had lived in the tabernacle: “I have been moving from place to place with a tent as my dwelling” (2 Samuel 7:6). Solomon’s temple was built as a new dwelling place for God, and “the glory of the Lord filled the temple of God” (2 Chronicles 5:14; 6:2). This was symbolism, because the people knew that even the heavens were not large enough to contain God (2 Chronicles 6:18).

God promised to live among the Israelites forever, if they obeyed him (1 Kings 6:12-13). But since they did not obey, he decided “to remove them from his presence” (2 Kings 24:3)—that is, to send them into captivity in another land.

But again God was faithful and had not abandoned his people. He promised he would not let their name disappear (2 Kings 14:27). They were able to repent and draw near to him even in a foreign land. God had given them the promise that if they returned to him, he would return them to their land, symbolizing a restoration of the relationship (Deuteronomy 30:1-5; Nehemiah 1:8-9).

God promised to David, “I will provide a place for my people Israel and will plant them so that they can have a home of their own and no longer be disturbed. Wicked people will not oppress them anymore, as they did at the beginning” (1 Chronicles 17:9).

The promise is surprising, because it comes in a book that was written after Israel had been taken into exile. The history of Israel points beyond itself—it is a promise awaiting fulfillment. The nation needed a leader who was descended from David, and yet greater than David. They needed the presence of God not just symbolized in a temple, but made real to each person. They needed a land not just with temporary peace and prosperity, but a transformation of the entire world, so there would be no oppression at all.

Israel’s history points to a future reality. But there was a reality in ancient Israel, too. God had a covenant with Israel, and he was faithful to it. They were his people, even when they were disobedient. Although many of the people went astray, many others did not. Although they died without seeing the promises fulfilled, they will live again to see the leader, the land, and best of all, eternal life in the presence of their Savior.

This article is part of a series. The other articles in this series are:

Dr. Michael Morrison teaches classes in the New Testament at Grace Communion Seminary. More information about the seminary can be found at: www.gcs.edu