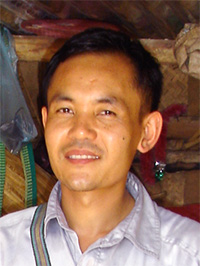 Meet Deben Sam. Deben is a young man—quiet, resolute, and unobtrusive, but with a heart that agonises for those who are poor and suffering. He was born in the shadows of Mt. Everest among a people who are for the most part uneducated people living in harsh conditions. Many idealistically think of Nepal as the land of yaks and yetis and majestic mountains. It is spectacularly beautiful, but it is also grindingly poor.

Deben and his wife, Manju, are from Limbu province in eastern Nepal. He moves easily in this environment, and he has been instrumental as a tool of God in introducing many village people to their Savior.

One of his newer groups is on the far eastern border of Nepal, where roads don’t exist and electronics are useless. Once or twice a year, Deben makes one of his extended visiting trips to the village of Chyanthapu in the mountains along the eastern border with India, where there are few believers.

It’s a 4:30 a.m. start from his Kathmandu home in a three-wheeler motor taxi (called a tuk-tuk in some parts of the world) heading for the bus station. The “day bus” leaves for Birtamod at 5 a.m. It has no air conditioning. In winter it is mild, but in summer the weather is sweltering. Thirteen hours and 400 miles later, it arrives in Birtamod, a small city in the southeastern corner of Nepal. But he’s not there yet. It’s just time to change buses. Now he will travel north to Phidim, another 7-8 hours on a rough, deeply rutted road. The distance travelled is close to 75 miles, but the speed is slow and the road tortuous.

Phidim is a small town—the nearest bus stop to the village Deben needs to reach. But “near” is a relative term. Ahead of him lies two days of walking to Chyanthapu. The local people can do it in one day, but for a 30-year-old, healthy young man from the city, it takes twice as long. Surely, you say, he could use a motorcycle. But no, the narrow track clings to the side of steep hills. In fact, the local people joke that it is so steep and narrow that even the monkeys slip off. Deben said that, at times, he has to walk on all fours like a monkey to retain his footing up the hills. And I haven’t mentioned yet that he is carrying a backpack containing weighty Bibles, supplies and equipment.

After two days of walking and a night on the way, he arrives in Chyanthapu to be welcomed into the Christian home where he is staying. It’s small, one room downstairs and one upstairs, of stone and mud walls with a roof of thatch. The family cooks in the downstairs room over an open fire. They are thrilled to see him. He is tired but relieved to have arrived, four days of arduous travelling behind him at last, and at least two long days of service ahead.

This is a new fellowship group of eight people from three families, eager to hear the word of God, so there’s no time to waste. It’s into a morning Bible study for the believers, or an evening one under the flickering light of a kerosene lantern. In the afternoon, Deben’s presence generates curiosity amongst the villagers, and some will want to talk to him. There aren’t many visitors in such a remote village. It’s an opportunity for explanations of why he is here, why he cares, and what he brings with him. For them it is good news.

Most want to hear more, so the evening meeting could become an extended assembly. Did I mention that in his backpack, in addition to Bibles to distribute, Deben has brought into the hills a megaphone so he can speak more easily to larger groups? The days are long. No part of the day is wasted. It’s a special event for such a remote village—although not every local resident appreciates the truth that counters their Hindu traditions passed down through the generations.

The meals are times of discussion and fellowship. Simple rice dishes with vegetables are served, tastier than in the city, Deben says. On special festival occasions, buffalo meat will be added, but only rarely. It’s a real luxury.

When it comes time to leave, the fellowship group gathers for worship with singing and prayer. The rhythm comes from a chyabrung, a two-sided drum common in the Limbu province. The little group is so new that they don’t yet have an established leader. Deben is farewelled with sadness and the big question, “When will you be back?” Then he moves on to another village, or the four-day return trip to Kathmandu. The entire expedition usually takes 10-14 days.

Limbu is the home province of Deben and his wife, Manju. The Limbu dialect is one of three languages Deben speaks. He was the first Christian converted in his village, and in spite of his parent’s efforts to protect him, he was driven out of the village by the persecution of the Hindu villagers towards his family. He fled to Kathmandu and for a while lived with a Christian uncle who was involved in ministry there. Eventually he branched out into his own ministry because of his heart for the poor and the neglected people who populate the villages and towns of Nepal.

In Kathmandu, Deben’s brother-in-law, Raju, and his wife, Sarika, assist full time in his ministry. Raju supervises the day-to-day operations of the medical clinic serving the disadvantaged brickyard workers on the outskirts of Kathmandu. It’s a joint venture between Gospel for Himalayas Ministry and GCI, and one we support financially. Deben’s younger sister has taken responsibility for six little orphan girls whom they love, support and educate in a rented facility in Kathmandu used by the local congregation for worship services.

Far to the west of the capital, there is also a growing network of new groups—the farthest being in a small village of Kunjagali, about 20 hours by bus from Kathmandu, serving the Kamaiya people. To the north in the last village before the great mountain of Ganesh Himal, there is another new group of Tamang people.

On a trip with Deben to a village west of Kathmandu where a new group was being established, I asked him, “Why here?” I meant to ask how this village had been chosen, but he interpreted my question more broadly. He looked slightly puzzled, and told me it was because he had a heart for the poor and they were the poor! Deben’s love and compassion and sacrificial commitment to his people is reflected in his work, his family and the local congregation. I am so grateful that God has brought us together in shared ministry.