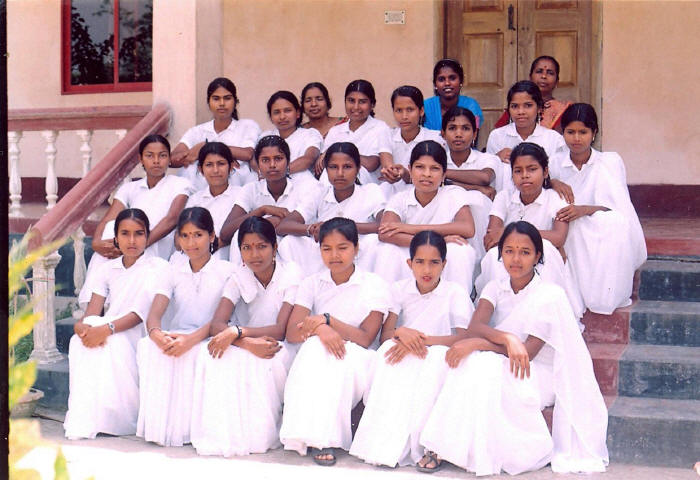 Dr. John Biswas, founder of Bengali Evangelical Association (BEA), has worked for more than 20 years to bring the gospel message to the very poorest of the poor in remote villages of Bangladesh. John is an elder of Grace Communion International and coordinates his ministry with senior church officials. I recently
accompanied him as he visited the BEA mission in one of those villages.

The dirt roads from Barisal, a bustling city of markets and rickshaws, to the BEA mission often run along the edge of steep riverbanks and are wide enough for only one vehicle. It was most harrowing when we met the occasional badly dented bus packed with passengers whose driver had little intention of giving way to anything smaller.

My arrival at the mission was scheduled to coincide with the graduation ceremony of the BEA nursing school. The names of 20 young Bengali women in their new white uniforms were read out and as they passed before me, I had the great privilege of presenting them with their graduation certificates.

This nurse’s aide training program accepts young village women of all faiths and makes them into what some have called nursing nightingales. This is not only because of Florence Nightingale’s pioneer work in nursing, but also because the nightingale bird shares its beautiful song unconditionally, wanting nothing in return except that you enjoy its music. Nightingales are common in Bangladesh. Some say the bird was brought from England and released into the gardens of homesick expatriates when Bangladesh was part of India and under British rule. To the dreamer, the bird’s haunting song foretells a paradise yet to come, a place where love and joy abound.

Let me introduce you to 18-year-old Nitka, one of the nursing graduates. We meet her in a small hut on the hot and steamy flatlands of Bangladesh. Here she, a Muslim, is comforting a dying farm laborer, a Hindu, whose hard life is coming to an early end because of malnutrition and disease. She is a nightingale of Bangladesh, providing care and kindness as she can to anyone who needs it, in spite of cultural and religious barriers.

Nitka was happy to be selected for the training program because prospects for the future are grim for women in her culture. Females typically are forced into arranged marriages to men who treat them as their property. The training that Nitka received enabled her to hold her head high when she returned to her village. Her family and the local young men now treat her with respect, as she is the only person for miles who has any medical knowledge. She came from a poor Muslim family and has now become a woman of substance, as one nursing graduate phrased it. She is able to serve the villagers and has also secured a nursing job with a rich family, which enables her to support herself and her aging father and mother.

Like the many other young women who have graduated from the nursing program, Nitka has become like a nightingale that sings its sweet song for all who can hear. Of even deeper significance, Nitka’s service and care foreshadow better things to come as she shares with the sick and dying the gospel hope that she learned while at the nursing school.

As far as we know, the training program is the only free one of its kind in all of Bangladesh. The students live in the school dormitory during the three-month full-time course in
practical basic nursing, which is designed for service in the village situation. The course also exposes them to the gospel and to Christian values, which they in turn share with those they serve.

Although the course is free to them, it costs BEA $200 per student to feed, train and supply them a nurse’s uniform, first-aid kit, stethoscope, and other equipment and supplies.

When the final certificate is presented, the newly graduated nurses aides walk tall, because they have been given new reasons to hope, new reasons to live. The success of the BEA training program establishes goodwill with the village elders and speaks volumes about God’s love for all of his children. BEA shows them by its action and impact that Jesus Christ did not come just for white Westerners, but for all the people of the world, including them. For many, this is a radical concept and they want to know more.

Back in Barisal the night before I was due to leave, I walked out onto the flat roof of the house where I was staying. A breeze came up, gliding freely across the rooftops into the homes
of Muslims, Hindus and Christians, reminding me that God’s Spirit moves wherever it wants, and that he loves all his children everywhere.

A nightingale warbled in the distance.