Jesus praised Peter for accurately identifying him as the Messiah, and he promised him great authority. But in almost the next breath, Jesus gave Peter one of the strongest rebukes in all of Scripture. The incident, and the teaching of Jesus that surrounds it, tells us much about the purpose of the Messiah. 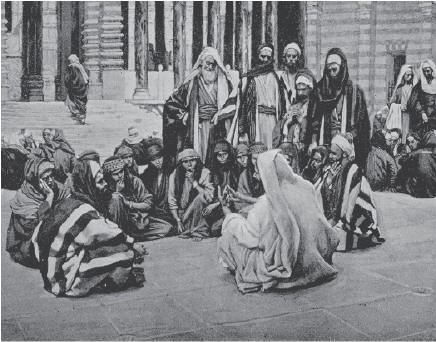 First, some “Pharisees and Sadducees came to Jesus and tested him by asking him to show them a sign from heaven” (Matt. 16:1). Jesus had already done many miracles, but the Jewish leaders wanted special proof. Jesus refused to take their test, because they were asking the wrong questions.

Matthew changes the scene, but still has the same subject in mind. “When they went across the lake, the disciples forgot to take bread. ‘Be careful,’ Jesus said to them. ‘Be on your guard against the yeast of the Pharisees and Sadducees’” (vv. 5-6). Jesus meant this as a metaphor, but the disciples thought he was warning them about real yeast. Instead of asking Jesus what he meant, “they discussed this among themselves and said, ‘It is because we didn’t bring any bread’” (v. 7).

But Jesus knew what they were discussing, and asked them: “You of little faith, why are you talking among yourselves about having no bread? Do you still not understand? Don’t you remember the five loaves for the five thousand, and how many basketfuls you gathered?… How is it you don’t understand that I was not talking to you about bread? But be on your guard against the yeast of the Pharisees and Sadducees” (vv. 8-11).

I am not worried about bread, he seemed to say. If we need to, we can make some more. The disciples then understood that Jesus was using a figure of speech: “He was not telling them to guard against the yeast used in bread, but against the teaching of the Pharisees and Sadducees” (v. 12).

Although Jesus could have had various teachings in mind, Matthew puts it in the context of ideas about a Messiah. The Jewish leaders had just asked for proof that Jesus was the Messiah. They had ideas about what a Messiah would do, but they were wrong, so Jesus tells his disciples not to listen to them.

‘You are the Messiah’

The next scene that Matthew describes occurs north of Galilee, in a gentile area ruled by Herod’s son Philip. It was a safe place to discuss the word Messiah without any bystanders getting the wrong idea. “When Jesus came to the region of Caesarea Philippi, he asked his disciples, ‘Who do people say the Son of Man is?’ (v. 13).

“They replied, ‘Some say John the Baptist; others say Elijah; and still others, Jeremiah or one of the prophets’” (v. 14). It is doubtful that they thought Jesus was really John or Jeremiah come back from the dead. Rather, they were guessing what sort of prophet he was: a miracle-worker like Elijah, or doomsayer like Jeremiah, or some other messenger from God.

“‘But what about you?’ he asked. ‘Who do you say I am?’ Simon Peter answered, ‘You are the Messiah, the Son of the living God.’ Jesus replied, ‘Blessed are you, Simon son of Jonah, for this was not revealed to you by flesh and blood, but by my Father in heaven’” (v. 15-17). Peter probably thought the idea was his own, but Jesus tells him that the thought actually came from God. Jesus accepts the titles that Peter has given him, and reinforces them by revealing a special role for Peter:

“And I tell you that you are Peter [Greek Petros], and on this rock [petra] I will build my church, and the gates of Hades will not overcome it” (v. 18). Some interpreters conclude that the “rock” on which Jesus built his church is Peter; others say it is his confession. Even if Jesus means Peter, however, he is not predicting apostolic succession or hierarchy. Jesus used Peter to build the church, but he also used the other apostles (Eph. 2:20).

Jesus promised Peter authority: “I will give you the keys of the kingdom of heaven; whatever you bind on earth will be bound in heaven, and whatever you loose on earth will be loosed in heaven” (v. 19). The meaning of this verse is widely debated, but the safest interpretation seems to be that Peter would open the gates of heaven to more people by preaching the gospel. When rabbis spoke of “binding” and “loosing,” they were talking about which commandments were required for the kingdom. Jesus apparently meant that through the gospel, Peter would tell people that by God’s grace, Jesus was the Way into the kingdom of God. In Matthew 18:18, Jesus expanded this role to all the apostles. Their teachings are authoritative guides for us.

Then Jesus “warned his disciples not to tell anyone that he was the Messiah” (v. 20). Since people had the wrong concept of the Messiah, they would only misunderstand if the disciples used that word for Jesus.

A Messiah who dies

Jesus then taught his disciples what his role as Messiah really was. It was not to raise an army or bring prosperity. “Jesus began to explain to his disciples that he must go to Jerusalem and suffer many things at the hands of the elders, the chief priests and the teachers of the law, and that he must be killed and on the third day be raised to life” (v. 21). The Son of God had to die and be raised.

This was so far out of Peter’s concept that “Peter took him aside and began to rebuke him.” Just a few minutes before, Peter had proclaimed Jesus to be a representative of God; now he tries to correct him. “‘Never, Lord!’ he said. ‘This shall never happen to you!’” (v. 22). We can prevent that, he seemed to say.

But Jesus told him that he was completely wrong: “Get behind me, Satan! You are a stumbling block to me; you do not have in mind the concerns of God, but merely human concerns” (v. 23). Through his ignorance and preconceptions, Peter was tempting Jesus to use power for his own benefit, just as Satan had tempted Jesus earlier. But the Son of God did not come to serve himself—he came to give himself.

Jesus had a different approach: “Those who want to be my disciples must deny themselves and take up their cross and follow me. For those who want to save their life will lose it, but those who lose their life for me will find it” (vv. 24-25). Jesus is not talking just about martyrs—he is also talking about people who lose their lives metaphorically, giving up self-centeredness, egoism and self-seeking. The selfish life will fail, but if we give our lives to the service of Jesus, we enter new life, eternal life.

“What good will it be for someone to gain the whole world, yet forfeit their soul? Or what can anyone give in exchange for their soul?” (v. 26). Even if you conquer the entire Roman Empire, what good would it do you, if you use military methods to do it? You would then be no better than the Romans. The bigger battle, and the real reason that we need a Messiah, is spiritual transformation, transformation from the stress, fear and anxious care of selfish living to the inner rest and peace of life in Jesus Christ.