Some believers struggle to belong to the church

It’s hard to let down your defenses and, more or less, give up some sovereignty, and give a minister, or a group, a certain measure of power over your life.—Letter from a friend

My friend has a problem. He would like to attend a church, but is hesitant about formally associating with one. His struggle is not unique.

Here is a dilemma that confronts a growing number of people: to cocoon—to be your own church and spiritual authority— or to join a congregation and surrender some of that independence to a religious community.

“People who consider becoming involved in a congregation,” writes Wade Clark Roof, “often experience a fundamental clash of two conflicting yearnings: on the one hand to hold on to one’s own individuality, and on the other, to be a part of a larger faith community.” Dr. Roof, a professor of religion and society at the University of California, Santa Barbara, is the author of A Generation of Seekers: The Spiritual Journeys of the Baby Boom Generation. Dr. Roof and his associates interviewed 2,620 people in California, Massachusetts, North Carolina, and Ohio. Gradually, they narrowed the scope of their interviews to 64 people, all born between 1946 and 1962.

The study verified what many people, not only those in the generation under study, already knew about themselves: They would like to commit to a church, but not at the price of their independence and autonomy. According to Dr. Roof, the 1960s and 1970s deeply affected people’s religious convictions. After the 14-year-long Vietnam War, cinched by the long, hot summer of the Watergate hearings, people’s perceptions and respect for government and authority had eroded.

Institutions of any kind—banks, public schools, the military and organized religion—all became suspect. In addition, if people already had a bad experience with a church, or even knew a friend or relative who had a bad experience, they often cut all ties with formal religion. Yet, as Dr. Roof’s studies show, even as people left the churches, spiritual yearning and hunger remained. These conflicting interests gave rise to the tension between wanting to belong to a church and fearing commitment to it.

Ironically, despite distrusting organized religion, 71 percent of Americans born after the mid-1960s either “agree strongly” or “agree somewhat” that the Bible is the inspired Word of God. (The number is slightly higher for those people born between 1946 and 1964.)

George Barna, a leading pollster and president of Barna Research Group, Ltd., extensively surveys and researches the American religious schene. His research group asked 1,005 people to respond to the statement, “The Bible is the written word of God and is totally accurate in all it teaches.” The respondents could have replied in one of five ways: strongly agree, somewhat agree, somewhat disagree, strongly disagree or don’t know. Of those interviewed, 47 percent strongly agreed and 24 percent somewhat agreed. Surprisingly, more than half of nonchurchgoers agreed, even though people who seldom, if ever, attend church read the Bible for moral guidance and inspiration.

Jesus Christ inspired the apostles and evangelists to address the needs of that community through their written words. Jesus also inspired the church to preserve those words for the community’s use through the ages. To deny the importance of community is to ignore the original purpose of the Scriptures—to teach the community as a whole. 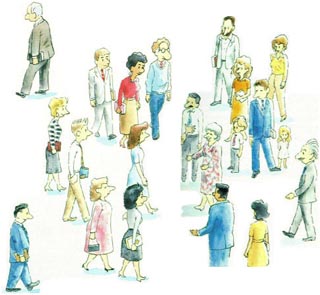 Yet, in addition to the conflicting desires of cocoon and community, something else often holds back believers who are not belongers. Ironically, it is their own expectations of the church.

The English author W. Somerset Maugham wrote a short story titled “Mirage.” It’s about an Englishman who, during his career in the Far East, dreamed of retiring to his native London. After 25 years, the man finally returned, only to be sorely disappointed. The city had changed, and his friends had moved on. After a frustrating year and a half, he resolved to return to Shanghai, a city he now remembered with fondness. He never made it back. Instead, on his return, he stopped short in a wretched town, squandering his last years dreaming of returning to Shanghai. He didn’t finish his journey because he couldn’t bear to see his expectations disappointed again.

Leith Anderson, a pastor in Minnesota, says in his book Dying for Changethat the consumer-driven economy has raised people’s expectations of churches, perhaps to unrealistic levels. These high expectations can cause people to bounce between different congregations, looking for their dream church.

They are like the man in the Somerset Maugham story. Their expectations are so high they can never be met, only disappointed. In their struggle not to settle for anything less than their ideal, some are paralyzed by their expectations and never go anywhere.

A bumper sticker back in the 1970s encouraging people to become politically involved read, “If you didn’t vote, don’t yell.” As Christians, our expectations of a church should go hand in hand with our willingness to commit and participate in the congregation. If we want to be part of something bigger than ourselves, then we must be willing to help create it. We have to participate, in spite of disappointments and annoyances.

With this approach, committing to a church is not a surrender to a community, but a joining in partnership with it. With this approach comes the healthy understanding that a church cannot fill your every spiritual need. Christian spiritual growth comes from personally accepting Jesus Christ as Lord and Savior, of committing to and experiencing the community of faith, taking time for individual Bible study, prayer and reflection. These elements together, both the personal and the communal, lead to lasting spiritual growth and maturity.

From the beginning of the New Testament church, Christians understood the importance of worshiping as a community. In the book of Acts, when Christians worshiped together, they called it fellowship. “They devoted themselves to the apostles’ teaching and to the fellowship, to the breaking of bread and to prayer” (Acts 2:42).

In those first euphoric days of the church, the members continuously celebrated the grace and salvation they received through Jesus Christ. “All the believers were together and had everything in common. Selling their possessions and goods, they gave to anyone as he had need” (verses 44-45).

Gradually, however, everyone had to return to the routine of normal life. People had to get back to making their livings. Though the euphoria subsided, their fellowship did not. They continued meeting together for worship and for sharing their Christian experiences. Fellowship was an essential part of their faith. The benefits of this fellowship were perhaps most clearly seen during times of distress.

The book of Hebrews was written to a congregation that had experienced persecution, including imprisonment and confiscation of its property (Hebrews 10:33-34). Understandably, the congregation was experiencing a spiritual low. Some members stopped attending services.

The author of Hebrews, wanting to encourage and strengthen the members of the congregation, reminded them of Jesus’ atoning work on the cross and of his continuing intercession for them as High Priest in heaven. The author then wrote: “Let us consider how we may spur one another on toward love and good deeds. Let us not give up meeting together, as some are in the habit of doing, but let us encourage one another—and all the more as you see the Day approaching” (verses 24-25).

Without worshiping together, these Christians would have continued their spiritual depression. Only by meeting together were they able to encourage each other to follow the Christian walk. Their individual relationships to the church—to each other—were mutually beneficial and even essential.

Thus, Christians not only receive the benefits of the church, but they also are responsible for helping, improving and building their congregation. Perhaps one week you do not need a kind word or a sympathetic ear, but somebody else does. With the grace of salvation comes the responsibility to help our fellow Christians.

To fulfill our responsibilities to the community of faith, God gives us the gifts of the Holy Spirit. These gifts vary according to a person’s talents and personality and according to the needs of a specific congregation. God distributes these gifts throughout the church. The question is not if you have any of the gifts of the Spirit, the question is, Which gifts do you have? “We have different gifts, according to the grace given us,” wrote Paul (Romans 12:6).

Some people have the gift to teach adults, others to teach children. Some people know how to say just the right word to those who are discouraged, or even better yet, how to listen to them. Other people know how to show hospitality, still others how to serve the needy. (You may want to study the gifts of the Holy Spirit in Romans 12:6-8 and 1 Corinthians 12:7-11 to learn which ones God has given you. Through attending church and getting involved in its work, you can learn how to apply them.)

God’s distribution of the gifts of the Holy Spirit enables us to help each other and learn from each other. God shows us, no matter what our personal strength or desire for independence, that we need one another. The British author C.S. Lewis wrote. “Christianity thinks of human individuals not as mere members of a group or items in a list, but as organs in a body—different from one another, and each contributing what no other could” (Mere Christianity, page 159).

Church just isn’t the same without you there.