While visiting California recently I decided to stop off at a private parochial high school where I used to teach a Bible class.

It’s gone! The place where I spent so many hundreds of hours teaching, where lessons were learned, careers planned, friendships made and games played — it’s vanished.

It is now just a deep hole scooped out of the ground, awaiting redevelopment. Soon, apartments and condominiums will begin to go up, and the people who live in them will have no idea that they inhabit a space where I once labored to teach ninth graders the Bible. 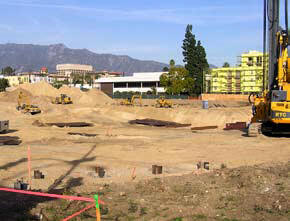 Well, as Ecclesiastes 3:3 reminds us, “There is a time to tear down and a time to build.” But it is still unsettling to see — or rather not see — a place that was once so important to you so completely changed.

I’m sure you know what I mean. Haven’t you felt that way when you revisit a house where you once lived, and see other people living in your space, with their pictures on the walls? It’s their place now, and you are a visitor, or even a trespasser. But you still feel a sense of ownership. You feel there should be at least a sign saying, “I lived here. This used to be my space.”

It gets even more complicated when people believe a piece of ground is God’s space. There are many such “sacred” places in the world — places of worship, old battlefields, grottos and caves. Even whole mountains and rivers have been designated “holy.” Certainly some places do have a traditional and a nostalgic significance, and as such should be treated with respect. We can dedicate a building to God, and ask him to use it for holy purposes. But that is not the same as making it holy. Only God can do that.

“And in him you too are being built together to become a dwelling in which God lives by his Spirit.”

What is his sign that a place is “holy”? Well, for example, in the Old Testament, God consecrated (or made holy) the Tabernacle in the wilderness and later the Temple in Jerusalem. In both cases, when they were dedicated, God sent fire from heaven. It was a sign that God was “moving in” (Exodus 40:34-35; 1 Kings 8:10-11).

After Jesus’ death and resurrection, everything changed. It was time for a new Holy Place. So on the day of Pentecost, God’s fire bypassed the temple and landed instead in the upper room of an ordinary house. But it did not stop there. The house was not to be the new Holy Place. The fire divided, and individual tongues of flame rested on the heads of the first Christians who were gathered there.

No longer was a building to be the Holy Place — people were. “Don’t you know that you yourselves are God’s temple and that God’s Spirit lives in you?” Paul wrote to the church in Corinth (1 Corinthians 3:16).
Buildings come and go. Some are demolished, and all eventually crumble. But God now dwells in and with the people who trust in him. “And in him you too are being built together to become a dwelling in which God lives by his Spirit” (Ephesians 2:22).

So the old school is gone, and the students have moved on. What is still intact are the relationships I have with so many of them. I meet them sometimes, and they introduce me to their children — little images of their earlier selves who for a moment take me back to the old classrooms.

But those classrooms are now part of a landfill somewhere. They have gone forever, but the relationships that were forged in them don’t have to. In fact, the only things that we can carry over from this world to the next are the relationships we build.

Relationships, unlike buildings, don’t have to go in order to make room for more. That is why Jesus put such great emphasis on his people maintaining their relationships in a permanent bond of love. That kind of love, wrote Paul, “never fails” (1 Corinthians 13:8).