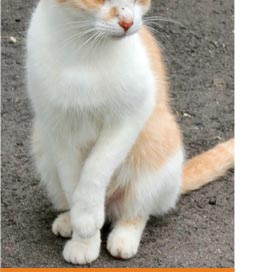 Jesus drew lessons from lilies, trees, sparrows and fish and even has some complimentary things to say about dogs. I can see that about dogs. They are loyal, unselfish and seem to be able to show unconditional love. However, he did not say anything about cats. In fact, cats are the only domestic animals that are not mentioned in the Bible. Maybe it’s because the ancient Egyptians worshipped them.

Unlike the ancient Egyptians, I am not particularly fond of cats. For one thing, I am allergic to them. I also find them greedy and self-centered compared to the unquestioning devotion of dogs. I am quite willing to share the planet with them, providing it is not the same part of the planet. I certainly don’t want one as a pet. So I was not particularly happy when Ugly Cat limped into my life.

I first saw her on a dark, cold evening just after Christmas last year. It might even have been the Feast of Stephen, although the moon wasn’t shining brightly and the snow didn’t lie round about deep and crisp and even. But there was enough snow for me to clear it from the driveway. That’s when I first met Ugly Cat, standing at the edge of the pool of light from the open garage door. She meowed piteously but kept her distance. I saw that she had been badly wounded. She was dragging her right back leg, and one eye was just a bloody pulp. She looked like she had been in a fight or perhaps hit by a car. I didn’t want to leave her to suffer, but she would not let me get close. After a minute or so, she stumbled off into the darkness, leaving a trail of blood in the snow.

“Poor critter,” I thought. “She won’t last long out there.” There was nothing I could do for her. By morning, the snow had covered  her tracks, and after a day or two I forgot about her. But she had not forgotten me.

One morning, several months later, we met again. She was standing by the edge of our garden pond, looking at me cautiously, wondering whether to take her eyes—er—eye—off me to risk a drink.

“It’s OK,” I said. “Help yourself.” I noticed that her wounded eye had healed. The eye was gone, but the socket looked clean and not infected. I noticed also that, although she still limped, she was moving better. “How on earth did you survive the winter?” I wondered. This little animal was a survivor, and at least she deserved respect. “You’re welcome to have a drink from the pond whenever you want,” I told her. (You shouldn’t give feral cats milk.) But I really didn’t want her to become too friendly.

That did not seem to be a problem—the cat wasn’t interested in being too friendly either. She could look after herself. I left some scraps of food out for her, but she ignored them. She was not as hungry as she looked.

Later I found out why. When she wasn’t drinking from my pond, she would help herself to the local dogs’ food while they watched in frustration. You didn’t mess with this cat. Nobody owned her, and she didn’t seem to want to belong.

Ugly Cat hung around the neighborhood all through the spring. I began calling her “that Ugly Cat,” and the name stuck. She would disappear for days but would always show up again, looking for a handout. But she didn’t grovel—if nothing was forthcoming she would, so to speak, shrug her shoulders and limp away. She obviously wasn’t starving. In fact, she seemed to be putting on weight.

One day in early summer, I noticed a change. She came around meowing as usual. However, this time there was a different tone to it—more insistent and demanding. I got the impression that if a cat could tug at your trouser leg, she would have done it. It was if she was saying, “I want some food, and I want it NOW!”

She also seemed to be staying around our house more. One morning I discovered why. While watering the flowerbeds, I found two kittens under a bush. Ugly Cat soon ran up and stood guard. One of the kittens looked like her. The other was the same color as a local fat cat, who spends all day lying around the house but obviously gets out at night. I understood now why Ugly Cat needed food. She had extra mouths to feed. I gave in and bought several cans of cat food, much to the amusement of my wife, who told everyone, “He’s just a big softie.” 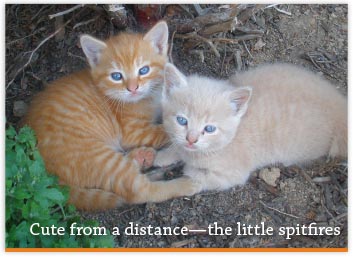 As is the way with cats, Ugly Cat had brought her kittens close to our house because she thought they would be safe. “You know,” I told her, “this really isn’t such a good place to bring your children.” Their shelter was only a few feet from the highway. It normally isn’t too busy, but a bridge over the river was under repair, and so a steady stream of traffic went by our house. I thought it was only a matter of time before I would be scraping the kittens off the road. However, they had inherited their mother’s ability to survive.

My sister, who knows about cats, told us we shouldn’t leave the kittens with their mother longer than necessary. They learn fast, and if you leave them too long, they will never become domesticated. Yeah, right, but what were we going to do with them? I didn’t want one cat, let alone three.

My daughter thought she could find homes for the kittens but was not able to pick them up for a few days. She suggested I take them from their mother as soon as they could feed themselves. When they could, they were ready to leave the nest. But moving them was easier said than done. The two kittens were cute from a distance, but when I tried to pick them up they hissed, spat, and tried to scratch me with their tiny claws. These were wild animals. Eventually I extracted them and put them in a large box in the garage. Ugly Cat didn’t seem to care. She probably wanted to be rid of them so she could resume her vagabond lifestyle.

My daughter and granddaughters eventually came to pick up the kittens. “Be careful,” I warned them. “They may look adorable, but they are lethal.” Sure enough, the little spitfires resisted my granddaughters’ attentions at first. But within half an hour, both were purring contentedly as they rode off to their new homes.

The cat comes back

Two down—one to go. Except Ugly Cat won’t go. She disappears for days but always comes back expecting a handout. We now keep several cans of cat food on hand. Against my better judgment, I find myself becoming rather fond of Ugly Cat. I have a feeling that she may be around for a while, never quite belonging but knowing where to come when she does need help. I have even given her a new name, because “Ugly Cat” began to sound unkind. It so happens that there is a Jamaican fruit called an “Ugli.” It is a hybrid variety—a cross between grapefruit (which I am also allergic to) and oranges (her color). Perfect—Ugli it is!

I have made an effort to reform Ugli, but she only listens long enough to eat. Then she is off on her wanderings. It looks like she is pregnant again (sigh!). I told her sternly not to expect us to find homes for the kittens this time, but we probably will. (Update: We did – five this time. If this goes on, a visit to the vet is in Ugli’s future.)

This tough little cat reminds me of many people I have known in my years as a minister. Wild, independent, tough survivors—living on the edge of a church community but never joining. Life has not been kind to them, and for all sorts of reasons, they are reluctant to make a commitment. But they know where to come when they need help. They can be annoying, and it is tempting to want to push them away. But we must not do that. They may not have accepted God’s grace, but they have not rejected it either. My friend, Professor Eddie Gibbs, has a saying “Treat everyone as if they were Christians until they  find out that they are not.”

Because you just never know.