Let’s look at a passage that is often interpreted as proving that all who die without having come to faith are automatically damned. It is the story of Lazarus and the Rich Man, in which Abraham tells the rich man there is a great gulf fixed that keeps those in Hades separate from those who are with Abraham. It is found in Luke 16:19-31. Before the story begins, however, we can back up a few verses to get an idea of whom Jesus was talking to when he told this story and what was the subject that prompted him to tell it.

Jesus wants them to know that “there is more joy in heaven over one sinner who repents than over ninety-nine righteous persons who need no repentance” (verse 7). The pointed remark is not lost on the Pharisees and scribes; they consider themselves righteous and not in need of repentance. Jesus (knowing they are not really righteous) is telling them that heaven is not singing their song.

If the first two parables irritate the Pharisees and scribes, the third one, The Father Who Rejoices Over Finding His Lost Son (commonly known as the Prodigal Son) takes the cake. Here is a father who gives unbridled love and unconditional forgiveness to a son who dishonored him, wasted half his assets and dragged the family name through the mud. It was a scandalous story that trampled on any sense of common decency, dignity and honor. When Jesus finishes telling it, he turns to his disciples and addresses them with yet another story (Luke 16:1). But the Pharisees are still listening (verse 14).

The moral of this story, Jesus says, is that you cannot serve both money and God; you will find yourself devoted either to the one or to the other, not both (verse 13). If you love money, you will not love God. The Pharisees heard everything, but learned nothing. Instead of repenting so that there might be joy in heaven, they ridiculed Jesus. His words were utter foolishness to them, because they were lovers of money (verse 14).

Responding to their ridicule, Jesus says, “You are those who justify yourselves in the sight of others; but God knows your hearts; for what is prized by human beings is an abomination in the sight of God” (verse 15). He goes on to point out that the Law and the Prophets stand as witnesses that the kingdom of God has arrived and that everyone is urgently piling into it (verses 16-17). His implied message: “Because you prize the things of men, not the things of God, you are rejecting God’s urgent summons to enter his kingdom, which can be done only through me.”

The next statement (verse 18), which cites divorce and adultery, might at first appear to be completely out of context. More likely, it serves as a further declaration that the Law and the Prophets are in fact part and parcel with the kingdom of God, and that in rejecting the Messiah the Jewish religious leaders have “divorced” the Law and the Prophets, which witness to him, from the kingdom of God, and in so doing have rejected God (likened to adultery throughout the Old Testament; compare Jeremiah 3:6, etc.). Now, as the coupe de grace he tells the story of Lazarus and the Rich Man.

A tale of unbelief 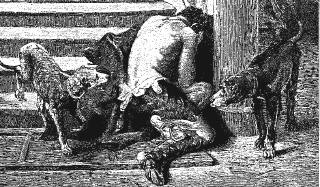 There are three characters in the story, the rich man (representing the Pharisees who love money), the miserable beggar Lazarus (representing a class of people despised by the Pharisees), and Abraham (whose bosom or lap was a Jewish figure of comfort and peace in the afterlife).

And the point Jesus uses the story to make is the same point he has been making all along: You consider yourselves the high and mighty blessed of God, but the truth is you love money and hate God—that is why you are so rankled that I spend my time in fellowship with unvarnished sinners, this is why you despise your fellow human beings and will not humble yourselves and believe in me and find true riches.

But back to the story. The beggar dies. But then, without missing a beat, Jesus again pokes the Pharisees in the eye by saying, “… and was carried away by the angels to be with Abraham” (verse 22). This is, as usual with Jesus’ stories, exactly the opposite of what the Pharisees expected would happen to a man like Lazarus. Such people were poor and diseased beggars because they were under God’s curse, they assumed, and therefore it is only natural that such people go to be tormented in Hades when they die.

“Not so,” says Jesus. “Your worldview is upside down. You know nothing of my Father’s kingdom. Not only are you wrong about how my Father feels about the beggar, but you are wrong about how my Father feels about you.” Jesus completes the turnabout by telling them that the rich man also died and was buried, but he, not the beggar, is the one who finds himself being tormented in Hades. And Jesus draws it out. From his torments in Hades, the rich man looked up and saw Abraham far off with none other than Lazarus by his side. He cries out, “Father Abraham, have mercy on me, and send Lazarus to dip the tip of his finger in water and cool my tongue; for I am in agony in these flames” (verses 23-24).

But Abraham tells him the way things stand. “All your life you loved riches and had no time for the likes of Lazarus. But I do have time for the likes of Lazarus, and now he is with me, and you have nothing.” And then comes the out-of-context proof text: “Besides all this, between you and us a great chasm has been fixed, so that those who might want to pass from here to you cannot do so, and no one can cross from there to us” (Luke 16:26).

Have you ever wondered why anybody could possibly want to pass from “here to you?” It is obvious why someone might want to cross from “there to us,” but from “here to you” makes no sense. Or does it? Abraham began his words to Lazarus by addressing him as “child,” then points out to him that not even those who might want to get to him are able to because of the great chasm.

The Bridge across the chasm

There is one who crosses chasms for the sake of sinners. “For God so loved the world that he gave his only Son, so that everyone who believes in him may not perish but may have eternal life” (John 3:16). God gave his Son for sinners, not just for sinners like Lazarus, but for sinners like the rich man, too. But the rich man doesn’t want the Son of God. The rich man wants what he always wanted—his own comfort at the expense of others, which is exactly the opposite of what the Son of God wants.

Jesus’ condemnation of the unbelief of the Pharisees in this story concludes with the rich man arguing that if someone would warn his brothers, they would not come into the place where he was. “They have Moses and the Prophets; they should listen to them,” Abraham tells him. (Remember Jesus’ statements in verses 16-17? The Law and Prophets are nothing other than a testimony to him. See John 5:45-47 and Luke 24:44-47.)

“No, Father Abraham, but if someone goes to them from the dead, they will repent” (Luke 16:30). “He said to him, `If they do not listen to Moses and the prophets, neither will they be convinced even if someone rises from the dead’ ” (verse 31). And they didn’t. The Pharisees conspired with the scribes and the chief priests to have Jesus crucified, conspired to have soldiers lie about his resurrection (Matthew 27:62-66), and proceeded to persecute and kill those who became believers.

There is a bridge across the chasm, the bridge across all chasms. The bridge is Jesus. But the rich man (the Jewish religious leaders who constantly oppose Jesus) is not interested in putting his faith in Jesus. Permit me to paraphrase Abraham’s reply to the rich man:

“Look, friend, you refuse to come to Christ, so there is no place left for you but right where you are. You won’t even admit that you need forgiveness. You still want exactly what you always wanted—everybody else zipping around waiting on you hand and foot.You can’t get over here because you won’t go anyplace where you’re no better than old Laz the bum. We can’t get where you are to help you because you are precisely nowhere. You made your own chasm to separate yourself from who you are in Christ because you won’t come to him to have life.

“You still think like you always thought—that you are something special and Laz here is a nobody, the dirt under your sandals. And now you’re still so convinced you’ve got it all together that you can’t even see that you’ve been the nobody all along and Laz the loser is the one who’s “in like Flint” with me. Well, pal, you’ve still got just what you’ve always had—nothing, nothing that matters, anyway.

“What’s that? Now you want Laz to run some errands to warn others like you? Are you kidding? They won’t listen. They’ve got Moses and the Prophets who told them Messiah would come. If they won’t listen to them, you think they’re going to listen to Laz? Forget about it. What’s that? If someone comes back from the dead they’ll listen to him? Oh really? Well, guess what? That’s just what Jesus did, came back from the dead, and yet there you are, over there in Nowhereland because you won’t put your trust in him.”

Even if you don’t like my interpretation of this passage, you still have to admit one thing: it is bad business to base a doctrine on one verse alone, and especially on one in a story designed to make a different point altogether. This story is primarily about the refusal of the Jewish leaders to believe in Jesus and the willingness of others to do so, and secondarily about the reversal of common assumptions about riches being a sign of God’s favor.

It is not there to paint us a portrait of heaven and hell. It is a parable of judgment against the unbelieving Israelite leadership and the unkind rich, using common Jewish imagery of the afterlife (Hades and “being with Abraham”) as a literary backdrop to make the point. In other words, Jesus was not commenting on the validity of Jewish imagery of the afterlife; he was simply using that imagery as scenery for his story.

Jesus was not in the business of satisfying our itching curiosities about what heaven and hell must be like. He was in the business of filling us in on God’s secrets (Romans 16:25; Ephesians 1:9, etc.), the mystery of the ages (Ephesians 3:4-5)—that in him, Christ, God has always been reconciling the world to himself (2 Corinthians 5:19). Our preoccupation with otherworldly geographical trivia leads us away from the very point missed by the rich man in the story: Believe in the One who came back from the dead.