Luke begins his book with dramatic announcements: angelic messages, songs of praise, and miracles. This is only the beginning, for Luke has equally dramatic events to report for the birth of Jesus. First, he sets the scene by telling us why Joseph and Mary went to Bethlehem.

“In those days Caesar Augustus issued a decree that a census should be taken of the entire Roman world. (This was the first census that took place while Quirinius was governor of Syria.) And everyone went to their own town to register” (Luke 2:1-3). Roman taxation was based on population counts.

Unfortunately, we do not have any Roman records of this census, so we do not know the date. For one thing, the census may not have been done in all regions in the same year. Luke’s words could mean “that Caesar decreed that the enrollment, which had previously been going on in some parts of the empire, should now be extended to all parts” (Ben Witherington, “Birth of Jesus,” Dictionary of Jesus and the Gospels, p. 67). In Egypt, a census was conducted every 14 years.

Luke, writing in the style of a Greek historian, indicates dates by political rulers and events. Quirinius ordered a census in A.D. 6-7 (mentioned in Acts 5:37), but we do not have any evidence that Quirinius was governor when Herod was alive. He was a consul at that time, and may have had a temporary authority over Syria.

If “everyone” went to their own town for this census, it was presumably required (registration by family origin was a Jewish, not a Roman custom), and most likely at a time of the year when people could travel to their respective cities.

“So Joseph also went up from the town of Nazareth in Galilee to Judea, to Bethlehem the town of David, because he belonged to the house and line of David” (Luke 2:4). Many other people would have also been of the line of David, but if they lived in Jerusalem, only five miles away, they could register for the census without having to spend the night in Bethlehem.

“He went there to register with Mary, who was pledged to be married to him and was expecting a child” (v. 5). Joseph and Mary were not yet officially married, but for the census they were counted together. Perhaps Joseph did not want to leave Mary alone in Nazareth, where she might face ridicule and shame. And perhaps they knew, as others did, that the Messiah would be born in Bethlehem (Matt. 2:5; Micah 5:2). The political decree therefore served the purpose of God, who was working behind the scenes as well as in more spectacular ways.

The birth of Jesus

We do not know how long Joseph and Mary stayed in Bethlehem. They probably traveled well before the baby was due. Luke just tells us, “While they were there, the time came for the baby to be born, and she gave birth to her firstborn, a son. She wrapped him in cloths and placed him in a manger, because there was no guest room available for them” (vv. 6-7). Bethlehem was small and off the main road; it may not have had a real inn.

Poor people often did not have a barn for their animals, so they had a manger inside the home. Mary used the manger because the guest room was either not large enough or occupied by others. Luke describes this in a matter-of-fact way, as if nothing was too far out of the ordinary.

In the vast majority of ancient Near-Eastern peasant homes for which we have archaeological and literary evidence, the manger was within the home, not in some separate barn. The animals as well as the family slept within one large enclosed space that was divided so that usually the animals would be on a lower level, and the family would sleep on a raised dais…. We should probably envision Mary and Joseph staying in the home of relatives or friends, a home which was crowded due to the census…. Mary gave birth to her child perhaps in the family room and placed the baby in the stone manger. (Witherington, 69-70)

The point is that Jesus (although a king) was born in humble circumstances. Even in his family’s home town, he was in temporary accommodation, with an improvised bed. One lesson we see here is: “Importance is not a matter of one’s environment or the supposed status that things bring. Rather, importance is a function of one’s role in God’s work” (Darrell Bock, Luke, NIV Application Commentary, p. 86). 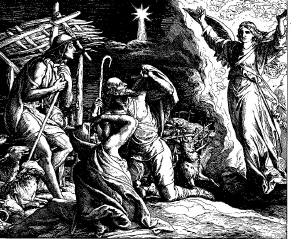 Luke now brings the supernatural into the story: “There were shepherds living out in the fields nearby, keeping watch over their flocks at night. An angel of the Lord appeared to them, and the glory of the Lord shone around them, and they were terrified” (2:8-9).

Although the Bible usually portrays shepherds in a positive way, society often looked down on them, as they do the homeless today. Shepherds could not keep ceremonial laws, they moved often, and people didn’t trust them—they weren’t even allowed to testify in court. Due to their occupation, they had not gone to their own town to register for the tax census. (Flocks of sheep were kept year-round near Bethlehem to provide sacrifices at the temple.)

Like most other people, the shepherds were afraid when they saw the angel and the glory of the Lord. But the angel told them: “Do not be afraid. I bring you good news that will cause great joy for all the people. Today in the town of David a Savior has been born to you; he is the Messiah, the Lord. This will be a sign to you: You will find a baby wrapped in cloths and lying in a manger” (vv. 10-12).

The angel announced the good news: the Messiah has been born, he is a Savior for all the people, and this is a reason to have great joy. But most people were totally unaware of the good news. The angel was not sent to everyone—just to a few shepherds who represented all humanity.

It would not be strange to find a newborn baby wrapped in cloths, but it was apparently unusual to find one in a manger. This is the third “sign” (evidence that God was involved) that Luke reports. Bethlehem was small enough that there wouldn’t be very many newborn babies in it, and it was apparently small enough that the shepherds could find the baby without supernatural help.

“Suddenly a great company of the heavenly host appeared with the angel, praising God and saying, ‘Glory to God in the highest heaven, and on earth peace to those on whom his favor rests’” (vv. 13-14). This short song is called Gloria in Excelsis Deo, which is the way it begins in Latin. An army of angels announced peace.

Through the Savior, peace will come not to everyone, but to those God is pleased with (see Matt. 10:34; Luke 12:32). “It is those whom God chooses, rather than those who choose God” (Leon Morris, Luke, rev. ed., p. 95). “Jesus comes for all, but not all respond to and benefit from his coming” (Bock, p. 85). Though we were formerly God’s enemies, we were reconciled to God, given peace with him, through our Savior. The birth of the Savior is certainly a good reason for praising God!

“When the angels had left them and gone into heaven, the shepherds said to one another, ‘Let’s go to Bethlehem and see this thing that has happened, which the Lord has told us about.’ So they hurried off and found Mary and Joseph, and the baby, who was lying in the manger” (Luke 2:15-16). This apparently all happened on the evening after Jesus’ birth.

“When they had seen him, they spread the word concerning what had been told them about this child, and all who heard it were amazed at what the shepherds said to them” (vv. 17-18). So the shepherds became evangelists for a time, telling people about the angels, the singing and the baby. As in previous cases, everything the angel said was true.

People were amazed at the story, but did they believe it? We do not know. Amazement is often short-lived (see Luke 4:22, 28). Mary, however, “treasured up all these things and pondered them in her heart” (2:19). Mary, the model of a good disciple, not only remembered these events, she also thought more about their significance. What manner of Messiah would her child be? The story is just beginning.

So the shepherds returned to their flocks and fields, “glorifying and praising God for all the things they had heard and seen, which were just as they had been told” (v. 20). God had kept his word. The shepherds went back to their work, filled with hope and confidence that deliverance would come.

Meanwhile, Joseph and Mary had to complete the assignment that Gabriel had given them: “On the eighth day, when it was time to circumcise the child, he was named Jesus, the name the angel had given him before he was conceived” (v. 21).