Jesus asked his disciples, “Who do people say that I am?” That question confronts us, too: Who is this man? What authority does he have? Why should we trust him?

The Christian faith centers on Jesus Christ. We need to understand what kind of person he is. 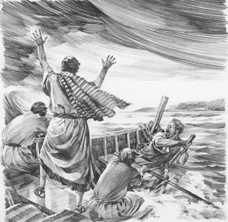 Fully human—and then some

Jesus was born in the normal way, grew in the normal way, got hungry and thirsty and tired, ate and drank and slept. He looked normal, talked in ordinary language, and walked in the normal way. He had emotions such as compassion, surprise, sorrow and apprehension (Matthew 9:36; Luke 7:9; John 11:38; Matthew 26:37). He prayed to God, as humans need to. He called himself a man and other people called him a man. He was a human being.

But Jesus was such an extraordinary human that after he ascended to heaven, some people claimed he was not human after all (2 John 7). They thought that Jesus was so holy that surely he would have nothing to do with flesh, with its dirt, sweat, digestive functions and imperfections. Perhaps he merely appeared to be human, in the way that angels sometimes appeared as humans, without actually becoming human.

So the New Testament makes it clear that Jesus was really a human. John tells us, “The Word became flesh” (John 1:14). He didn’t just appear as flesh, or clothe himself in flesh. He became flesh. “Jesus Christ has come in the flesh” (1 John 4:2). We know, says John, because we saw him and touched him (1 John 1:1-2).

Paul said that Jesus was “made in human likeness” (Philippians 2:7), “born under the law” (Galatians 4:4), “in the likeness of sinful man” (Romans 8:3). Since he came to save humans, the author of Hebrews reasons, it was necessary that he “shared in their humanity” (Hebrews 2:14-17).

Our salvation depends on the reality of Jesus’ humanity. His role as our intercessor, our high priest, depends on his experience as a human (Hebrews 4:15). Even after his resurrection, Jesus had flesh and bones (John 20:27; Luke 24:39). Even in heavenly glory, he continues to be a human (1 Timothy 2:5).

“Who is this fellow?” asked the Pharisees when they heard Jesus forgive sins. “Who can forgive sins but God alone?” (Luke 5:21). Sin is an offense against God, so how could a human say the offense is removed from the record? It was blasphemy, they said. Jesus knew what they thought about it, but he forgave sins anyway. He even implied that he had no sins of his own (John 8:46). He made some astonishing claims:

If he were merely a human, his teaching was arrogant and sinful. But Jesus backed up his words with some amazing actions. “Believe me when I say that I am in the Father and the Father is in me; or at least believe on the evidence of the miracles” (John 14:11). Miracles can’t force anyone to believe, but they can provide powerful supporting evidence.

To show that he had the authority to forgive sins, Jesus healed a paralyzed man (Luke 5:23-25). His miracles give evidence that what he said about himself is true. He has more-than-human power, because he is more than a human. The claims that would have been blasphemous in anyone else were true for Jesus. He could speak like God and act like God because he was God in the flesh.

Who did he think he was?

When Peter said, “You are the Christ, the Son of the living God,” Jesus answered, “Blessed are you, Simon son of Jonah, for this was not revealed to you by flesh and blood, but by my Father in heaven” (Matthew 16:16-17). Jesus was the Son of God. He was the Christ, the Messiah – the person uniquely anointed by God for a special mission.

When Jesus called 12 disciples, one for each tribe of Israel, he did not count himself among the 12. He was above them, for he was above all Israel. He was the maker and builder of the new Israel. At the last Supper, he proclaimed himself to be the basis of the new covenant, a new relationship with God. He saw himself as the focal point of what God was doing in the world.

Jesus spoke boldly against traditions, against laws, against the temple, against religious leaders. He demanded that his followers abandon everything to follow him, to put him first in their lives, to give him complete allegiance. He spoke with the authority of God – but he spoke on his own authority. He had authority equal to God.

Jesus claimed to be alive before Abraham was born: “I tell you the truth,” he said, “before Abraham was born, I am!” (John 8:58). The Jewish leaders thought that Jesus was claiming something divine, and they wanted to kill him (verse 59). The phrase “I AM” is an echo of Exodus 3:14, where God revealed his name to Moses: “This is what you are to say to the Israelites: ‘I AM has sent me to you.’” Jesus used this name for himself.

Jesus said he shared glory with God before the world began (John 17:5). John tells us that he existed even in the beginning of time, as the Word (John 1:1). John tells us that the universe was made through the Word (John 1:3). The Father was the Designer, and the Word was the Creator who carried out the design. “All things were created by him and for him” (Colossians 1:16; 1 Corinthians 8:6). Hebrews 1:2 says that God made the universe through the Son.

Who is Jesus? He is a divine being who became flesh. He was in the beginning with God; he was the Creator of all, the Author of life (Acts 3:15). He is exactly like God, has glory like God, and has powers that only God has. Little wonder that the disciples concluded that he was God, even in the flesh.

The New Testament gives elaborate praises to Jesus Christ, with doxologies that are normally reserved for God: “To him be glory for ever and ever. Amen” (2 Timothy 4:18; 2 Peter 3:18; Revelation 1:6). He has the highest title that can ever be given (Ephesians 1:20-21). Even if we call him God, that title is not too high.

In Revelation, equal praise is given to God and to the Lamb, implying equality: “To him who sits on the throne and to the Lamb be praise and honor and glory and power, for ever and ever!” (Revelation 5:13). The Son must be given equal honor with the Father (John 5:23). Both God and Jesus are called the Alpha and the Omega, the beginning and end of everything (Revelation 1:8, 17; 21:6; 22:13).

The New Testament often uses Old Testament passages about God and applies them to Jesus Christ. One of the most striking is this passage about worship:

God exalted him to the highest place and gave him the name that is above every name, that at the name of Jesus every knee should bow, in heaven and on earth and under the earth, and every tongue confess that Jesus Christ is Lord, to the glory of God the Father. (Philippians 2:9-11, quoting Isaiah 45:23)

Jesus will get the honor and respect that Isaiah said would be given to God.

Several New Testament verses call Jesus God. John 1:1 says, “the Word was God.” Verse 18 says, “No one has ever seen God, but God the One and Only, who is at the Father’s side, has made him known.” Jesus is the God who made the Father known. After Jesus was resurrected, Thomas recognized him as God: “Thomas said to him, ‘My Lord and my God!’” (John 20:28).

Paul says that the patriarchs are great because “from them is traced the human ancestry of the Messiah, who is God over all, forever praised!” (Romans 9:5). In Hebrews, God himself is said to call Jesus God: “About the Son he says, ‘Your throne, O God, will last for ever and ever’” (Hebrews 1:8).

“In Christ,” Paul said, “all the fullness of the Deity lives in bodily form” (Colossians 2:9). Jesus Christ is fully divine, and even now has bodily form. He is the exact representation of God – God made flesh. If Jesus were only a human, it would be wrong to put our trust in him. But because he is divine, we are commanded to trust in him. He is utterly trustworthy, because he is God.

As you can see from the scriptures above, the biblical information about Jesus is scattered throughout the New Testament. The picture is consistent, but it is not all drawn together in one place. The early church had to put the facts together. They drew these conclusions from the biblical revelation:

The Council of Nicea (A.D. 325) declared that Jesus, the Son of God, was divine, of the same essence as the Father. The council of Chalcedon (A.D. 451) explained that he was also human:

Our Lord Jesus Christ is one and the same Son; the same perfect in Godhead and the same perfect in manhood, truly God and truly man… begotten of the Father before all ages as regards his Godhead and… begotten of the Virgin Mary the Theotokos [the “God-Bearer”] as regards his manhood; one and the same Christ, Son, Lord, only-begotten, made known in two natures… the difference of the natures being by no means removed because of the union but the property of each nature being preserved and coalescing in one person.

The last part was included because some people said that the divine nature so overpowered Jesus’ human nature that he wasn’t really human. Others said that the two natures combined to form a third nature, so that Jesus was neither human nor divine. The biblical data says that he was truly human, and truly divine, and this is what the church must say, too.

How can this be?

Our salvation depends on Jesus being both human and divine. But how can this be? How can someone infinite become finite? How can the holy Son of God become a human, in the likeness of sinful flesh?

Our question comes mainly because the only humanity that we can see now is woefully corrupt. But this is not the way God made it. Jesus shows us what true humanity is. For one thing, he shows us a person who is completely dependent on and submissive to the Father. This is the way humanity ought to be.

Jesus also shows us what God is capable of doing. He is able to become part of his creation. He can bridge the gap between the uncreated and the created, between the holy and the sinful. What we might think is impossible, is possible with God. Jesus also shows us what humanity will be in the new creation. When he returns and we are resurrected, we will look like him (1 John 3:2). We will have bodies like his glorious body (1 Corinthians 15:42-49).

Jesus is our trailblazer, showing us that the way to God is through Jesus. Because he is human, he sympathizes with our weaknesses, and because he is divine, he effectively intercedes for us at God’s right hand (Hebrews 4:15). With Jesus as our Savior, we can be confident that our salvation is secure.