Is God a nice old man in the sky? A cranky being who wants to dish out “justice” on you? Is he like a human father or mother?

Charles Haddon Spurgeon was England’s best-known preacher for most of the second half of the 19th century. In a sermon he gave when he was only 20, Spurgeon declared that the proper study for a Christian is the Godhead. Here is a quote from that sermon—it’s one of my favorites:

The highest science, the loftiest specu­lation, the mightiest philosophy, which can ever engage the attention of a child of God, is the name, the nature, the person, the work, the doings, and the existence of the great God whom he calls his Father. There is something exceedingly improving to the mind in a contemplation of the Divinity. It is a subject so vast, that all our thoughts are lost in its immensity; so deep, that our pride is drowned in its infinity. Other subjects we can compass and grapple with; in them we feel a kind of self-content, and go our way with the thought, “Behold I am wise.” But when we come to this master-science, finding that our plumb-line cannot sound its depth, and that our eagle eye cannot see its height, we turn away with the thought, that vain man would be wise, but he is like a wild ass’s colt; and with the solemn exclamation, “I am but of yesterday, and know nothing.” No subject of contemplation will tend more to humble the mind, than thoughts of God.

As have many other preachers and teachers, Spurgeon reminds us that the great and central question of Christianity is this: “Who is God?”

God’s own answer is not a proposition, but a person: the incarnate Son of God, Jesus Christ. As the self-revelation of God, Jesus is the focal point of our knowledge of God’s nature. Jesus, who takes us to the Father and sends us the Spirit, teaches us to ask, “Who is God?,” then bids us look to him for the definitive answer.

Throughout history, many great thinkers pondered the question, “Who is God?” Unfortunately, they often did not make Jesus the center of their investigations. Working from the central revelation of God in Jesus Christ, the doctrine of the Trinity was developed to answer the false reasoning and heretical ideas about God that had infiltrated the church in its first three centuries. Though the Trinity doctrine doesn’t answer all questions about God’s nature, it helps us focus on who God is without wandering away from sound doctrine.

The early Christians were not unique in developing errors of reasoning as they pondered the nature of God. Theologians and philosophers of every age got it wrong, and our time is no exception. Old ideas have a way or repackaging themselves and worming their way into contemporary thinking. It is important that we are aware of two errors that are prevalent in our day. Both lead to wrong conclusions and a distorted picture of who God is.

Unfortunately, a belief in the divine spirituality of everything (often referred to as “the Universe”) is common today. Hungry for spirituality and put off by traditional religion, many people are seeking “enlightenment” in obscure and fringe ideas. Go into any large bookstore and you’ll find sections devoted to fantasy fiction and the occult. Video gamers are obsessed with ever more bizarre themes and fantastic creatures wielding supernatural powers. Technology is blurring the line between fantasy and reality, and the spiritual landscape is becoming cluttered with offbeat ideas.

The same thing happened in the early years of the church. People had an appetite for magic and mystery. As a result, many non-apostolic epistles and gospels were in circulation—offering a mix of truth and bizarre ideas about God, reflecting the popular culture of that day. Paul reminds us what happens when people lose their spiritual moorings:

For although they knew God, they neither glorified him as God nor gave thanks to him, but their thinking became futile and their foolish hearts were darkened. Although they claimed to be wise, they became fools and exchanged the glory of the immortal God for images made to look like a mortal human being and birds and animals and reptiles. (Romans 1:21-23)

A second prevalent error in our day concerning the nature of God is conceiving of God as a spirit force that dwells in everyone individually. From this perspective, God is viewed as a genie that we carry with us, making use of him as the need arises. It’s as though God is a cosmic smartphone with all kinds of useful apps.

Following this line of faulty reasoning, we wrongly conclude that when we travel, we are taking God somewhere that he is not already present. God becomes dependent on us and limited by our limitations. As a result, God can’t be more faithful than we are. Though this false idea may boost our sense of self-importance, it is a false idea that negates the grace of God.

The truth of God’s nature, revealed in Jesus, is the opposite of this error. As the authors of the New Testament remind us, God remains faithful even when we are faithless. Our true importance is related to our identity as children of the God who not only dwells within us by his Spirit, but far beyond us. Our calling is to join God in what he is doing. We do so with great anticipation knowing that he has been at work long before we arrive on the scene. We are greatly privileged to share in what the Holy Spirit is doing to turn people around and to draw them into a reconciled relationship with the Father and the Son.

The more clearly we understand who God is, the better will be our understanding of who we are and of our calling to live in communion with Christ by the Holy Spirit. 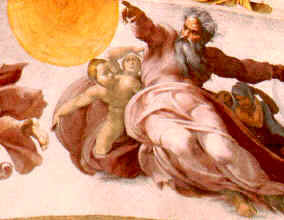 We are convinced, from Scripture, that God passionately loves you, even though he knows all the wrong stuff you’ve done. He wants to spend all eternity with you, and he has already prepared a place at the banquet table for you. He eagerly awaits for his long-lost children to come home, to rejoice in his grace and mercy, to enjoy their place in the family of love and joy.

To help you learn more about the One who loves you, here are a few of the articles we have on this topic:

Some articles about the doctrine of the Trinity:

The biggest question about God: Why does God allow suffering? Check out these articles:

But what difference does it make? Here are a few articles about how we respond to the God who loves us so much that he sent his Son to rescue us from our self-made mess:

For a 424-page compilation of articles about God and theology in one PDF file, click here.