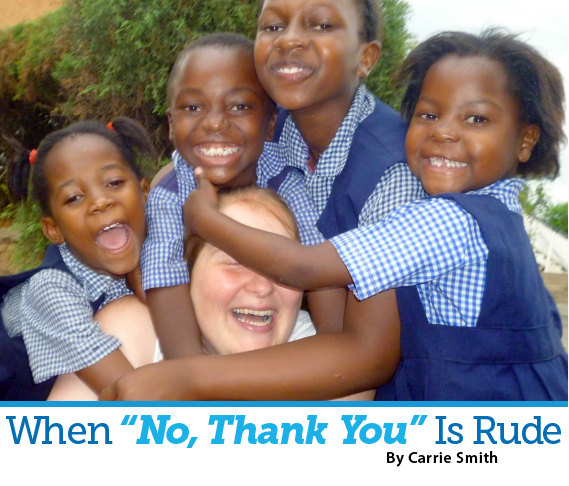 I grew up using the phrases “please,” “thank you,” “yes, sir” and “yes, ma’am.” These were the polite things to say, especially when I wanted to show respect to my elders or those in authority. These lessons are still valuable to me in adulthood, and I have tried to instill them in the children I have had the privilege to work with and mentor along the way.

I was a little surprised, though, when I found myself in a place where some of my ideas about politeness didn’t apply. My friend Kayla (Shallenberger) Elliott and I taught school at Young Ambassadors Private Primary School (YAPPS) in Malawi in southeastern Africa, and we found a much different standard of politeness there. The school’s Director, Fadrick Nihaka, who is also a church pastor, and his wife did everything in their power to make our stay comfortable. I was not used to such treatment and it felt odd to receive so much attention. Kayla and I both wanted to fit in, to live simply and to not be a burden to anyone, but we didn’t initially realize our idea of burden was different from theirs.

One of the first culture shocks was when Dorothy was hired to be our housekeeper and cook. Neither Kayla nor I had ever had someone to help us with housework. We were the domestic staff for our parents; doing chores, keeping our rooms clean, doing our own laundry and helping out around the house. So to have someone take care of these needs for us seemed excessive. What we didn’t understand, though, is having a house caretaker is a part of Malawi culture. It is expected, and even our housekeeper had a house girl who helped care for her young son and do housework at Dorothy’s home while she was at work.

Our first reaction to Dorothy’s service was to say, “No, thank you” and try to do the work ourselves, or at least to help her with various chores. What we didn’t realize was that saying, “No, thank you” to Dorothy meant we were rejecting the provisions Pastor Nihaka and his wife made for us. In our attempt to be gracious and polite, we were actually communicating a lack of respect for them and their culture.

I am glad to say that Kayla and I learned quickly and soon began to appreciate Dorothy and all she did for us. We chose to learn from her, asking many questions about her life and culture. We continued to learn this “new” politeness at church as well. Food and drinks were served after the first church service we attended in Malawi. This is something Kayla and I were used to, so we didn’t think much of it when we left to get our jackets; we wanted to be polite and let others go first. When we came back, though, no one had eaten yet because they were waiting for us, their guests, to go first. Oops.

The hardest place for us to learn not to say, “No, thank you,” though, was at school with the children. Every day students would try to give us part of their lunches, one of their favorite school supplies or some other item that held great value to them. Kayla and I did not want to take food from the children because they didn’t have that much to begin with. What we failed to realize was our “polite” refusal of their gifts was received as rejection. This was the last thing we wanted, yet we knew we could not take their food or limited school supplies from them. So we compromised. If a child tried to give us a package of cookies, we said we would accept only if we could share them. If they wanted to give us a sticker or bracelet, we made sure they had something to match or we would give stickers in return (Kayla was smart and brought a lot of stickers with her).

The results of no longer saying, “No, thank you” were incredible. Instead of feeling uncomfortable about being given gifts, we joined in the excitement and joy the children felt when giving. We got to see the beautifully radiant smiles of the children when we accepted a gift, and we began to see them sharing with one another as well. We reciprocated with gifts of hugs and spending time with the children during recess and after school. As we learned to accept their gifts, we began to recognize that the children themselves felt honored and accepted by us. This was important as some of the children rarely felt acceptance, a fact that still breaks my heart. Yet, even in that I praise God because he allowed Kayla and me to participate with him in showing his children they are accepted, valued and dearly loved.

God gave us a glimpse into his heart for his children and the delight he has when we accept his gifts instead of “politely” saying, “No, thank you.” Now, when I am given a gift, I am more mindful of the gift-giver’s heart and identity as a child of God rather than any temporary discomfort I may feel at the moment. I learned that receiving a gift is just as important as giving one.