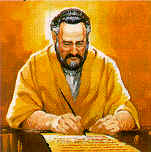 Biblical authors put much thought and effort into composing
God’s Word. They wanted to make sure that the reader would clearly understand
and remember the important points of Scripture. Since we read the Old Testament
in translation, however, it is not always possible for us to recognize the
diligence of these writers. Their skill often lies hidden in the Hebrew
language.

As an example, let’s take a close look at the meaning of the
Hebrew words in Genesis 9:6. By doing so, we will gain greater respect for the
communication skills of the writers. The New International Version reads: “Whoever sheds the blood of man, by man
shall his blood be shed.” This is a good translation. However, it lacks
the compactness and wordplay of the original Hebrew text.

In the Hebrew, this saying consists of the following words:

This type of arrangement is called a chiasm or an “envelope
structure” because the same word is used at the beginning and at the end to
envelop the phrase. This poetic device lends a rhythmical quality to the text,
making it easier to read and remember.

A second poetic device is used inside this particular
envelope. It is called “paronomasia” or “a play on words.” The words that are
played on in this verse are “blood” and “human.”

The Hebrew word for “blood” is dam. The word used
here for human is similar: ‘adam. The saying in Genesis 9:6, then, makes
an important connection between humans and blood.

The life of any flesh is in its blood (verse 4). When Cain
took his brother’s life, God told Cain, “Your
brother’s blood cries out to me from the ground” (Genesis 4:10). Part of
the message of Genesis 9:4-6, therefore, is that the life of humans (‘adam)
is in their blood (dam). The poetic device makes the point easier to
remember.

Plays on words are common in the Hebrew Bible. For example,
when Leah and Rachel name their sons, the names they choose reflect the
situation. Rachel, before naming her son Naphtali, says, “With great wrestlings [naphtulei] I have wrestled [niphtalti] with my sister”
(Genesis 30:8, NKJV). Similar wordplay accompanies the naming of the
other sons (Genesis 29:31-35; 30:1-24).

Like wordplays, envelope structures also permeate the Bible
on many levels. Some are less than a verse long, while others cover entire
chapters. For example, several psalms begin and end with the phrase “Praise the Lord” (Psalms 146–150).

An envelope structure can extend over even larger units. The
book of Job, for example, begins (chapters 1–2) and ends (chapter 42) with narrative written in prose. These
sections of prose narrative form an envelope for the rest of the book (chapters
3–41), which is a debate
written in poetry. Also, the book begins with a description of Job’s family
(Job 1:2) and wealth (verse 3), and concludes with a description of his wealth
(Job 42:12) and family (verses 13-16).

On the greatest level, the first chapters of Genesis
and the last chapters of Revelation form an envelope for the entire Bible. The
Bible begins and ends in paradise. Genesis describes the initial paradise God
created for humans: “In the middle of the garden were the tree of life and the tree of the
knowledge of good and evil. A river watering the garden flowed from Eden”
(Genesis 2:9-10). And in Revelation we
are given a vision of humanity’s ultimate destiny: “Then the angel
showed me the river of the water of life, as clear as crystal, flowing from the
throne of God and of the Lamb down the middle of the great street of the city.
On each side of the river stood the tree of life” (Revelation 22:1-2).