“And there were in the same country shepherds living in the fields, keeping watch over their flocks by night.”

A rough-looking stranger, about 50, trudged into the crowded inn and looked around, squinting into the smoky light from the clay oil lamps set randomly around the room. Abiel and I smelled him before we saw him, and we instinctively shifted our positions to make our little table look smaller. Even so, the stranger made his way over to us and asked, “Could you make room for one more?”

Abiel looked at me. We didn’t want him sitting next to us. He looked — and smelled, well, like a shepherd. But the inn was crowded for the Passover and Unleavened Bread season, and our law tells us to be hospitable to strangers, even if they are shepherds. So Abiel offered him a seat and a drink from our wine flask.

Hebron was a hard 20-mile trip to the south, the place where Abraham buried his wife, Sarah, more than 1500 years ago.

“Got here just before Passover,” Jonathan went on, “and the way this place is crawling with soldiers I can tell you I’m glad to be leaving.” He suddenly swore at the Romans and spat on the ground.

Abiel and I exchanged glances. “If you were here for Passover, you must have felt the earthquake,” I said.

“I felt it,” said the shepherd. “Some say it broke open tombs and let the ghosts out.”

“It damaged the Temple,” said Abiel. “It ripped open the veil in the Holy Place. The priests are keeping everyone away until it’s mended.”

“Well, that won’t bother me,” Jonathan said. “They don’t let the likes of me in there anyway. We’re not good enough for them.” He swore again, this time at the Pharisees and the temple guard.

Typical of his kind, I thought — no manners. No wonder people don’t want shepherds around.

“Let me ask you something,” Jonathan said. “Did either of you see those crucifixions up on Golgotha? Who were those three, anyway?”

Abiel caught my eye, then leaned in closer to the shepherd. “They caught a revolutionary named Barabbas and two of his gang just before Passover. But there was also a popular rabbi they called Jesus. A lot of us hoped he was the Messiah.”

“Messiah?” Jonathan said. A frown crept over his face. “So that would explain all the soldiers. But this Jesus is dead now. Wasn’t much of a Messiah, was he?”

“He was a good man,” Abiel said in low voice, glancing around the room. “And the Romans weren’t worried about him until the Pharisees and the elders and the chief priests brought charges of blasphemy against him.” Abiel looked at me, as if for permission to say more.

“Tell me what?” Jonathan said.

Abiel’s voice dropped to a whisper. “Well, the story got around that if they killed him he would come back to life.”

“Huh?” Now Jonathan quickly surveyed the inn, as if to make sure no one was eavesdropping on our conversation, then leaned in and said quietly, “Go on.”

Abiel continued, his voice barely audible. “Yesterday the tomb was found open and the body was missing.”

“What?” Jonathan narrowed his eyes and stared blankly at the wall behind me. Finally he said, “Tell me, where was this Jesus from?”

“He came down from the north, from Galilee,” I said. “And he was no blasphemer. All he did was go around healing people and preaching about love and kindness. Surely you heard of him — even down there in the hills.”

But the shepherd wasn’t listening. He was staring blankly at the wall behind me. Finally he said quietly, “Where did you say he came from?”

“Galilee,” I repeated. “He was a carpenter’s son from Nazareth.”

Abiel looked at me, then cleared his throat and said, “There’s talk that he might have been born in Bethlehem, though. And that his mother was a virgin.”

Jonathan shook his head slowly. “I wonder,” he mumbled, as though to himself. “Born in Bethlehem — to a virgin. Then it could have been him.”

“Could have been who?” I asked. “What are you talking about, shepherd?”

The shepherd looking meaningfully at our flask of wine. “This Jesus of yours — I think I know who he was. Let me tell you a strange story.

“Like I said, I saw those three crucifixions on Golgotha the other day. The one in the middle, whom you say was Jesus, was already dead, and they were about to finish off the other two. Some women were sobbing and crying under Jesus’ cross. But another woman was standing apart a little farther back, and a young man had his arm around her. As I passed, she looked right at me, and I knew I had seen her before. It was a long time ago.”

Abiel refilled our cups and said, “Go on, shepherd. Tell us your story.”

Jonathan drank, then cradled his cup in both hands, staring into it. “It was back in the days of Herod,” he said. “The one they called the ‘Old Fox.’ I was just a young fellow then. Our family was poor. We made a living looking after the sheep of richer folk.

“One night I was in the hills near Bethlehem with my father and a few of his friends. There was a census on, and you know, and everyone was supposed to go back to their homes to be counted so the Romans could figure out how much tax we had to pay. Well, my father and my uncle and I and some of our friends decided to stay out in the hills until it was over. Fewer heads for the Romans to count.”

We all laughed. Shepherds had the reputation of being rogues.

“Well, this particular night we got the sheep settled down and we were sitting round the fire. The older men were joking and telling stories.

“I was starting to get sleepy when suddenly there was a bright light all around us, and a man dressed in a shining robe appeared out of nowhere. He was glowing, like he had a fire inside him.”

Jonathan nodded. “We were afraid, I can tell you. But the angel said, ‘Don’t be afraid of me. I haven’t come to hurt you. I have brought some good news — wonderful news for everyone.’ 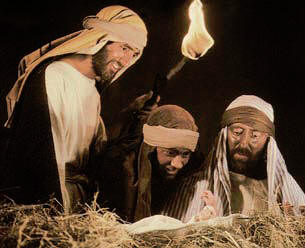 Abiel and I gestured impatiently for the shepherd to go on.

“Well,” Jonathan went on, “the angel said, ‘Today in Bethlehem, a Savior has been born to you. He is the anointed One — the Lord.’”

Again Jonathan nodded. “The angel told us to go see this baby, who would be wrapped in swaddling cloths and lying in a manger in Bethlehem. Then the whole sky was full of angels singing, ‘Glory to God in the highest, and peace on earth to those he favors.’ Then, as suddenly as they appeared, they were gone.

“We hurried to Bethlehem and found a man named Joseph and his wife Mary with their baby wrapped in swaddling cloths lying in a manger in the stable of an inn. The animals had been moved to one end, and one of the stalls had been cleaned out. Mary was young — no more than 15, I suppose. She was sitting on a pile of straw. It was all exactly like the angel had said.

“My father told Joseph about the angel and how it told us to come see them. Joseph said they’d come to Bethlehem for the census, but there’d been no room for them at the inn. The baby was coming, so the owner let them use the stable. Joseph also told us how an angel had told Mary and later told him that she had been chosen to be the mother of the Messiah and that even though she was still a virgin, she would become pregnant with this special child from God.

“Mary had been shocked, Joseph told us, because she had always been a very virtuous person. But she trusted God. Joseph looked at his wife and we could see the love and respect in his eyes.

“I watched Mary while the men were talking, and I was struck by how calm she was. It was like God’s own peace was resting on her. She must have been exhausted, but there was a mysterious beauty about her. I don’t know how else to describe it, but I never forgot her.”

Jonathan looked soberly at Abiel, then at me. “It was Mary I saw at the crucifixion at Golgotha. She was the one with the young man comforting her. She is much older now, but I know it was her.”

“So Jesus…” Abiel began, but Jonathan cut him off.

“Was that baby in the manger, the Savior of his people? I thought he’d been killed years ago when Herod ordered all the boys under age two in Bethlehem murdered.”

Abiel and I must have looked startled. “Oh yes,” Jonathan said. “That old fox heard about the Messiah being born from some wise men from the East. They’d come to honor Jesus, but Herod’s reaction was to see him as a rival and try to kill him. One of my nephews was killed in that massacre.

“But you tell me that this ‘Jesus of Nazareth,’ son of Joseph and Mary, went around doing miracles and people thought he was the Anointed One. And now the authorities have tried to kill him again.”

“But didn’t you say the body has vanished?” asked the shepherd.

“What are you saying?” asked Abiel.

“Just this. If the woman I saw was Mary — and I am sure it was — and the man they crucified was her son, whom I saw on the night he was born, then this didn’t end on that cross. It was no ordinary night when the angels sang to us, and this Jesus was no ordinary baby. The angel told us he was the Messiah, come to save us. And now, even though his enemies crucified and buried him, his body is missing.”

The shepherd finished his drink and stood up. “Well, I’m just an ignorant shepherd. What do I know about these things? But I’ve got a feeling we haven’t seen the last of this Jesus.”