The Return of the Prodigal Son 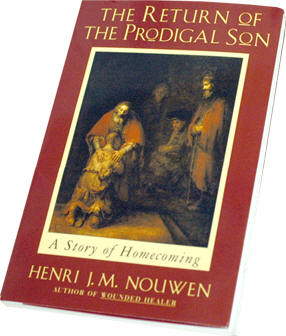 Henri Nouwen (1932-1996), a Dutch Catholic priest, psychologist, professor and author of more than 20 books, was well-loved and widely received in ecclesiastical and secular spheres alike.

He was best known among Protestant pastors for The Wounded Healer, a theology of service expressing the theme of living our brokenness under God’s blessing. His writings and lectures inspired millions with Christ’s message of unconditional love and hope, emphasizing our common woundedness and how our sufferings can serve as a source of strength and healing for each other.

He once observed that many people do not think they are loved or held safe. When suffering comes, they see it as an affirmation of their worthlessness. He then offered Christ’s peace through learning to live our brokenness under God’s blessing, or in new creation, as opposed to remaining largely in the misery of the curse.

He taught that it takes enormous energy to keep saying “no” to the world’s powers. Our hope lies in finding something so real and attractive that we can devote all our energies to saying “yes.” That “something” is the fact that we are loved by God, even in our brokenness.

In The Return of the Prodigal Son: a Story of Homecoming, Nouwen develops a chance encounter with Rembrandt’s painting of the same title into a personal spiritual odyssey. Inspired by the painting, he skillfully dissects each section of the powerful gospel drama in the light of his own life journey.

From the back cover: “The themes of homecoming, affirmation and reconciliation will be newly discovered by all who have known loneliness, dejection, jealousy or anger.” The New Oxford Review says, “The Return of the Prodigal Son is a beautiful book, as beautiful in the simple clarity of its wisdom as in the terrible beauty of the transformation to which it calls us.”

Drawing on years of pastoral experience and insight, Nouwen passionately reflects on his own spiritual journey as he became “more and more aware of how long I have played the role of observer.” For years he had tried to get students and parishioners to see the importance of actually living the spiritual life, “but had I, myself, really ever dared to step into the center, kneel down, and let myself be held by a forgiving God?”

As the painting took on a personal resonance, he began to see in it the heart of the story that God wanted to tell him. The Prodigal Son became, for Nouwen, a mysterious window that exposed the kingdom of God in an intimate way. He was now able to see the fallen world through the eyes of God’s redeeming love. This introspection as he pondered Rembrandt’s portrayal eventually led him to living with and ministering to the mentally disabled.

In the prologue, Nouwen relates:

Each little step toward the center seemed like an impossible demand, a demand requiring me to let go one more time from wanting to be in control, to give up one more time the desire to predict life, to die one more time to the fear of not knowing where it all will lead, and to surrender one more time to a love that knows no limits…. I would never be able to live the great commandment to love without allowing myself to be loved without conditions or prerequisites.

Herein lays the essence of the gospel: God is for us! It confronts us with the fact that… “truly accepting love, forgiveness and healing is often much harder than giving it. It is the place beyond earning, deserving and rewarding. It is the place of surrender and complete trust.”

The Return of the Prodigal Son expresses Nouwen’s personal “homecoming” journey that answered his lifelong question of identity. He discovered that he is the one Jesus loves unconditionally. His book carries the hopeful message that God’s healing love for us is always available — all we have to do is receive it — in believing prayer.