Seven-feet-two-inches-tall Richard Kiel is probably best known as the actor who played the horrific “Jaws” character in the James Bond films. But appearances can be deceptive. Off stage, Richard is a gentle giant, a devout Christian and family man, who has used his stardom as an opportunity to do a greater work, including behind the camera. He was co-producer, co-writer and star of the Family Film Award-winning The Giant of Thunder Mountain, which explored the themes of looking beyond physical appearances to the intentions of the heart.

He has also written a landmark biography of the original Cassius Clay. When the name “Cassius Clay” is mentioned, most people think of the three-time world heavyweight champion, Cassius Clay, who changed his name to Muhammad Ali. The renowned boxer was named after his father, who in turn was named for Cassius Marcellus Clay, the 19th-century white abolitionist politician.

In an interview with Al Doshna, Kiel explained why he found the life of the great abolitionist so fascinating.

Al Doshna: How did you first learn about the abolitionist Cassius Clay? 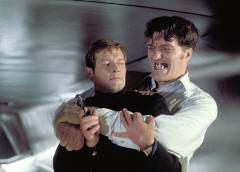 Richard Kiel: My producer friend Arch Hall had started a documentary about Cassius Clay. His sister worked at Berea College, which Clay helped to start. Soon after, Hall died, and I started doing further research.

AD: What was it about Clay that inspired and appealed to you?

RK: Being an actor, I was impressed with the drama contained within Clay’s life. If a producer hired a half dozen writers and told them to come up with a heroic man, and you put all their stories together into one fictional story, it would not compare with the heroic events in the true-life story of Cassius Clay. It was an actor’s dream role because it starts with him as a teenager and ends when he is in his early ’90s, still performing heroic deeds.

AD: You researched the book over a 25-year-period. It would seem that this subject in general is near and dear to your own heart, even apart from the specifics about Clay himself.

RK: My wife Diane is from Georgia and doesn’t have a racist bone in her body. While doing my research I discovered a lot of facts that aren’t well-known, which I found interesting. For example, only about 6 percent of the people in the South owned slaves and the other 94 percent were affected adversely by slavery, because they had to compete with this almost-free labor. White folks south of the Ohio River were “poor white trash” because of having to compete with slavery. If you were a house painter, a cook or a gardener, you couldn’t make money competing with the slave labor that was being used to do the same thing. The same was true of almost every blue-collar job.

Of course, Cassius Clay freed his slaves decades before either the Emancipation Proclamation or the Thirteenth Amendment. He also donated ten prime acres and money to a Reverend John Fee so the pastor could build a home for himself and his family, as well as a church, and finally a
small school, so that the slaves that Cassius had freed, young and old alike, could be educated. This small school blossomed with Clay’s help into the first interracial and non-gender college in America—Berea College in Berea, Kentucky.

Cassius Clay once made the statement, which today could be wrongly turned against him, that “For better or worse the blacks are among us and they must be educated so they can be a part of our governing society.” That was not only a bold statement in those times, but today his vision has become a reality, with our first black president being not only a part of our governing society, but its leader. One must consider Clay’s statement in the context of the time in which it was made to understand why he used the words that he did. 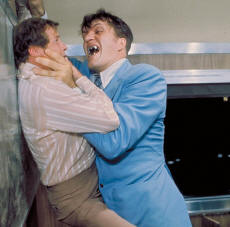 Facts like these are what drew me to the project, along with the fascinating story of the man Cassius Clay himself, who put his life on the line in an era that had little understanding of what he was trying to do.

Of course, his personal story is equally fascinating, with all its elements for a great novel. His life spun out like a soap opera with romance, courtroom drama, affairs, divorce and even murder!

AD: What do you believe was the driving force behind his quest?

RK: His personal and passionate feelings towards his slave friends George and Mary. He loved them and he saw in them the potential to be educated and to be part of our governing society. This is something that very few people of that era knew or understood.

AD: It is strange that a man as active in the events of his time as Clay was, especially involving slavery and the Civil War, is as relatively unknown as he is today. How do you account for that?

RK: For the same reasons that all of these facts I have described have been left out of the history books as they are written today. The story of Schindler in Schindler’s List was also an unknown story until Thomas Keneally took the time to write about it and get it published
in 1982 and Steven Spielberg made it into a movie in 1993. At that rate it will be another 10 years before Cassius Clay will be made into a movie, and I will be almost 80 years old.

AD: Before we conclude, would you tell us a little about your Christian background?

RK: I grew up in a Christian family and attended church and Sunday school during my formative years. I was about 8 or 9 years old when I first made a declaration for Christ during a youth rally at our church. I was among many adults and teenagers passing out tracts at Los Angeles County General Hospital when I was about 10. I re-confirmed my decision for Christ at a youth camp at about age 16 and finally was baptized with full immersion when I was 27.

AD: Thanks for your time and all the best with your book. I hope to see the movie long before you turn 80.

Alan Doshna is a freelance journalist living in California.