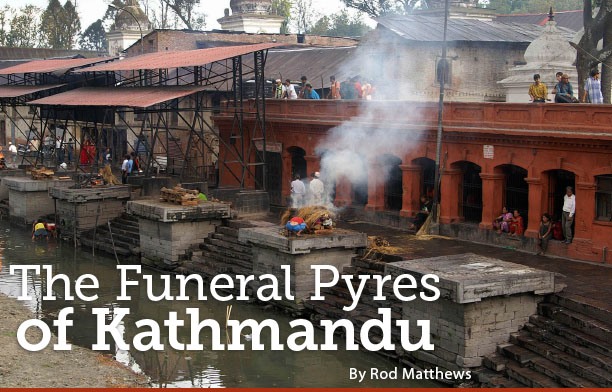 Standing on the edge of the Bagmati River, I could see the funeral pyres lining the opposite bank. The steps from the walkway to the water’s edge were interspersed with concrete platforms, some holding piles of wood awaiting the next cremation, some vacant, and some with the smoke drifting up from the flames consuming the beautifully wrapped but anonymous (to me) persons whose lives had ended. Mourning family members, heads lowered, lingered around each pyre paying their last respects. I wondered what they were thinking. Were they wondering where their beloved had gone as they passed from this life to the unknown one ahead? Were they anxious about whether Shiva would take care of their beloved? Or were they fatalistically resigned that they couldn’t know? As they contemplated the flames, perhaps the very mystery and the thought of risking a future sub-human life-cycle briefly inspired them to work harder in this life in the hope of pleasing their gods.

My visit to the world-heritage-listed Pashupatinath Temple, dedicated to the Hindu god Shiva in Kathmandu, Nepal, left me sobered and sad, with a deep desire to see these people filled with hope and a personal knowledge of the “the God nobody knows,” as the apostle Paul called him when enlightening the Greeks centuries ago (Acts 17:16-34 The Message throughout except as noted). A Hindu devotee’s life is consumed with pleasing gods (and there are thousands of them) who do not clearly explain what is needed to appease him or her sufficiently to warrant a promotion to a better life cycle in the next life. There’s certainly no personal relationship involved. If I had been born a Hindu in Nepal, I could be standing there watching the flames consume the wood and straw and the remains of my loved one, and I would be wondering whether they had done enough to ensure a better life in the next world. For millions there’s no assurance that the future holds anything better than the hardships and deprivation, the arduous labor and rare pleasures of the life just past. All they can have is a weak, personally-generated hope in the face of ignorance and mystery. 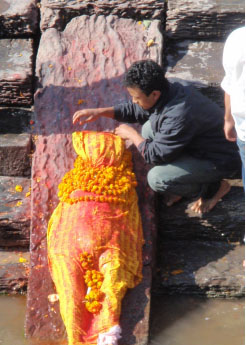 None of these hardy Nepalese people from the foothills, valleys and towering mountains of the Himalayas chose where they were born, or what family name or religion or culture they inherited. Neither did we. I wondered how I came to be born where I was—and who I am. I felt a faint guilt for being able to enjoy a wider spectrum of human experiences and pleasures, of being able to travel to see their world when many of them could hardly afford the journey from their home villages to this temple to say farewell to their loved ones in the manner they felt appropriate. I looked at the debris and rubbish along the river bed, the trickling, dirty water, used many times already for every human need, and yet considered part of a sacred river system into which the devoted bathed and then dipped the feet of the deceased before cremation. I was soberly grateful to be there to have an emotional reminder that there is an end to this life for us all, and for many it is sheer relief from hardship and fear of the unknown.

As I stood there sadly contemplating the mourners across the river who stared at the flames, believing in a life process that cares nothing about them personally, I could only marvel at the compassion and love of another God who left his abode and “moved into the neighborhood” (John 1:14), to embrace as his own our life and hardships, our pain and suffering, our short-lived joys and our discouragements, so as to reveal his all-encompassing love for every person on earth. 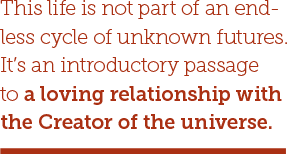 Encompassing the mourners, the priests and the devotees at the Pashupatinath Temple, there is a great personal God, known as Father, whose goal has always been to bring his creation back into a harmonious relationship with him, the Son and the Holy Spirit. Through history he’s made it known that he was not willing that any should perish (2 Peter 3:9 KJV). As an expression of this total love for us, Jesus Christ, the Creator, entered our world as a human being—was born and lived as one of us, died as we do, then conquered death by rising from the grave and then ascended back to the Father taking with him our humanity in a glorified form. That is why Paul could write that we already “sit with him in the heavenly places” (Ephesians 2:6), if we choose to go where he goes. It’s the completion of the reconciliation process. It’s the complete revelation of a God who loves and cares and works with personal focus and consummate respect for each individual to bring them back from ignorance, fear, mystery and hopelessness to the secure embrace of an eternal family.

The message is universal, regardless of where we were born and what we might believe now. This life is not part of an endless cycle of unknown futures. It’s an introductory passage to a relationship with the Creator of the universe—each in his own time, with an individually tailored journey.

The Pashupatinath mourners are guaranteed a great day ahead when they will come to know they have nothing to fear, no endless life cycles, no ill-defined path in the hope of a better life in the next world. They will learn that their own Creator has done all that is necessary to rescue them and everyone else from this hopelessness and mystery. And while he remains forever our Savior, he does invite us to walk alongside him, personally expressing towards all people his love, compassion, patience and respect, in the process of drawing all people into the family relationship that has eternally existed between the Father, Son and Holy Spirit. This is our wonderful salvation.