About 1900 years ago, religious zealots living in an isolated desert community near the Dead Sea sealed some of their sacred writings in clay jars and hid them in isolated caves in the cliffs. These writings remained undisturbed until 194 7, when a Bedouin shepherd boy rediscovered them. It was the most exciting archeological find of the 20th century.

The Dead Sea Scrolls is the name conventionally given to a group of scrolls mainly found in 11 caves near the site of Qumran, but with a few also found at other sites near the Dead Sea, such as Masada, Nachal Hever, and Murabba‘at. These scrolls were written on animal hide or papyrus and contained three types of material: copies of the Hebrew Scriptures, works from what scholars call “apocrypha” or “pseudepigrapha,” and documents pertaining to the Qumran community itself.

Contrary to the cries of a few sensationalists, the Dead Sea Scrolls are not revolutionary or damaging to the claims of traditional Christianity or Judaism. Rather, they strengthen our trust
in the validity of the Hebrew Scriptures common to Jews and Christians, further our understanding of early Judaism, and deepen our background knowledge of the New Testament. In this article, we examine five ways the scrolls have contributed to our understanding.

1. Established the accuracy of the Old Testament text

One paper I worked on as a doctoral student compared the numerous scrolls in cave 4 of Qumran containing parts of Deuteronomy to the text of Deuteronomy found in Codex Leningradensis.
This codex, dated a.d. 1009, is the oldest surviving complete Hebrew Bible. I found that several scrolls from Qumran dating between 125 and 25 b.c. differed at the letter level from Codex Leningradensis by 1 to 4 percent, and most of these changes were only spelling differences. Moreover, one manuscript, 4QDeutg, the seventh Deuteronomy manuscript found at Qumran, was letter for letter identical with Codex Leningradensis.

My findings only confirmed what other scholars had shown. The Dead Sea Scrolls had established the antiquity of the Masoretic Text, the tradition of the Hebrew manuscripts painstakingly copied by the Masoretes for centuries. This text underlies the printed Hebrew Bibles used by Jews today and most modern translations used by Catholics and Protestants. In addition to several Deuteronomy scrolls, other Dead Sea Scrolls of Isaiah, Jeremiah, and the Minor Prophets attest to the antiquity of the Masoretic Text. We now have documents with the same basic text as used in our Bibles that are over 1,000 years earlier than any previously known.

“The scrolls provide evidence that information handed down in the books of the Bible is accurate.”

Almost everything we find in the hundreds of biblical Dead Sea Scrolls is contained in the Masoretic Text, or the somewhat different Septuagint Greek text, or the Samaritan Pentateuch. The biggest exceptions are a mere two verses worth of material in 1 Samuel previously known only in Josephus, and a verse in Psalm 145 that also occurred in a couple of medieval manuscripts. We can have confidence, then, that very little has been lost or altered in the last 2,000 years of transmission of the biblical manuscripts.

2. Enhanced our knowledge of Hebrew and Aramaic

Like the Old Testament, most of the Dead Sea Scrolls are written in Hebrew, but some are written in Aramaic. The scrolls give us a better understanding of Middle Aramaic, the period between the Aramaic found in Ezra and Daniel, and that of the classical Targums — the Aramaic
translations of Scripture dating to a.d. 400 or later. The scrolls are an even more important source in understanding the Hebrew language from the fourth century b.c. to the second century
a.d. The Dead Sea Scrolls were discovered about the same time as the founding of the modern state of Israel, the only state that has Hebrew as its official language, and the discovery was one factor in helping the fledgling state form a Hebrew identity in continuity with its past traditions.

Helped our understanding of the background to the New Testament

The Dead Sea Scrolls were written before the New Testament existed and do not mention Jesus or the apostles. However, they frequently provide background information that illuminates our understanding of the New Testament.

For example, in Luke 7, John the Baptist asks Jesus if he really is the Messiah. Jesus replied: “Go back and report to John what you have seen and heard: The blind receive sight, the lame walk, those who have leprosy are cured, the deaf hear, the dead are raised, and the good news is preached to the poor” (Luke 7:22). Until the discovery of the Dead Sea Scrolls, the connection between this list Jesus mentioned and what was expected of the Messiah was unclear. However, 4QMessianicApocalypse specifically lists healing the wounded, opening the eyes of the blind, raising the dead and preaching good news to the poor as the things that the Messiah would accomplish. This, then, is proof that Jesus claimed to be the Messiah — contrary to the opinion of many New Testament scholars before the Dead Sea Scrolls were found.

The scrolls also provide background to the book of Revelation. Like the early church, the Qumran community was a marginalized Jewish group who looked forward with hope to God’s end-time judgment upon the world. In the New Testament, this is particularly expressed in the book of Revelation, an apocalyptic work. The Dead Sea Scrolls also contain apocalyptic works such as Aramaic Levi, five Enochic apocalypses, The Vision of Amram, Jubilees, Apocryphon of Daniel, and The Four Kingdoms. These apocalyptic works, in addition to other scrolls with thematic connections to Revelation, such as the War Scroll and the New Jerusalem Texts, vastly increase our background knowledge to the last book of the Bible.

4. Increased our knowledge of early Judaism

Until 60 years ago, our main sources for first-century Judaism were the New Testament and Josephus. But the Dead Sea Scrolls provide scores of documents describing the practices and
theology of the Qumran community, a group that existed between approximately 100 b.c. and
a.d. 70. According to almost all scholars, this community belonged to the Essenes, a Jewish sect briefly mentioned by the historians Josephus and Pliny the Elder. The scrolls, therefore, give us much information about the Essenes but also additional knowledge about other groups that the Essenes reacted to or interacted with, such as the Pharisees and Sadducees mentioned in the New Testament. For example, five documents among the scrolls label the Pharisees as “those who look for smooth things” (they were less strict in certain ways than the Essenes) and accuse them of misinterpreting the law.

5. Established the antiquity of the Apocrypha and Pseudepigrapha

The Old Testament typically found in Protestant Bibles contains the same books, although in a different order, as the books of the Hebrew Bible used by the Jews. Catholics, Eastern Orthodox churches and Oriental Orthodox churches have additional books in their Old Testaments, and scholars call these additional books deuterocanonical, apocrypha or pseudepigrapha. Prior to the discovery of the Dead Sea Scrolls, these works were almost entirely known only in Greek, Latin or other translations.

“Today there is much fanciful speculation about the origins of Christianity. The scrolls show the information we have can be trusted.”

The Dead Sea Scrolls contained Hebrew or Aramaic copies of the following apocryphal books: Tobit, Ben Sira (or Ecclesiasticus), the letter of Jeremiah, Jubilees and 1 Enoch. The first three of these are in Catholic and Orthodox Bibles; the last two are in the Ethiopic
Orthodox Bible.

In most of our Bibles, there are 150 psalms, but in the Septuagint (the ancient Greek version of the Jewish Scriptures), there is a psalm 151, which has the following superscription: “This
psalm is ascribed to David as his own composition (though it is outside the number), after he had fought with Goliath.” The psalm speaks about David being small amongst his older brothers, about him tending sheep, being anointed by God and defeating Goliath. In Qumran, the same psalm was found in Hebrew but with a simpler superscription: “A Hallelujah of David the Son of Jesse.”

The same scroll that contained this psalm, 11QPsa, contained two other Hebrew psalms previously preserved only in Syriac by the Syriac Orthodox Church, and three completely unknown psalms. As a side note, I had the privilege to study the Dead Sea Scrolls under James Sanders, the scholar who unrolled 11QPsa and produced the critical edition of it.

As a Protestant, I normally use the Protestant Old Testament, those Hebrew writings that the Jews decided were Scripture. I recognize, however, that the additional Old Testament material
preserved by the Catholic, Greek Orthodox, Syriac Orthodox and Ethiopic Orthodox churches, etc. is of great antiquity, and that much of it was originally written in Hebrew or Aramaic. Whether one calls these works deuterocanonical, apocryphal or pseudepigraphal, the Dead Sea Scrolls have shown that there is much to value here.

We live in a time when there is much speculation about the origins of Christianity. Much of it is fanciful, useful only to provide grist for the fiction writer’s mill. But some people find
it disturbing, and wonder if we have been told the whole story. Because it took several decades before all the scrolls were published, some people speculated that truth damaging to the claims of traditional Christianity was being suppressed. Now that all the scrolls are published, we can see that the opposite is the case. They provide evidence that the information contained in the books of the Bible has been handed down accurately, and can be trusted.

Timothy D. Finlay earned his Ph.D. at Claremont, where the Ancient Biblical Manuscript Center housed, with the agreement of Israel, a complete set of photographs of the Dead Sea Scrolls before they entered the public domain. He first saw the scrolls themselves in Israel in 1997, and throughout this autumn is leading groups of students to see the several important scrolls, including 11QPsa and 4QMessianicApocalypse, on exhibition in San Diego. He is Associate Professor of Biblical Studies at Azusa Pacific University and is working on a book on the literary genres of the Old Testament. 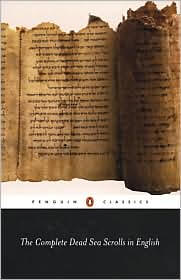 The Meaning of the Dead Sea Scrolls: Their Significance For Understanding the Bible,
Judaism, Jesus, and Christianity, James VanderKam and Peter Flint (Harper-Collins, 2002)