The church that kept the faith 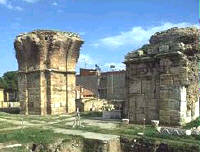 Up to this point, phrases from the vision of chapter 1 were used to identify the speaker. Apparently, there was no suitable expression to introduce an important point for the Philadelphians. The letter to the church in Philadelphia begins with Christ identifying himself as “holy and true” (3:7). The Holy One is a common Old Testament title for God (Isaiah 40:25; 43:15). He is also true in the sense that he is faithful and trustworthy. God can always be counted on to keep his promises (Titus 1:2).

The key of David

Christians of the first century lived in an uneasy relationship with Judaism. Most Jewish Christians probably attended the synagogue, took part in ritual worship and used the Hebrew Scriptures as their Bible. Then on the first day of the week they met with those who believed in Jesus as the Messiah.

At the same time, the church considered itself the rightful spiritual heir of Judaism — the new Israel (Galatians 6:16). It had accepted Jesus as its Lord, the Messiah spoken of in the Hebrew Scriptures. The church saw itself as composed of spiritual Jews who had received “circumcision” through the Holy Spirit (Romans 2:28-29). This naturally caused a rift between Christians and Jews, as they both claimed to be God’s people.

That meant Jewish Christians often endured exceptional pressure and stress. They were called apostate Jews by their own relatives. Non-Christian Jews accused Christians of being usurpers. They insisted that Jews and not Christians had the open door to God’s presence and the keys to the kingdom.

The Christians in the Asian city of Philadelphia were among those who took the brunt of these claims. Then, in about A.D. 96, John, in the book of Revelation, assured those in the church that they were, indeed, the heirs to salvation (Revelation 3:7-13).

John wrote that Christ is the One “who holds the key of David. What he opens no one can shut, and what he shuts no one can open” (verse 7). Christ had set an open door before the church that “no one can shut.”

What was this key that unlocked a door that could not be shut? The answer lies in analyzing the key and door metaphor, which is found in the writings of the prophet Isaiah. He referred to an individual of his time named Shebna who had charge of the palace of the Judean king. Today, we might call him the chief of staff.

The prophet Isaiah said the Lord would replace Shebna with a man named Eliakim. The Lord would “place on his shoulder the key to the house of David; what he opens no one can shut, and what he shuts no one can open” (Isaiah 22:22). Thus, Eliakim would be a kind of gatekeeper with power to control entry into the royal kingdom. As the king’s steward, he would decide who could or could not have access to the king.

This story in Isaiah serves as a prophecy of the Davidic Messiah. “The imagery suggests that Christ is the only one who can grant access to God,” writes Norman Perrin. Christ “has given the Christians at Philadelphia access to God and no one can deprive them of it” (Jesus and the Language of the Kingdom, p. 86).

In the book of Revelation, John used this Old Testament metaphor to get across a vital message to the church in Philadelphia, and thereby to all Christians. That is, Christ has the key of David. He opens the door for the church — his royal household — and allows it to come into the presence of God. In short, Christ has granted Christians access to God. No one can deprive them of that access, which means that God gives them salvation.

The key in Revelation does much more than open the way to talking with a national king. In Christ’s hand, the key opens the door into the presence of God, his kingdom and eternal life. Not only does Christ open the door, he is the door to the kingdom (John 10:7, 9). Thus, it is Jesus who presents himself to the church as the way to salvation (John 14:6).

A second interpretation of the open door and key statements is that the open door set before the church was a wide-open opportunity to engage in evangelistic activity and preach the gospel. Paul used a similar metaphor in this manner (1 Corinthians 16:9; 2 Corinthians 2:12; Colossians 4:3).

However, Revelation usually uses imagery from the Old Testament, and the Old Testament background of the key and door metaphor works against this idea. The prophet Isaiah was speaking of access to the king, not evangelism to the world. The concept of access is also more in keeping with the context of Revelation. There is no evidence to support the interpretation of these passages as the church’s missionary activity.

The book of Revelation has a different purpose — that of providing much-needed encouragement and comfort during trying circumstances. It presents the church not as a soul-conquering body but as an organism fighting for its very life in a hostile world. That’s because the church was being intimidated by those who “claim to be Jews though they are not” (3:9). George Eldon Ladd explains the situation:

“The immediate background of the phrase was the claim of the Jews in Philadelphia that they were the true people of God who held the key to the Kingdom of God. John contradicts this claim by asserting that the key to the kingdom which had belonged to Israel really belongs to Jesus as the Davidic messiah (5:5; 22:16) and had been forfeited by Israel because she had rejected her Messiah” (A Commentary on the Revelation of John, p. 59).

These Jews will ultimately have to acknowledge that Christ loves the church. They will recognize that the church is composed of the true people of God, rather than the Jews as a nation. The Christians at Philadelphia would have been greatly encouraged when Christ identified himself as the true Messiah, and as one who controls access to the eternal kingdom. When he opens the door “no one can shut” it – and no one can prevent entry to the people for whom he opens it (3:7).

The local Jewish community of Philadelphia may claim that the kingdom belongs to the Jewish community. But they “are liars” (3:9). Christ has used the key of David to set an open door before the church, not the synagogue. The door to the synagogue may be closed to the Christian; the door to Christ’s heavenly kingdom is wide open.

But even as the church is persecuted — and its members martyred — it should remember the promises of its leader, Jesus Christ. He alone holds the key to God’s presence and has opened the door to his kingdom and the church’s salvation.

The Jews of Philadelphia who were persecuting and intimidating the Christians are called a “synagogue of Satan” (3:9), as they were identified in the letter to the church in Smyrna (2:9). They will experience a reversal of fortune – be forced to acknowledge that the church constitutes the true people of God (3:9).

The background for verse 9 is also to be found in the Old Testament, but with an unexpected twist. Isaiah had pictured the victory of Israel over its enemies (60:14). In one place Isaiah said gentile nations would do homage to Israel at the start of the kingdom. “They will bow down before you and plead with you, saying, ‘Surely God is with you…’” (Isaiah 45:14).

The imagery of Isaiah bears a striking similarity to Revelation 3:9. But a stunning reversal of fortune has occurred. What the Jews hoped to gain from the gentiles, they themselves must render to the Christians. The Jews in Philadelphia must play the part of the heathen and concede that the church contains the people of God.

Revelation here underscores the notion that the Jews are no longer the people of God as a national or ethnic entity, since they have rejected their Messiah (Matthew 21:33-43, especially verse 43). The new Israel – the church – has taken their place as God has moved forward to fulfill his promise of grace. The church is the true “Israel of God” even though it is largely composed of Gentiles (Galatians 6:16).

Revelation 3:9, however, looks to the time when the Jews will finally acknowledge (thus, “bow down” to) their Savior and the largely gentile church as the people of God. In that time, “All Israel [that is, the Israelite people as a whole] will be saved” (Romans 11:26).

Because the church in Philadelphia has kept faith with Jesus, he will keep them from “the hour of trial that is going to come upon the whole world to test those who live on the earth” (3:10). This expression “hour of trial” refers in Revelation to the affliction on the world to come before God’s kingdom is established on the earth. This period of worldwide ordeal is a main theme of Revelation. The book informs the reader that “the hour of his judgment has come” (14:7). The death of the world system, dubbed “Babylon the Great,” which stands in opposition to God, is described in dramatic symbolic language in Revelation 15-19. The doom of this Babylon comes “in one hour” (18:10). “In one hour” the world’s Babylonish “great wealth” is “brought to ruin” (18:17, 19).

When the world’s anti-God system collapses, the church will face terrible persecution and martyrdom. That’s because it will be called on as a faithful witness to the rule and authority of God in a godless world. But because the names of the faithful witnesses are written in the book of life, they will be delivered and saved for eternal life.

Whatever the Spirit says to an individual church such as Philadelphia applies to all the churches (3:13). Thus, it can be understood that the promise of protection applies to the church universal. Various images or metaphors are used in Revelation to describe the protection the church receives during this worldwide trouble. The earth is not harmed until the saints are sealed (7:1-8). The individual worshipers are counted, a sign of God’s caring protection on those he personally knows (11:1). The woman, a symbol for the church, is protected in the wilderness (12:14-16).

As we saw earlier, the church at Smyrna was told it would receive “the crown of life” (2:10). Philadelphia was also told not to let any person take its crown. In both cases, the word is stephanos – which refers to the wreath of victory awarded to winners of athletic contests. This would have been a meaningful word to the church in Philadelphia, as the city was famous for its athletic games. 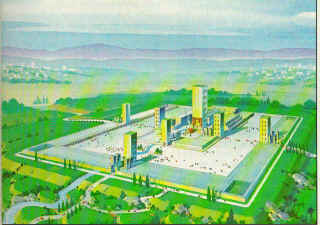 Christ promised the faithful in Philadelphia that he would make them pillars in God’s temple (3:12). And, they would never again leave his presence. This is another symbol of assurance that the members would gain eternal admission into the kingdom of God.

Christ also promised to write three names on the believer – the name of God, the name of the New Jerusalem, and Christ’s new name (3:12). Ancient pillars had the names of people they honored inscribed on them. The metaphor means to say that God will honor and bless his people. But in what way?

First, the believer will have God’s name. In the Old Testament, the Lord told the priests to pronounce specific blessings on Israel, which concluded with this thought: “So they will put my name on the Israelites, and I will bless them” (Numbers 6:27).

Second, to be named with the city of God – the New Jerusalem – is a symbolic way of saying that the believer has citizenship in God’s spiritual commonwealth (Galatians 4:26; Philippians 3:20; Hebrews 12:22).

Third, the believer is to have Christ’s own new name. Perhaps this refers to a future full revelation of Christ himself, which cannot be grasped until the believer is glorified (1 John 3:2).