“Eleven o’clock Sunday morning is the most segregated hour, and Sunday school is still the most segregated school of the week,” is an oft-quoted statement from Martin Luther King Jr. (1929- 1968). King was referring to the fact that during his lifetime most African-Americans worshiped in congregations and churches mainly or entirely composed of black people.

These African-American churches’ roots go back to the North and South of the Revolutionary War period of the 1760s and 1770s. Like whites, blacks also began to come to Christ during the religious revivalism of the period.

African-Americans shared a common belief with European-American evangelicals that the biblical account of God’s past dealings with the world offered clues to the meaning of life in America. But, there was a difference. White Protestants often likened America to the Promised Land — the New Israel — a “city set on a hill.” Black worshipers were more likely to see America as Egypt — as the land of their captivity. They longed for their own emancipation, just as God had delivered ancient Israel in the Exodus.

This desire for emancipation eventually led to the African-American church movement. Blacks in the Methodist church took the lead in creating independent denominations.

In the Revolutionary period, the impetus for blacks to have their own churches owes much to the work of Richard Allen. He was a former slave and deacon-elder at the integrated St. George’s Methodist Church in Philadelphia. 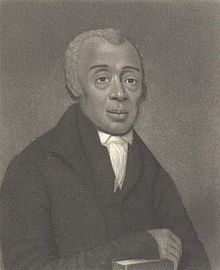 In 1787, Allen with Absalom Jones organized the Free African Society in Philadelphia. Allen founded the all-black Mother Bethel African Methodist Episcopal Church in 1791, after Jones and he left St. George’s over its segregationist practice of relegating black members to the church balcony during worship services.

Over time, growing numbers of African-Americans formed their own congregations. In 1816, representatives of these congregations joined to form the African Methodist Episcopal Church (A.M.E. church), with Allen as the first bishop. The most significant growth of this church occurred during the Civil War and Reconstruction.

African-American churches took up what has been their historical mission to care for the spiritual and physical needs of black people, since they were neglected and discriminated against by white society. Yet, they did not forget the ultimate mission of the church — to make disciples in all nations and among all peoples. The A.M.E. church sees its mission in this way: “To minister to the spiritual, intellectual, physical, emotional and environmental needs of all people by spreading Christ’s liberating gospel through word and deed…that is, to seek out and save the lost, and serve the needy.”

African-American churches have been a bulwark in the black community — a refuge from the larger, cruel world. Richard Wright, in his book 12 Million Black Voices, wrote: “It is only when we are within the walls of our churches that we are wholly ourselves, that we keep alive a sense of our personalities in relation to the total world in which we live.”

The black church was also a sanctuary for praise and worship of Christ. Here members could express themselves freely and unite culturally in their beliefs and life practices. As worshipful communities, African-American Christians saw their relationship with Jesus as the bedrock of a faith that gave them hope for a better future.

By the late 1950s, a generation of African-Americans began to drift away from the church. The relevance of the church was dealt a serious blow, as many urban youths felt it no longer had anything to offer — that it did not speak to the reality of their lives.

However, the African-American church continues to be for many black people the place of worship and source of strength, though it is much more diverse than it once was.

The Sunday service may still be a time when people of different racial backgrounds to some degree are segregated, as Martin Luther King Jr. observed. However, today even most exclusively black churches have made connections to the larger Christian community and serve black people as well as people of all races in ministry and the gospel of Christ.