About 30 years after the death and resurrection of Jesus Christ, it seems that a wealthy man named Theophilus became interested in Christ and Christianity. We presume that Theophilus believed in Jesus, but some of the stories he heard about him seemed too strange to be true. So he asked an investigator to get the facts about what Jesus had really done and taught. This special investigator learned as much as he could about Jesus’ life, work and teachings. He then wrote a documentary about Jesus Christ. We still have it today. It is the Gospel of Luke. 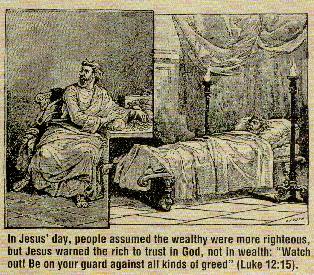 Luke tells us how he went about his task: “I made a careful study of everything and then decided to write and tell you exactly what took place. Honorable Theophilus, I have done this to let you know if what you have heard is true” (Luke 1:3-4, Contemporary English Version throughout).

In addition to being inspired by God to write this Gospel, it’s clear that Luke did his research, probably traveling to Judea and interviewing Christians who had known Jesus. Luke learned that Jesus took special interest in the less-respected members of society.

Luke’s writing style suggests that he had an upper-middle-class education. Paul calls him a physician. Theophilus, judging by the title “Honorable,” may have been a wealthy government official. The name Theophilus means “lover of God,” so anyone who loved God would feel welcome to read Luke’s report. Luke wanted Theophilus to know about Jesus’ interest in disadvantaged people. Like Luke, Theophilus would be surprised and intrigued at how Jesus regarded poor people, for example.

But Luke showed that Jesus went out of his way to remind everyone that he had a message for the poor: “The Lord’s Spirit has come to me, because he has chosen me to tell the good news to the poor” (Luke 4:18).

On another occasion, “Jesus looked at his disciples and said: God will bless you people who are poor” (Luke 6:20). What would a wealthy man think of that?

A wealthy man could be disturbed by such words. But he would see near the end of the report that God can save even a rich man. The cost? A complete change in his attitude toward money.

Luke had heard about, perhaps even interviewed, a wealthy tax collector named Zacchaeus, who told Jesus he would give half his money to the poor. Jesus was pleased. “Today you and your family have been saved, because you are a true son of Abraham” (Luke 19:9).

To illustrate this, Luke included several stories about women in his report. He began with Elizabeth, the mother of John the Baptist, and Mary the mother of Jesus. Anyone who thought women were inferior would have been surprised. In Luke’s report, the first person on whom the Holy Spirit came was Elizabeth (Luke 1:41). The first to be called “blessed” was Mary (verses 28, 42).

And in a more personal touch, Luke described Mary’s worry when she thought her young son was lost in Jerusalem (Luke 2:48). She “kept on thinking about all that had happened” (verse 51).

In his research, Luke found that women helped pay the cost of Jesus’ ministry: “Joanna, Susanna, and many others had also used what they owned to help Jesus and his disciples” (Luke 8:3). Joanna, he noted, was the wife of a government official. Luke knew that Theophilus (who may have been a government official himself) would be interested.

Another story Luke reported was about Jesus teaching in the home of Martha. Martha was busy with housework, but her sister Mary was listening to Jesus. Martha complained to Jesus: “Doesn’t it bother you that my sister has left me to do all the work by myself?” (Luke 10:40). But Jesus reminded her that Mary had chosen to do the more important thing (verses 41-42). The teachings of Jesus were important for women as well as for men. (For more about Luke’s interest in women, see companion article below.)

Jesus began his ministry by reminding everyone that, God’s prophets had served people of other nations (Luke 4:25-27). This made the Jews so angry that they tried to kill Jesus (verses 28-30).

Jesus’ attitude toward other ethnic groups was also shown in the parable of the good Samaritan (Luke 10:30-37). Jews despised Samaritans, but Jesus dared to use one as a good example. Jesus broke through social barriers and practiced religious equality.

But Jesus preached to the crowds, and they loved him for it (Luke 5:15). He gave them the good news that God would not neglect them, that they were valuable to him. He said: “I didn’t come to invite good people to turn to God. I came to invite sinners” (verse 32).

Luke learned that Jesus spent time with all classes of people. He attended banquets with tax-collectors (who were assumed to be cheats and traitors). But the religious leaders criticized Jesus for the company he kept. “Jesus eats and drinks too much!” they said. “He is even a friend of tax collectors and sinners” (Luke 7:34).

Luke described an incident that occurred when Jesus was dining at the home of one of his critics: “When a sinful woman in that town found out that Jesus was there, she bought an expensive bottle of perfume. Then she came and stood behind Jesus. She cried and started washing his feet with her tears and drying them with her hair. The woman kissed his feet and poured the perfume on them” (verses 37-38).

This must have astonished everyone who saw it. A Jewish teacher allowing himself to be touched by a woman? And not just any woman, but a woman everyone knew to be “sinful”! And not just touched, but anointed with expensive perfume and caressed with a woman’s hair, which was normally kept hidden. Scandalous!

But Jesus understood the deep emotion that had prompted her act of adoration. “All her sins are forgiven, and that is why she has shown great love. But anyone who has been forgiven only a little will show only a little love,” he told his self-righteous host (verse 47). Jesus then told the woman, “Your sins are forgiven…. You are now saved” (verses 48, 50).

Hope for the humble

Luke showed Theophilus how Jesus reached out to those less respected in first-century Jewish society. Jesus loved everyone, regardless of their station in life. Even his enemies knew it: “You treat everyone with the same respect, no matter who they are” (Luke 20:21).

Anyone can be blessed by God no matter how lowly he or she may seem to be. As Jesus said, “The people who are really blessed are the ones who hear and obey God’s message!” (Luke 11:28). To emphasize this, Luke used the terms repentance, forgiveness and salvation more often than other Gospel writers did. His report encouraged sinners to turn to God, knowing they would be accepted by him.

Luke recorded the story Jesus told to “some people who thought they were better than others and who looked down on everyone else.” Two men were praying, Jesus said. The Pharisee prayed, “I am really glad that I am not like that tax collector over there.” The tax collector, on the other hand, “was so sorry for what he had done that he pounded his chest and prayed, “God, have pity on me! I am such a sinner.'”

Jesus then said, “It was the tax collector and not the Pharisee who was pleasing to God. If you put yourself above others, you will be put down. But if you humble yourself, you will be honored” (Luke 18:9-14).

Time after time, Luke showed that God wants all people, no matter what their social or religious status, to come to him in repentance and humility. And he will joyfully accept every sinner who turns to him (Luke 15:7, 10).

What a message! God loves rich and poor, saint and sinner, women as well as men. It had seemed too good to be true. But it was true, and is true. Luke had checked it carefully, and sent the good news to Theophilus — and to us today.

See also the companion article, “The Prominence of Women in the Gospel of Luke”