I don’t usually like to lead you up the garden path, but I wonder if you could join me on mine for a moment. I want to show you a slug. 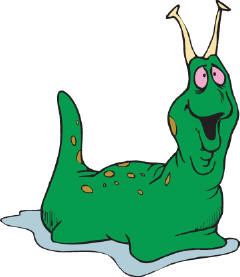 This is a particularly impressive slug. It is about four and a half inches long, and has a lustrous silvery sheen—well, to be strictly honest, perhaps it is more of a slimy gray—but it does have a bright royal purple panel on each side. I have seen it several times as it slides across from the lawn to flower bed, where it apparently hangs out during the day.

It is steadily chewing its way through our flowers, but I haven’t the heart to reach for the slug pellets. I have become rather fond of this slug, and I have the distinct impression that I have seen it before. I seem to remember it crossed my path last year. But do slugs live that long?

A few minutes of research on the Internet showed me that they did. In fact, I learned that a slug can live up to six years—given favorable circumstances, like not being eaten, trodden on or eating a slug pellet. I wanted to know more. (If you stay with this article, you’ll find out why, I promise.)

I bet you don’t know much about slugs. For example, did you know they are not insects? They are molluscs, like clams and squid, and are distantly related to the octopus, but it is pretty distant. Octopi are considered to be quite intelligent; some people think they may be an intellectual match for animals such as rabbits. Slugs certainly are not. They probably do not have any measurable intelligence at all. But they make up for that in numbers.

Someone has calculated that there are as many as 26,800 species of slug. Most of them live on dead or decaying organic matter and even fungi. There are only a few species that feed on live plants—unfortunately those are the kind we have in our gardens. Biologists call slugs gastropods because they, like Napoleon’s army, march on their stomachs. Also, like Napoleon’s army, they don’t do well in cold weather, surviving by burying themselves in the ground wrapped in a cocoon of their own slime.

It has been estimated that there may be 250,000 slugs—weighing perhaps 70 pounds collectively—per acre of farmland.

Since becoming slug conscious, I have begun noticing them on my travels. The biggest I have seen were in Sweden—massive black slugs, maybe six inches long, although I understand the biggest in the world are twice that size!

When in Holland I had the opportunity to find out how fast they can travel. I met a four-inch Dutch slug, engaged on a suicide mission across a cycle-path. It did not seem to be phased by the people flashing by. How fast was it going? I decided to time it. (I know, I know—I need to get a life.) I laid my mobile phone next to it to see how long it would take to travel its length.

Almost immediately the phone, set on loud ring/vibrate went off. I would have thought this would have the same effect on the slug as a stun grenade would have had on me at close quarters, but it didn’t miss a beat. It took just under two minutes to travel the six-inch length of the phone. That works out at about 15 feet an hour, doesn’t it?

What else can I tell you about slugs? (I am assuming you are still reading this, and probably wondering why. I really will get to the point, soon, honest!) Well, they have as many as 27,000 backward slanting teeth, which act with a rasping movement, like a shark’s. They also have a guillotine-like jaw, similar to that of an alligator. No wonder they play havoc with plants. They can eat several times their body weight in a night. They have eyes on the tips of their tentacles, and some species may also have infrared sensors, which allow them to detect food, if not mobile phones. Oh yes, and they like beer.

This really isn’t very interesting, is it? But I am afraid slugs just aren’t. I suppose I could liven things up by telling you about their sex life. Apparently they start out as males, spend their breeding life as hermaphrodites, and then become female in old age. They have a most elaborate mating ritual—although exactly why they need one isn’t clear. Some species climb trees in pairs and hang from the branches by strands of their own saliva. I’d better leave it there. What happens next might offend some sensitive readers!

So why am I wasting your time with this? Slugs really are some of the more boring, and even disgusting of God’s creatures, aren’t they? But watching that slug make its laborious progress across my garden path, and realizing it might have been doing that for six years, reminded me of something the great Christian writer, C.S. Lewis, wrote in Mere Christianity. In a discussion about what it meant for Jesus to come and live on earth as a human being, he wrote:

“The Eternal being who knows everything and who created the whole universe, became not only a man, but (before that) a baby, and before that a fetus inside a woman’s body. If you want to get the hang of it, think how you would like to become a slug or a crab.”

Have you ever thought of it like that? In December of each year, we remind ourselves of the birth of our Lord and Savior. Although common sense tells us it probably wasn’t really like that, we have a romantic impression of the Nativity scene in the stable. There is the calm mother with her beautiful baby boy: “The cattle are lowing, the baby awakes. But little Lord Jesus no crying he makes.” 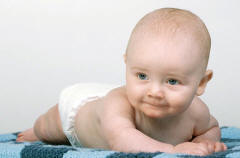 I don’t know how aware of his circumstances the baby Jesus was, but if in some way he was able to understand his situation, I bet he would have felt like crying. Think about it. Not so long ago he had been God, the Lord of Creation. Now he was a helpless baby, unable to talk, to stand or even control his bodily functions.

He who had possessed all power was dependent on his mother for everything. He got cold. He got hungry. He got colic, and had to be burped. His glorious, divine existence had been exchanged for the comparative squalor of life as a human being.

Whereas once he could roam the universe, unencumbered by the limitations of time and space, now he was wrapped in swaddling clothes, unable to move. He could get tired, dirty and discouraged. He would have to learn to crawl, to talk and feed himself.

I don’t know if there was an ancient equivalent of the nursery rhyme that goes: “What are little boys made of. Slugs and snails and puppy dog’s tails….” But if Mary had ever sung it, I think Jesus would have muttered a rueful “Amen.”

Those 30 or so years during which Jesus slugged it out in our world must have seemed like a long time. No wonder he prayed to the Father as he faced the end of his physical life with the unspeakable torture of crucifixion, “Glorify me in your presence with the glory I had with you before the world began” (John 17:5).

Watching that slug and remembering C.S. Lewis’ words gave me a new appreciation for Jesus and the sacrifice he made. I would not want to change places with a slug for one minute, let alone half a lifetime. But that is, in effect, what Jesus Christ was willing to do in order to become our savior.

“I have come that they may have life, and have it to the full,” he said in John 10:10. He knew what life could be like, and he wanted to share it with us—not what we call life, squashed into a few decades, constrained by time and space and trapped in a decaying physical shell.

Real life is so much more than that. It is everlasting, indestructible, freed from all the weaknesses of mind and character. It is greater than anything we can really grasp, because: “Eye has not seen, nor ear heard, nor have entered into the heart of man the things which God has prepared for those who love him” (1 Corinthians 2:9).

We cannot fully grasp it, any more than that slug on the path can understand what my existence is like. So this isn’t really about slugs. It is about Jesus—who became one of us for a while so that we could be with him forever.