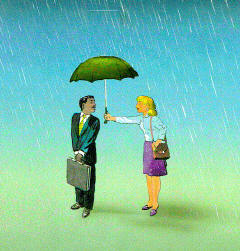 “Everyone knows the Bible is filled with contradictions,” I asserted, smugly assuming that I had scored a point in the debate my friend and I were having. The conversation had begun innocently enough. We were members of a high school debate team, and we were at a tournament miles from our hometown. The debates were finished, and we were just killing time, waiting for the results to be announced.

At first our conversation was casual, but it became more intense when one of his offhand remarks made me realize for the first time that he was a Christian. I had always assumed Christians were ignorant and uneducated. Until now. This friend was not ignorant. On the contrary, he was very intelligent.

I was intrigued by the idea that he had firm religious convictions, so I began to ask him questions. At first my questions were based on a desire to trip him up. But gradually, as my friend provided answers that made sense, my questions came out of a hunger I had never acknowledged. The real turning point in our debate was my assertion that the Bible contradicts itself. His answer stunned me.

That one word hit me with the force of a freight train. He had not argued with me. He simply asked a question I could not answer because I had not read the Bible for myself. I felt ignorant and exposed. For someone who had always looked at Christians as ignorant, I was forced to see that I was the one who was ignorant of what the Bible really contained. Even nonbelievers admit that the Bible has been a vital force shaping Western civilization, but I had never examined this cornerstone of our culture.

More than two years passed before my friend ever knew the effect that conversation had on me. At the time, he thought I simply walked away from what I had heard. He did not know our discussion was never far from my thoughts until I finally acted on what I knew.

The results of such experiences are often not seen right away. Many Christians therefore see evangelism as a rarely successful chore. It is difficult to be motivated, if you cannot see any results.

Evangelism is the duty of all Christians. The great commission at the end of Matthew’s Gospel is a commission for all who follow Jesus Christ: “Therefore go and make disciples of all nations, baptizing them in the name of the Father and of the Son and of the Holy Spirit” (Matthew 28:19).

In the video Go For It!, a primer on evangelism, British evangelist Ian Knox lists four reasons for us as Christians to share our faith. The first three relate to our duty: 1) Christ commands us to, 2) the world urgently needs the gospel and 3) the fields are already “ripe for harvest” (John 4:35).

The fourth reason relates to our own spiritual health. We share our faith because we cannot contain ourselves. This was true of the early church. When the religious authorities ordered the disciples to stop preaching the gospel, Peter’s answer described their burning desire: “For we cannot help speaking about what we have seen and heard” (Acts 4:20).

Evangelism is not a matter of knowing all the answers, nor does it require that we have a sophisticated theological argument. Instead, it is a natural outgrowth of a deep faith. It is something good that we want others to enjoy.

The flip side of this fourth reason is that sharing our faith cultivates a still deeper faith in us. An enthusiastic faith is a contagious faith, and new believers are often the most zealous. When mature Christians see the enthusiasm of a new believer, they cannot help but examine their own relationship with God. And mature Christians who share their faith will find themselves in this situation repeatedly. What might have started as only dutifully helping someone else, changes into a personal desire for intimacy with God.

One of the greatest obstacles to Christians sharing their faith is the mistaken idea that no one is interested. We sometimes make the mistake of assuming people aren’t particularly interested in spiritual truth. The reality, however, is that many people are tired of living without ultimate purpose. Many are actively searching for answers, as evidenced by surveys conducted by Gallup and others.

Most of us are still uneasy, and perhaps even afraid, of sharing our faith. A cartoon captured this sentiment. A dispassionate pastor rhetorically asks his congregation: “The question is, How do we win the world to Christ…with a minimum of fuss and bother?” (Leadership, Spring 1993). Sharing one’s faith should not be burdensome—either to the Christian or to the unbeliever.

Perhaps the biggest factor in our fear of evangelism is the idea that sharing our faith means standing on street corners flagging down unsuspecting sinners. This approach is usually ineffective.

The people who need the good news we bring live in a cynical time, an age without trust, even in little things. We all know, as they say, that there’s no free lunch, so we’re always suspecting a gimmick. How, then, could anyone expect to be effective offering to strangers something so intensely personal as the gospel of Jesus Christ?

Our society needs a different approach—an approach based on trust. That is how the concept of “relational evangelism” was born. When we concentrate on sharing our faith with people who trust us, our words and actions are more natural. No longer are we faced with the need to manufacture some artificial system or argument. The realization that sharing one’s faith is much more effective when a Christian has developed close friendships with non-Christians is the premise of relational, or friendship, evangelism. In “Sharing Our Faith With Friends Without Losing Either,” Monte Sahlin states that placing no conditions on friendship is a vital element of relational evangelism.

Most of us have grown accustomed to our own private worlds, comfort zones where everyone we are close to is a Christian. A few Christians even believe it is wrong to befriend unbelievers. Spending time with unbelievers may be denounced as friendship with the world. Yet, without the willingness to penetrate the world of unbelievers, we’ll never have the opportunity to share our faith with them.

Jesus did not restrict his love to those who sought him. He actively pursued sinners, spending so much time with them that the Pharisees assumed that he was a sinner, too. His response put the matter in perspective: “It is not the healthy who need a doctor, but the sick” (Matthew 9:12).

The apostle Paul may be the premier biblical example of a Christian eager to share his faith. He befriended people. “I have become all things to all men,” he wrote, “so that by all possible means I might save some” (1 Corinthians 9:22).

The key to success in relational evangelism is not how well that we as Christians can argue, or how much we know. The key, Sahlin insists, is listening—really listening.

One of the most important elements that leads to effective relational evangelism is the relationship between a Christian and Christ. We cannot expect success if we give an answer that we have not accepted for ourselves. But when our words about Jesus Christ are based on lives that include him, others will be far more receptive to the gospel.

Sharing our faith as Christians boils down to caring enough about unbelievers to lay down our lives in friendship, and, when the time is right, boldly discussing the good news of salvation through Christ. As Christians, we cannot succeed in sharing the gospel until we’re willing to sacrifice. That means learning to love unbelievers the way God does.

Once we share our faith with others, it’s important that we not abandon them. Like babies who are dependent on their parents for everything, newborn Christians need the support and help of mature Christian friends. That will mean helping them begin lives of Bible study, prayer, and
worship. It will mean sharing the joy of Christian fellowship.

A measure of success

More than two years passed since my former debate teammate and I had discussed Christianity. Both of us had completed our first year in college. For him, our conversation was a distant memory. But to me, it had been a turning point, a catalyst that initiated major changes in my life. That’s why I had to tell him what had happened since that moment.

I rang his doorbell in anticipation. When he came to the door, I wasted no time telling him of my faith in Christ. I’ll never forget how surprised he was. All he remembered was my hostile reaction to his words. Until I met him at his door, he did not know the effect he’d had on my life.

We cannot always see how God is working in our own lives, much less the lives of others. That’s why we must be careful not to dismiss our conversations with unbelievers as ineffective. For most of those to whom we reach out, we’ll only be one stop on their road to conversion. Many other people may be involved as well.

Our measure of success cannot be quantitative—how many people come to Christ through us. Instead, we must measure our success in qualitative terms—how much we reflect the love of Christ and how willingly we share his gospel.