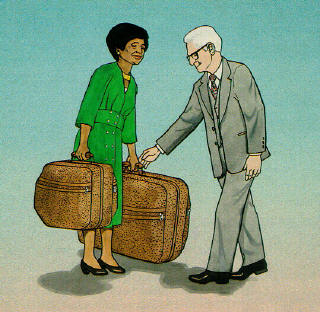 Some of us have a hard time expressing ourselves. We’re not good with small talk. We’re not witty. Get us away from familiar folks and surroundings, and we’re not sure of what to say. Some people don’t go to church because they can’t stand the thought of talking to people they don’t know. Others go to church, but arrive at the last minute, sit in the back row and hurry out the door at the last “Amen.”

Yet, as Christians, our responsibility is to communicate with others, to share our faith. “Let us consider how we may spur one another on toward love and good deeds. Let us not give up meeting together, as some are in the habit of doing, but let us encourage one another” (Hebrews 10:24-25). But how can we share our faith and encourage one another in living Christian lives if we aren’t getting together and communicating with others?

There’s no magic formula for eloquence. But let me share with you a few lessons I’ve learned as a self-confessed nonverbal type.

You can learn to talk to others

I’ve learned that we can learn how to talk to other people. And what better place to learn than at worship services? Practice at church. Begin by getting to know people who find it easy to talk to others. All you have to do is ask them how they are, and then stand back and listen. If they reveal a problem they’ve had that week, and you had something similar happen to you, share your experiences with them.

Letting people talk about their problems helps them to know that others care. Next week, talk to these people again. Since you talked to them before, you’ll have something in common to discuss, and then talk to one or two more people.

One of the most important, and most neglected, aspects of communicating with others is effective listening. The apostle Paul encouraged Christians to “carry each other’s burdens, and in this way you will fulfill the law of Christ” (Galatians 6:2). To share each other’s burdens, we need to know what those burdens are.

Often, friends or acquaintances are most receptive to seeking a closer relationship with God when they are suffering some kind of trial. But unless they feel comfortable discussing their problem with you, they won’t. When people are expressing their feelings, they appreciate being heard. If you are a good listener, they will talk to you.

One of the ways you can be a better listener is to listen with an open mind. If you act shocked and begin to judge and find fault, and then try to correct the individual, you’ve lost your opportunity to help. This world is not an easy place, and some people have a more difficult time coping with life than others. Haven’t we all made mistakes in judgment and then had to suffer the consequences? Listen compassionately. People need sympathy, not judgment.

Another way to be a good listener is to listen actively. If you’re not sure you understand, rephrase what your friend is telling you. For example, “If I understand you correctly, you are saying…” “In other words, you thought that…” “You felt that way because…” “I see, you mean that.…” Repeating what your friend said in your own words helps you focus on what he or she is
saying. It also limits misunderstandings.

Be supportive. If you are able to help, do so. Offer to pray about the problem. Let your friend know you have a relationship with God, and that God cares when we suffer.

James gave us another clue for sharing our faith. “Confess your sins to each other” (James 5:16). To share our faith, we must be able to share ourselves. We must be able to admit that we have sinful human nature as well. We have our faults just like everyone else. Sharing yourself means you admit (confess) that Christian or not, you’ve made your mistakes. This will help people better relate to you.

It’s not easy for most of us to reveal who we are. We fear that if others really know what we’re like, then they will lack respect for us and reject us. But the opposite is often the case. Say, for example, that you haven’t let John, a friend at the office, know that you are a Christian. John is a nice guy, but once in a while he tells an off-color story. You nervously laugh at his jokes, but you’re cringing inside. You don’t want John to think you’re some kind of goody-goody. But you’re not doing John a favor by keeping from him how you really feel. Some day John may need a friend he can talk to about God.

How do you let him know? Begin by offhandedly mentioning something funny your child said at church last weekend. Or talk about why your church softball team lost its last game. Letting John know you are involved in your church sends him the message that you are a Christian. He won’t be as surprised as you might think. Long ago, he probably sensed something different about you. Knowing you are a Christian explains it for him.

He may kid you about it. That’s OK. Or, he may not show any further interest, but if he does, you have the opportunity to share your personal convictions about Christ. Be ready for these opportunities when they come. You never know under what circumstances you may find yourself able to share your faith.

My son-in-law Alan is the vice president of an electrical company in Texas. One weekend an elderly African-American woman in his church asked for his help. A windstorm had snapped a tree limb, which had fallen and knocked out the power to her home. Alan, also a master electrician, set to work repairing the damage. 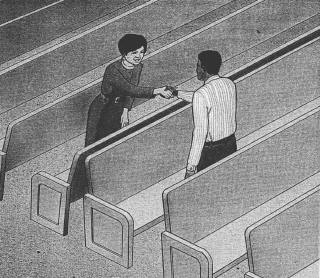 Alan knew Willie Mae well. He, and others, had helped her out before. She was taking care of some of her grandchildren and also had opened her home to others at times. She had built a small house for herself behind her home to free up her home to provide shelter for family members and others in need.

After repairing the damage, Alan had to call a city inspector to get the power turned back on. When the inspector came out, he was not happy with what he found. The wiring in Willie Mae’s house was not up to city code. Alan began to explain her situation, citing her humanitarian efforts in the neighborhood. He told the inspector that she couldn’t afford to have electrical work done by licensed electricians.

Alan said he was there because they attended the same church. The inspector, also African-American, listened with interest to this young white man, here in the middle of a black neighborhood on a Sunday afternoon, defending this elderly woman. “What church do you go to?” the inspector asked. Alan told him. The inspector said he would like to attend next week.

Of course, in sharing information about yourself, you don’t want to talk nonstop about yourself and your walk with Christ. You need to discern when to tell what about yourself, and to whom you should tell it. But don’t be secretive about being a Christian. Make yourself available to people. Sooner or later, they’re going to find out you’re not perfect, and they will feel closer to you because you’re not.

How not to offend

The apostle Paul said not to offend each other. “Let us stop passing judgment on one another. Instead, make up your mind not to put any stumbling block or obstacle in your brother’s way” (Romans 14:13). One of the quickest ways to turn people off is to be judgmental. Who wants to talk to someone who, when you express some belief you have, self-righteously condemns
you for your weakness in the faith, plus a general lack of good sense?

Paul said it’s OK to have some differences in beliefs. Some believe it’s OK to eat meat. Others are strict vegetarians. Some Christians believe the moderate use of alcohol is fine. Others feel even taking one drink is a sin. Some keep certain days holy to God. Others keep other days, and some feel every day is sacred. Paul said we should not condemn people for living according to their consciences (Romans 14).

Once we know how people believe, we should try not to offend them. My grandmother was a teetotaler. She was so conscientious about avoiding alcohol that she wouldn’t eat a bite of fruitcake if she suspected it had rum in it. My grandmother was a fine Christian woman, well-known for her service and kindness to others. Though she knew I believed having a glass of wine with dinner was not a sin, I never drank any alcohol in front of her. Nor would I
have tried to force my belief on her in any way.

“For the kingdom of God is not a matter of eating and drinking, but of righteousness, peace and joy in the Holy Spirit, because anyone who serves Christ in this way is pleasing to God and approved by men” (verses 17-18). Why judge people about such inconsequential things as food and drink, and days and times, and risk driving them away from Jesus Christ?

The importance of fellowshipping

After looking around for and finally finding my teenage daughter after church one day, I asked her where she had been. She replied, with a big smile, “Fellowshipping.” It may not be exactly the kind of communicating I’m talking about here, although teens certainly can and do share
their faith among themselves and with adults.

Fellowshipping involves sharing our lives with others. It involves listening to others, so we know their problems and can pray for them. It means studying God’s Word so we can give an answer to those who ask.