In March, 1989 Mike and Mechanics had the #1 song on the Billboard charts with the smash hit, The Living Years. If you are in my age range, you can already hear the guitar licks in your head while the lyrics flood to the tongue, overwhelm the heart and you join the chorus singing,

“Say it loud, say it clear; you can listen as well as you hear.”

We sing along because that song, like “Cat’s in the Cradle” a decade before, burrowed a mile deep into our souls and still has root decades later. The song deals with the breakdown in communication between a maturing son and his aging father. It speaks to the trivial generational arguments that separate them and become life’s unfinished business when his father dies before reconciliation and acceptance could be completed.

“I just wish I could have told him, in the living years”

As Western culture has been lured into a Bluetooth® love affair with technology, it seems to have sacrificed the blue ink love letters found in personal intergenerational relationships.

Think about it—when was the last time you saw a grandfather fishing with his grandson or a grandmother having her granddaughter over to share the family homemade oatmeal cookie recipe? Video chatting with Skype® too often replaces the extended family gatherings with parents, aunts, uncles, and cousins. Unfortunately, the driving force behind such gatherings now is to mourn one of the family “oak trees” as he or she is being placed in a casket. It never ceases to amaze me how the life-altering lessons and stories of impact flow along with the tears during the memorial service. But by then it’s too late to share them face to face. 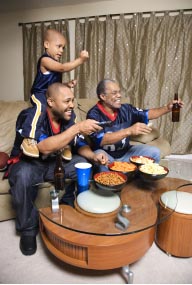 Precious intergenerational relationship time is wasted trying to prove who’s right instead of learning and growing with each other. Instead of giving the youth a twenty-, thirty- or even fifty-year head start on their lives, the elders of the village are frustrated with modern youth’s perceived entitlement mentality and are choosing to “let them learn the hard way.” The youth feel like we’ve given up on them, so they have decided the older generation could never understand their world anyway. What would happen if both groups challenged their perceptions and actually spent time listening to each other?

I would like to make a heartfelt call to all generations! Will you commit to listen and work to bring the generations together? The results will be incredible! There have been men and women, some as much as 60 years my senior, who poured their pearls of great price into my life. I will never forget one man, Harold Jackson, who told me at age 21 that to live the life God had in store for me, I must be willing to “plant seeds of trees that you may never sit under.” I accepted that vision as a young man and have watered, weeded and nourished that seed for the past 20 years with tremendous results. If only Mr. Jackson could know the head start he gave me and hundreds (maybe even thousands) of others! He helped change the course of my life with one sentence. As I think about it now, I’m sure he did know it.

“We just can’t find agreement, in the present tense”

Technology allows us to send thousands of text messages and “status updates” to our smart phones, but one handwritten letter, a card with your personal signature and some home-baked chocolate-chip cookies would send a thousand messages to the heart of a young adult. It could be such an encouragement to a student away at college, a sailor deployed on a Navy vessel or a prisoner incarcerated behind barbed wire.  That’s what intergenerational reconciliation looks like.

This thought became more than a paragraph a few weeks ago when I and 36 other men of various ages hand-wrote letters, baked and prayed over dozens of homemade cookies and spent three days listening to and showing genuine love to 36 inmates in a medium-security prison here in Ohio. If you had told me three days of cookies, conversation, one-page letters and genuine love could turn hardened, isolated inmates into tear-shedding brothers, fathers and sons who see themselves as a family in God, I would have called it a pipe dream. I would also have been wrong.

When the apostle Paul wrote about love, peace, longsuffering and the other fruit of the Spirit he said, “against such things there is no law” (Galatians 5:23). This now has much deeper meaning for me. I saw cultural, social, racial and generational barriers crumble in a weekend. I saw relationships change, pasts lose their grip and prisoners of all ages and stages burst into their present together.

Bridging cultural and generational gaps may be awkward, but the payoffs have eternal value. That is why I believe we must help the next generation be reconciled to their God-given history, heritage and destiny and intentionally pass the batons of life leadership to them when possible. To do so, allow me to offer a few simple insights:

Reconcile with your past and embrace the present

Sure, parts of our culture have dramatically shifted, but if we pull the covers back far enough (and young people are good at that) I know we’ll find more in common than we expect. Different generations see the present from different worldviews, but all worldviews are valid. We must intentionally seek to understand younger people’s worldview before we demand that they understand and accept ours.

The good old days are gone, and frankly they weren’t as good as we romanticize them to be. Honestly, were James Dean, Pete Rose and Marvin Gaye better role models than Charlie Sheen, Barry Bonds or Lady Gaga? Do we really need to compare Vietnam to Iraq or JFK to George W.?

The younger generation has sat at the “kid table” for too long. They need us to invite them to the “big people table” and let them introduce us to their world. Now, unless they have nerves of steel, they won’t venture to our table without a genuine invitation. So hand-deliver one, then stay awhile and learn how they play the game of life. Guess what? They will learn at the same time.

Equip them for their future—not our past

Life today consists of conveniences we fantasized about after being introduced to them by Captain Kirk and George Jetson. Beyond technology, many dreams of my fourth-grade essays are my children’s realities. For example, my 21-year-old college senior wasn’t alive to see the Berlin wall as a barrier, the Showtime Lakers or the White House before Bill Clinton. She has, however, seen the first African-American President, a dream that was almost unimaginable when her dad was born. There is a new future to reach for, and that changes everything.  We are charged to equip them to navigate the changes ahead, which means we must first let them show us their dreams.

Let go of the baton

It would be arrogant of us to assume we have all the answers for the world they are walking into. History is a great teacher but heritage is a toolbox for the future. Commit to passing the baton of leadership to them and letting go.

I have been blessed to serve as a director of a regional youth camp in the northeast corner of the U.S. for eight years. I have been involved in camp leadership and ministry for 27 years. A month ago, I joined six other directors as we literally and publicly handed off the baton of leadership to the next generation of camp directors. We did so because it’s time for their leg of the race. Now our job is to cheer, motivate and empower them run with all their might and hold the baton until the next exchange zone. They can’t run their race if we don’t let go of the baton. 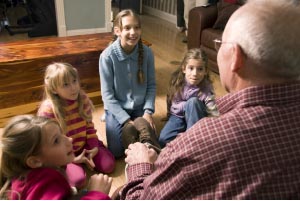 So, let me say it loud and clear: Mike and the Mechanics had it right. “It’s too late when we die, to admit we don’t see eye to eye.” There are generational and cultural gaps that can cripple our relationships and our future. It’s time to listen to each other, hear each other, run with each other and cheer each other on. It’s time to live out Jesus’ dream, “that they might be one as we are one.”

Jeff Broadnax is Senior Pastor at CenterPointe Church in Grove City, Ohio, and Voice of Hope Church of God in Chillicothe, Ohio. He graduated from Ambassador College in 1987 and has served in full-time ministry for 25 years. He has a master’s degree in counseling from Western Connecticut State University.