Fall 2015 marked the 100th anniversary of Albert Einstein’s releasing his General Theory of Relativity to the world. That was in a speech at the Prussian State Library in Berlin in November, 1915. Einstein’s theory was that gravity bends both space and time, and that therefore the classical physics based on Sir Isaac Newton’s assumptions of predictable “straight line geometry” needed revision.

Einstein was already famous for his Special Theory back in 1905, which showed that time did not work the same way all across the universe, a further undermining of the classical view. Indeed by the late 1800s the anomalies of nature (e.g. why Mercury’s orbit was shifting) kept raising more and more questions about Newtonianism. By then, scientists thought they had nailed down the structure of the atom (Greek for “that into which nothing further can be divided”). Yet as the century wore on Einstein and his generation investigated so many new subatomic phenomena that the term “The New Physics” came into view. Where Einstein had led, Niels Bohr and others followed. Bohr discovered the “quantum leap” where movements of the electron circling the nucleus of the atom were shown to be virtually impossible to predict. By the 1980s physicists were familiar with a whole realm of invisible particles with names, said one journalist, like those from Lord of the Rings: hadrons, leptons, muons and quarks.

I had been teaching teens in Bible class since the 1970s that—relative to God—we all believe in things we can’t see. I cited Hebrews 11:3, “By faith we understand that the universe was formed at God’s command, so that what is seen was not made out of what was visible.” But not being a scientist I had not realized how much truer that statement had become in the strange world of particle physics. The invisible was fundamental to nature, and extremely powerful. 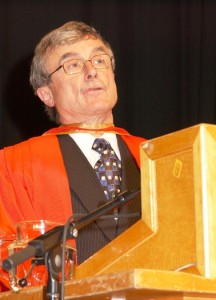 Imagine my surprise and delight, then, this fall when my hometown paper saluted my cousin, the retired nuclear physicist, Davis Earle for contributing to a team that won the Nobel Prize in Physics for 2015, particle physics in particular. As Dr. Davis Earle he had been technical associate director on a project studying neutrinos one mile underground in an abandoned mine near Sudbury, Ontario. “Neutrino” is Italian for “little neutral ones,” millions of which pass invisibly through our bodies each second, part of that invisible universe.

My cousin Dave had totally bemused an interviewer by driving home what atomic and particle physics emphasized. “Our bodies are empty space,” Dave enthused. “I cannot emphasize how much empty space we are. It’s just the electromagnetic force that holds everything together.” Strange, humorous—but true. The electromagnetic force was uncovered by the Scotsman James Clerk Maxwell in the 1860s and Einstein had a picture of both Maxwell and Newton in his Princeton University office. How fitting. The drawings we see of the electron circling the atom are not true to scale. The circling electron has as much space as a bumble bee inside a cathedral. Empty space. Cousin Dave was just repeating what the New Physics had underscored.

The New Physics—a worthy phrase. The concept fully hit home to me in 2012, when I signed up for Dr. John McKenna’s “Scientific Theology of Thomas Torrance” class (as it was then called), taught at Grace Communion Seminary. The New Physics underlined how the most powerful forces known to us were invisible. Forces such as gravity, electromagnetism, the strong force, the weak force—these unseen realities were holding our bodies and the cosmos together. Paul’s words hit home—“what is seen was not made out of what was visible.”

What came clear in Dr. McKenna’s class was how the Scottish theologian Thomas F. Torrance brought home to Christian theology parallels to the New Physics. Torrance saw that Einstein and his generation had opened up a whole new view of reality. In his book Space, Time and Resurrection and elsewhere, Torrance argued for a cosmos that was orderly enough to be investigated yet “strange and unpredictable” enough to allow for new and unexpected things to take place. “Far from being closed or predetermined,” he wrote, “the universe constitutes an open-textured system in which novel forms of order constantly emerge.”

This includes neutrinos and quarks. “Quarks”—a strange word, yet part of what Caltech’s Kip Thorne calls “Einstein’s outrageous legacy.” Here at the heart of the proton were those strange, whirring spinning creatures that were hard to measure and keep account of and given whimsical names such as Strange and Charm. The British journal New Scientist even admitted, “After quarks, believing in the Virgin Birth is a doddle (a snap).” I couldn’t help think of how my friend and amateur physicist John Halford would have enjoyed that. The most powerful forces were and are invisible and people such as Thomas Torrance saw the connections to Christian theology from such statements as Colossians 1:16. There Jesus is shown supreme over things visible and invisible. These were some of the new realities that flowed from General Relativity and Quantum Theory. All this allowed room for Torrance to argue for a universe geared to both the orderly and the unpredictable. In his theology—much more fulsomely argued in such works as Space, Time and Resurrection—this discovery about creation removed certain “scientific” arguments against Christian faith and seems to indicate how God allowed for the possibility of an Incarnation and a Resurrection to take place in his good creation.

On the trail of neutrinos and quarks, Torrance well knew, the ancient wisdom of Ecclesiastes 11:5 rang truer than ever “As you do not know the path of the wind, or how the body is formed in a mother’s womb, so you cannot understand the work of God, the Maker of all things.”