Christianity is a life and death struggle for eternal stakes. But we are promised victory.

Rich, bustling, cosmopolitan Ephesus—a city of 225,000 people in the first century—was one of Satan’s strongholds in antiquity. Historians called it “the throne of idolatry.”

For generations the merchants of Ephesus had hawked their silver idols without hindrance. Until a.d. 52. In that year the apostle Paul, the first century’s greatest one-man threat to idolatry (Acts 17:16), walked into town (Acts 18:19). A mighty work of evangelism blanketed the province of Asia (Acts 19:10). Paul spoke out, proclaiming the empty corruption of idol worship and calling the people to repentance (Ephesians 5:5).

Multitudes responded to the gospel. They dumped their astrological guides and esoteric charts associated with the goddess Diana—worth 50,000 pieces of silver (Acts 19:19).

But the silversmiths struck back (Acts 19:24-28). They used their influence to trigger a great religious hysteria against the work of Paul (Acts 19:34). Paul wanted to face the mob –which he referred to as beasts — but his friends wisely persuaded him to retreat (1 Corinthians 15:32, Acts 19:31).

In a.d. 61, while under house arrest in Rome, Paul tried to steady the Ephesian church for the tough years ahead; a time when, as he had already warned, they would have to carry on without him (Acts 20:17-28).

Materialism, commercialism, a cynical sensuality—these constantly threatened the faith of Paul’s converts at Ephesus. Religious deception was rife. How could Paul rally the church to carry on their spiritual battle without him? Near the end of his letter to the Ephesians, the Holy Spirit filled Paul with a stirring word picture drawn from Paul’s prison experience.

We can almost see the creative fires burning inside Paul as he neared the end of his letter. “Put on the full armor of God,” Paul concluded, “so that you can take your stand against the devil’s schemes” (Ephesians 6:10-11). “The Roman soldier has his armor,” Paul was saying, “so does the true Christian.”

With the armor of God we can brace ourselves for the battles we will face in our Christian lives (1 Timothy 6:12). We, like the Ephesians, are up against Satan’s wiles. But we, like them, will win!

Second Corinthians 4:4 exposes Satan as the “god of this age.” It’s no stretch to see what Paul means in Ephesians 6:12: “For our struggle is not against flesh and blood, but against the rulers, against the authorities, against the powers of this dark world and against the spiritual forces of evil in the heavenly realms.”

Soldiers who have been briefed by their commander-in-chief are on spiritual alert. They expect battle! That is why Paul counseled young Timothy: “Endure hardship with us like a good soldier of Jesus Christ” (2 Timothy 2:3).

“Stand firm then, with the belt of truth buckled around your waist” (Ephesians 6:14). The Roman soldier’s two-edged sword hung from the protector belt around his waist. The belt protected his loins, but also put his sword within quick and easy reach. In Paul’s analogy the sword is the word of God, the sure promises and faithful instruction of the gospel recorded in the Bible.

God’s Word is the Christian soldier’s offensive weapon. It cuts through the negativism, accusation, doubt, hopelessness—those favorite “wiles of the devil.” While the belt of truth protects our vitals, we also draw inspiration and hope from the living scriptures, “the sword of the Spirit” (Ephesians 6:17).

With the Bible as our sword, we switch from the defensive to the offensive (Hebrews 4:12). Bible study bathes our mind and spirit in hope and enthusiasm (Psalm 119:97).

“Stand firm then … with the breastplate of righteousness in place” (Ephesians 6:14).

In our battles to put down lust, anger, fear, pride and doubt we often set ourselves up for discouragement when we don’t make the progress we would like (Philippians 3:12). Even the veteran Paul faced this (Romans 7:19). But he excelled as a Christian soldier because he tapped into “the hope of righteousness by faith” (Galatians 5:5). God gives us righteousness through Jesus Christ living inside us by the power of the Holy Spirit (John 14:23).

This righteousness goes beyond mere human righteousness, will-power and self-instilled emotional highs. It engenders a relaxed, calm blessed assurance in God as our Redeemer and Ally.

The righteousness of God is ours by faith (Romans 3:22). The Roman soldier wore a tough leather breastplate strengthened with metal strips. It was difficult to pierce. So with the Christian. The certain conviction that Jesus Christ’s own righteousness is at work in us through the Holy Spirit wards off Satan’s “fiery darts” (AV), the crafty whispers that tell us: “See, you’ve sinned again. You’ll never make it. Why don’t you give up?”

The Roman soldier’s leather sandals were essential in battle. Solid footing on difficult terrain often gives the winning edge in battle. Three times Paul encouraged Christian soldiers to stand, “your feet fitted with the readiness that comes from the gospel of peace” (Ephesians 6:15).

Julius Caesar’s watchword as a general was celeritas!—swiftness! The Roman sandals symbolize mobility, preparedness, speed. “A moving target is harder to hit,” is still a good military maxim. So it is with Christian soldiers. Those actively living out the gospel of peace are hard for Satan to pin down! 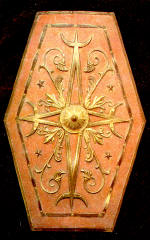 Incredible stories survive of the massed strength of the Roman shields. Take the “tortoise” formation, for example. Squads of Roman legionnaires would align their shields over their heads while the outer ranks held their shields in front of their bodies forming an impenetrable square called the tortoise. A crack unit could form a tortoise so securely that a horse and chariot could ride on top of it.

No wonder, then, with this in mind, Paul counseled us: “In addition to all this, take up the shield of faith, with which you can extinguish all the flaming arrows of the evil one” (Ephesians 6:16). Christian soldiers are shielded by faith, the unshatterable conviction that our ultimate victory is assured (Romans 8:38-39).

Are there fiery darts in the Christian life? Yes, plenty. Gossip, evil reports, sly innuendos, the bitter faith-destroying attacks on doctrine. There are unwanted health reports, quarrels with neighbors, unexpected personal clashes at work. Some of the cruelest and most effective darts come from the people closest to us. But the shield of faith—knowing that God has already secured our ultimate victory—extinguishes Satan’s darts every time (Romans 1:16). 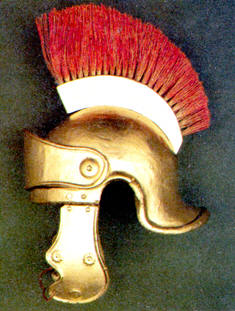 Even today in potentially violent sports such as football, car racing and ice hockey, a helmet is mandatory. In 1 Thessalonians 5:8 Paul highlights “the hope of salvation” as vital Christian armor. Our warfare is so constant, so incessant, so fierce that we could easily collapse under the strain of battle fatigue. This is why good morale is so important in the Christian fight.

A stirring battle order inciting to combat is usually the last stage in galvanizing soldiers for victory. From where do we get our battle orders? From Jesus Christ, our Commander-in-Chief, who is the living Word of God: that “through endurance and the encouragement of the Scriptures we might have hope” (Romans 15:4). This spiritual headgear protects the head, the brain, where the Christian soldier aims to “take captive every thought to make it obedient to Christ” (2 Corinthians 10:5).

What hope God gives us in his Word! For centuries Christians have gleaned inspiration from such stirring passages as Joshua 1, 1 Peter 1-3, Hebrews 11 and the books of Ruth, Esther and Psalms. And we need it. Sometimes the battle is intense indeed.

Paul ends the paragraph by recognizing our need for divine help: “And pray in the Spirit on all occasions with all kinds of prayers and requests” (Ephesians 6:18).

Paul knew that his Ephesian brothers and sisters—and we too—can stand through all the shocks and alarms of the Christian life. Jesus Christ, the Captain of our salvation (Hebrews 2:10, AV), has promised us the victory.