A discussion with Philip Yancey

Multi-award winning writer Philip Yancey has written books that have explored many of the mysteries and wonders of spiritual life. Christian Odyssey’s Editor John Halford recently met with Yancey in London to discuss his latest book, Prayer: Does it make any difference?

Question: This new book on prayer seems different in tone to your previous ones. It seems more—well, pastoral. Am I right?

Philip Yancey: My natural instinct is to be a pilgrim, wandering around and seeing what I can honestly say about a subject. But I learned so much that I became more than just a pilgrim. I became someone who wanted to share, and so there are parts that are more pastoral than anything I have written before. I felt different as I was writing this.

Q: The book seems not so much about how to pray as why to pray.

Yancey: Right. I do talk about various techniques, but what I am not trying to do is to put forth a formula that everyone should buy into and follow my rules. Some of them I find quite helpful, but not everybody will.

The important thing about prayer is to lower the uptightness about it and encourage people to be straightforward and honest and to cultivate a relationship with God. The more I set forth some sort of formula the more I encourage the feeling of “I am inferior and I am not doing it right.”

Q: This is quite a long and comprehensive book. If there is one thing you would want the reader to learn from reading it, what would it be?

Yancey: To see prayer not so much as a discipline and more of a privilege. It is for our benefit in every way. So much of what we are asked to do as Christians is often presented as a legalistic works-oriented way—do this and God will like you more. But I can’t think of anything in a Christian life that is not meant to enhance our lives. God is not trying to make us small. He is trying to encourage us to be larger than we are. And we can’t really do that without a deep connection with God, and that connection is prayer.

Q: How would you help someone who said “That is OK for religious people, but I am not the sort of person God wants to listen to?” 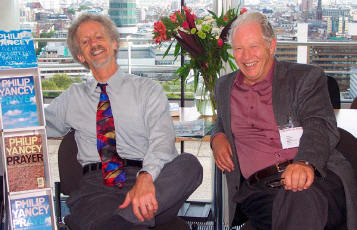 Yancey: Jesus told a story about two people who prayed. One was a religious professional, theologically trained, and the other was a person who said, “I am not the kind of person God wants to hear from. Have mercy on me, a sinner.” God listened to him, and not the other. The one had words but not the heart, and the other had nothing but his heart. He simply said, “God, I need help.” Often the only prayer we have is “help,” and I think God listens to those prayers more than the “Thee’s” and “Thou’s,” and all the eloquent things we say.

Q: Many of our readers come from a legalistic background, similar to yours. This can have a negative effect on prayer. Have you any advice for people struggling with this?

I have a friend who talks about the Harlem Globetrotters team. She says you have to be really good to be that bad! The way they play, they must really know what they are doing. You have to be disciplined to be free. Not only that, you have to have been a legalist to really appreciate what it means to be free.

Even God started with law and brought us to grace. The apostle Paul prayed every day for 30 years, “Thank you that I am not a woman, a Gentile or a slave.” When he later said, “In Christ there is no male or female, no gentile or slave,” it was a radical change, and it takes someone who had prayed that way for 30 years to truly appreciate what a dramatic freedom—a leveling—it was.

So I am sure I missed out on a lot of fun things because I lived in a very rule-oriented environment. Although it probably stopped me doing a lot of things I should not have been doing anyway.

I do things now that the church I grew up in would certainly frown on. It is freedom won the hard way. I wrote a book called What’s So Amazing about Grace? It is amazing.

Q: You have written a very practical and positive book. While researching it, did you come up with anything that is so toxic to effective prayer that you could say, “Whatever else you do, you must not do that”?

Yancey: Don’t fake it. A lot of us are like children playing “peeka- boo,” hiding their faces in their hands so you can’t see them. They are the only ones being fooled. But a lot of us do that in prayer. We come to God, put on a smile and make ourselves look good, but we aren’t fooling God. God knows the secrets. The more we put on a mask, the more we misrepresent ourselves. I heard a great sermon about Ananias and Sapphira in Acts 5. You don’t hear much about them, except in sermons on Stewardship Sunday. But this preacher asked what it was that they did wrong. It was not that they did not give their money away. Peter said they didn’t have to. But they misrepresented themselves to God.

The whole Bible is full of what God puts up with from us—complaints, anger, remorse, repentance. But if you pretend to be something you are not, he can’t work with you.

Quotes from Prayer: Does It Make Any Difference?

• Like the people who write me letters, Jesus knows the heartbreak of unanswered prayers. His longest prayer, after all, centers in a request for unity, “that all of them may be one, Father, just as you are in me and I am in you.” The slightest acquaintance with church history (at recent count 34,000 distinct denominations and sects) shows how far that prayer remains from being answered. (p. 81)

A lot of us are like children playing “peek-a-boo,” hiding their faces in their hands so you can’t see them. But we aren’t fooling God. God knows the secrets.

• Prayer is cooperation with God, a consent that opens the way for grace to work. Most of the time the Counselor communicates subtly: feeding ideas into my mind, bringing to awareness a caustic comment I just made, inspiring me to choose better than I would have done otherwise, shedding light on the hidden dangers of temptation, sensitizing me to another’s needs. God’s Spirit whispers rather than shouts, and brings peace not turmoil. (p. 103)

• The question that obsesses modern thinkers, “Why do bad things happen?” gets little systematic treatment in the Bible because Bible writers believed they knew why bad things happen: we live on a planet ruled by powers intent on blocking and perverting the will of God. The New Testament openly describes Satan as “the god of this age” and “the ruler of the kingdom of the air, the spirit who is now at work in those who are disobedient.” On a planet ruled by the Evil One we should expect to see violence, deception, disease, and all manner of opposition to the reign of God. (pp. 117-118)

• Real power rests in those who perceive history as God’s own drama, who tap into a power accessible only to those who ask and seek and knock. Prayer sets God loose. As we revolt against the world’s disorder in our actions and in our prayers, refusing to resign ourselves to evil, we demonstrate that there remains, in Jesus’ phrase, “faith on the earth.” (p. 150)

• Jesus did not waste miracles; I doubt he would have provided food for the five thousand if food stalls had been readily available nearby. (p. 256).