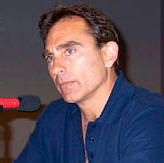 In his Epistle to the Romans, Paul reminds us to “clothe yourselves with the Lord Jesus Christ” (Romans 13:1). The Greek word is enduo, meaning “to put on as a garment,” or as an actor will put on a costume. Few people have had the opportunity to do this as literally as Bruce Marchiano, who played the lead role in a dramatization of the Gospel of Matthew.

Question: Playing the role of Jesus in Matthew had a major impact on you. Why?

Bruce Marchiano: Wow. I wrote a whole book to answer that question. I think it boils down to that scripture, “When you seek me with all your heart I will be found” (Jeremiah 29:13-14). That’s what that acting experience was for me. It put me in a position where I had to seek him with all my heart. My mind exploded with the Wow of him! And within that glimpse of understanding, all my priorities were rewritten, all my motivational foundations were rewritten, everything I thought was important was rewritten. Ah, but even beyond that, my sensitivities were rewritten.

What an actor does is to try to step into another person’s heart. To catch a tiny, tiny, billionth of a billionth of a glimpse of Jesus’ heart was to rewrite my own heart, if I can put it that way. The depth of his compassion, the depth of his heartbreak over human pain, over the lostness of lost people, over people coming short of his plan and purpose for their lives.

There are times to this day when sitting at a red light I’ll just break down in tears watching the people walking the sidewalk, as I think about their lostness, having caught a glimpse of Jesus’ reaction to these things that we just call normal life. To have those little seeds planted in my own life was to rewrite my entire life.

Question: Were you a Christian before you starred in this film?

BM: I grew up very “churched.” I went to Catholic schools until I graduated from high school. I had a deep understanding in terms of the awareness that there is a God, but I had no understanding of a relationship with God. People around me would get born again and they would start to share Jesus with me. I thought they were nuts. My whole life was about my acting career. Then, to make a long story short, the rug was pulled out from under it.

And I found that everything I had built my life on was “weak and shifting sand.” All I can say is, I just turned to Jesus. I guess that all those seeds from those people who had shared Jesus with me over the years took root somewhere deep inside, because I knew in that moment I needed Jesus. I remember getting down on my knees and looking up saying, “Jesus, you’ve got to save me. You’ve got to save me.” And he began to reveal himself in my life, and there was no looking back.

Question: How did you come to take on the role of playing Jesus in Matthew?

BM: I found out about the opportunity through the leader of a missionary team. I had gone on this mission trip. I didn’t really want to, but I felt the Lord really wanted me to go. And so I went, kind of unwillingly. Little did I know that it would change the rest of my life.

The guy who led that missions team told me about the opportunity, and I made contact with the director. The director is a man who really seeks God, and he felt very strongly that the Lord wanted a born-again Christian to play Jesus. He also wanted someone who was not the traditional iconic figure—tall, Anglo-Saxon—but someone more authentic.

He sent me an audition piece for the scene where Jesus speaks very harshly to the Pharisees. As I was preparing for the audition, I thought, you know, it wasn’t that he didn’t like these guys. He loved them. He wasn’t so much being harsh as desperately and passionately reaching out to help them.

I explained that to the director, knowing full well that it was a great risk, because I had never seen it done that way before. Little did I know that six months earlier, when the director began working with the script, he felt the exact same thing, that this scene needs to be done in love.

Question: It is quite obvious in Matthew that you portray Jesus as the Lord of love and joy—quite different from the way he is usually portrayed.

BM: Well, the joy was a surprise to me. In my church background, joy was not part of the program. You could use the word in a song, but you’d better not actually show it. The director pointed me to Hebrews 1:9 where it says of Jesus, “Therefore God, your God has anointed you with the oil of joy above your brethren.”

I went down to a local Christian bookstore to try to find books about the person of Jesus. I couldn’t find any—not about Jesus the man. To make a long story short, I eventually found this little Christian bookstore, and there, sitting in the commentary section was a small book titled, Jesus, Man of Joy. It was misplaced, and I knew that God was trying to say something to me. So that’s where the joy came from, and that built and built. It just opened up—joy. Joy, that’s what the kingdom of God is. It’s joy.

At the end of the day all I really did was what Jesus said. He says, “I have loved you with an everlasting love.” So as an actor I did that. Jesus didn’t talk about loving people, he actually did it. He cried tears over their pain. Instead of just talking about compassion, he actually showed it.

There is never a moment when he doesn’t love you. So everything I did, even the harshest rebuke, had to be founded on love, in the same way that you would tell your kid not to touch the stove. You would say it harshly, but it’s founded in love. If you didn’t love your kid, you wouldn’t care if he touched the stove. And that’s all I was trying to do. I was trying to keep them from touching the stove.

That became the challenge. Even in a line like “you hypocrites” or “you of little faith,” the audience had to see that love. It became quite a transforming factor for me. I would walk away from those scenes and realize, wow, he loves me!

I remember we did one scene where Jesus tells the parable of the sheep and the goats. On the first take I talked about how he will say to the goats, “Away from me, I never knew you.” Spontaneously I just started to weep and weep and weep. Unfortunately that’s not the tape that got on screen. Believe it or not, in the middle of the shot an airplane went overhead and ruined the tape. But the outtake of that, to see “Jesus” weeping in the same sentence that he is talking about people who are going to be condemned, that’s a revelation.

When we finished that shot, there were 300 people standing around. You could hear a pin drop. Nobody ever imagined it like that. It was just a revelatory moment. You’ve got to understand that what we were doing was the Word of God, and that it’s living and active, and sharper than any two-edged sword.

Time after time, I walked away learning something about Jesus’ heart. Every day was just a lifetime of adventures. There wasn’t one moment out there where it was just a job or drudgery.

Question: It seems that making Matthew has changed the direction of your life.

I just began to pray, “Lord, what is my life all about? What’s the purpose for which I was born?” It’s probably a guy thing, but I was thinking vocationally. I was thinking God was going to say, “You’re a filmmaker,” and that meant I wouldn’t write books or speak anymore. Or, “You’re
a speaker.” But that’s not what the Lord said to me.

In the way he deals with me it’s as if he said to me, “You were born for the purpose of revealing my Son to my people. So I want you to take every opportunity, whether it is a book, or an interview like this, speaking in front of people, no matter what setting I put you in, reveal my Son, reveal my Son.”

Suddenly my life became clear. And I think the Lord would say to every one of us who claims to be a child of God, “You’re born for the purpose of revealing my Son to my people.”

Question: Do you have any exhortation and encouragement about how to share this with others?

BM: If I have to point to five highlights of my ministry life, one of them is my relationship with this denomination. I remember, ten or so years ago, as things were changing. I don’t know the whole history—it doesn’t matter—all I know is that I saw people in love with Jesus and bouncing off the walls with a fresh awareness of grace.

Back in those days I’ll never forget thinking, “Wow—these people, all they know is grace and the love of Jesus.” That’s all there is to know, in a sense. And the celebration of freedom, because he’s all about freedom and liberating people from sin, complication and self-reliance.

It was so exciting. I have said many, many, times that the transformation of your fellowship could be the greatest work of the Holy Spirit in the last 25 years.

Don’t move from that place. Don’t ever become a sophisticated denomination full of things. Just be a bunch of little kids in love with Jesus and stay there. Stay there. That’s where the rest of us need to catch up to.