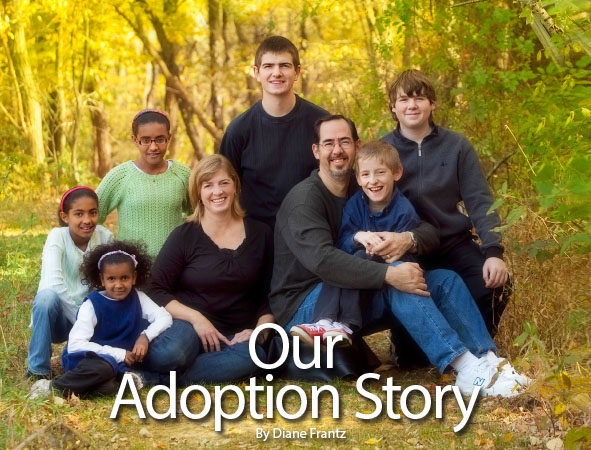 Eric and I always wanted a big family. We already had two boys when our third child, Stuart, was born prematurely and spent 10 weeks in the hospital. He was diagnosed with spastic quadriplegia cerebral palsy. The doctors couldn’t tell us what caused his early birth, so another biological child was out of the question.

Although we wanted more children, we did not dare risk my health or the health of another child, so we quickly got caught up in the business of raising our three sons, schooling them at home and providing a loving and nurturing family for Stuart, where he was included in everything we did.

The idea of adoption, however, was always in the back of our minds. Then, in 2007, I met Patty. Patty shared a picture of three siblings from Ethiopia whom she and her husband hoped to add to their family. She explained that they were waiting for the call to go and pick them up, and they weren’t sure how soon it would be. She was an inspiration to me, but little did I know that she, her husband and their whole family (now 21 kids—8 biological and 13 adopted, including several with special needs) would become our adoption mentors and good friends when we started our own journey toward adoption.

Eric and I were attending a concert in Cleveland in 2009 when one of the performers promoted an international and domestic adoption agency. During the breaks in the music, we heard moving stories about adoption and sponsoring children in need. I looked at Eric and we both communicated in that “one look” that we needed to sign up to sponsor a child. Later, we were talking about the sponsorship with our boys when Morgan, our oldest, asked us if we had ever thought about adoption. Eric and I replied, “Why, yes, we have, many times, but the time was never right.” “Well, what about now?” Further discussion ensued and we decided to consider it seriously. 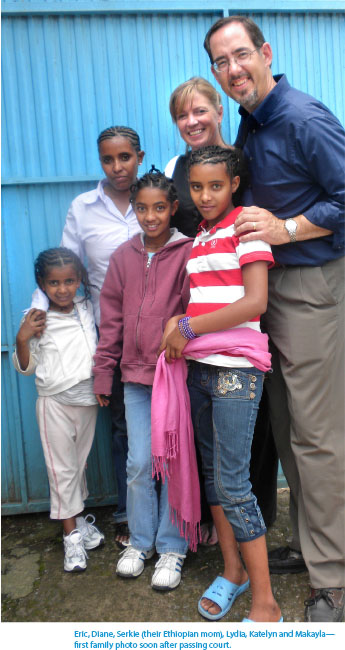 After many family discussions, prayers, research, conversations with our mentors, friends, adoption agencies and other adoptive parents, our journey to make a difference in the life of a child began in earnest. With each step of the process, we prayed as a family for God’s direction—which agency to use, which country to adopt from, what we needed to do and what sacrifices we were willing to make. At every turn, we felt we God was leading us toward Ethiopia.

By June 12, 2009, less than six months after we started planning, we were “paper ready,” which included a home study, fingerprinting and background checks with USCIS, having documents and signatures notarized, obtaining copies of birth certificates, our marriage license, financial records, passports updated and many other documents gathered and processed with our local, state and federal governments. These documents now fill a 5” 3-ring adoption binder and several other binders.

We chose to adopt from our agency’s list of “waiting children”—children who are older and harder to place. We first reviewed the list on June 15, but no children “jumped out” at us. We hoped to adopt one or two girls younger than Stuart, ideally sisters. Two weeks later we called for an updated list and our agency said a file with three girls (siblings) had just come in and asked if we wanted to look at it. Looking at a child’s file is an intense and personal experience, and we wanted to make sure we were serious before we reviewed it. I called Eric and we discussed it before sayin yes. When we reviewed their file, we just knew these three little girls were the answer to our prayers. We discussed it some more and prayed about our decision, and within 24 hours we had verbally committed ourselves to them and then signed the paperwork to make it official. This was the beginning of the real wait—a process that took 18 months from the time of commitment to bringing them home. 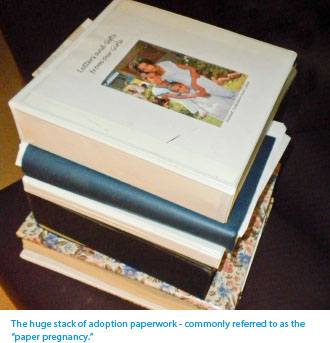 During this wait, I asked God to help me understand the thought processes of their mother—a mother who had come to the point where she was willing to give up her three precious daughters. I knew if I were in her situation with my boys, it would be the hardest moment I would ever experience. It was then I felt God move me to remember the story of two women who went before King Solomon arguing over a baby (1 Kings 3). The true mother told the king it wasn’t her baby so he wouldn’t cut the baby in half for them to share. She was willing to sacrifice her right to her baby in order to save his life. Here was the peace I needed. I didn’t know the mother’s circumstances, but she was willing to make an enormous personal sacrifice to give her children a better future. I had my “King Solomon” moment on August 2, 2010, when she appeared before an Ethiopian judge, relinquished her rights and gave her three daughters the opportunity to join our family.

The adoption process took much longer than we expected. There was corruption in some adoption agencies, and all adoptions in the region stopped for a while. Our agency asked us several times if we wanted to change our commitment, but we stood firm and told them we would wait for our new daughters no matter how long it took. We believed these three girls were supposed to be in our family, and we wouldn’t even consider starting over.

Soon after our commitment to them, we put together a small “welcome to the family” bag, and our agency delivered it to the girls. We formed a bond with them through letters and photos that were carried back and forth by other adoptive parents going to Ethiopia to pick up their children. Then came the biggest surprise of all.

My friend and mentor, Patty, offered to pay my way to Ethiopia so I could meet the girls in person. I had less than two weeks to prepare, but on January 15, 2010, I boarded a plane bound for Ethiopia. Not only did this trip change my life, but I was able to go back with Patty again two months later in March 2010. This time Morgan, our oldest, was able to come along. It was a wonderful opportunity for him to meet and get to know his sisters-to-be and see the world from a different perspective. Morgan had many opportunities to serve others on that trip, and those memories will last a lifetime for all of us.

As the adoption process dragged on, we’d started asking others to pray. We called it our P.U.S.H. (Pray Until Something Happens) campaign. We kept sending letters and photos to the girls, and we kept believing that someday soon, even though we didn’t know when, all the necessary paperwork would be signed and processed.

On June 30, we received the good news that all the paperwork was complete except for their birth certificates. Their birth certificates were ready a few days later, and at last our case was submitted to the court. Our court date was set for August 2, and Eric and I were both required to appear in court in Ethiopia. We had less than two weeks to make all the arrangements, but we were getting close!

Finally, on August 2, after many months of delay and uncertainty, we came before the judge, and he decreed the girls were now ours. They had become our daughters, but we couldn’t take them home yet. There was still one more hurdle to clear: final approval from the Embassy. We returned to the U.S. and waited. About a month later, Trevor, our middle son, and I jubilantly traveled back to Ethiopia again.

Our family has three important celebrations each September: September 7 is Gotcha Day—the day I was able to pick up the girls and take them to our guest house. September 8 is the day we celebrate Passed Embassy Day, when the U.S. government declared the girls were officially ours and we could take them home. Finally, on September 14, we celebrate the day Makayla, Katelyn and Lydia Frantz first set foot on American soil, becoming U.S. citizens and coming to their “Forever Home.”