Jesus’ disciples sometimes had delusions of self-importance. They once asked Jesus, “Who is the greatest in the kingdom of heaven?” (Matthew 18:1). In other words, what personal characteristics are the best examples of what God wants in his people? 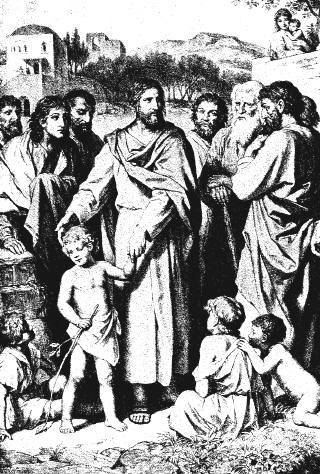 It is a good question, and Jesus used it to make an important point: “Unless you change and become like little children, you will never enter the kingdom of heaven” (verse 3).

The disciples must have been surprised, even puzzled. Perhaps they had been thinking of people such as Elijah, who called down fire from heaven to consume some enemies, or a zealous person like Phinehas, who killed sinners (Numbers 25:7-8). Were they the greatest in the history of God’s people?

Their idea of greatness was misguided. Jesus said that what God wants most in his people is not bravado, not spectacular works, but childlikeness. If we do not become like little children, we will not be in the kingdom at all!

In what way are we to be like children? Are we to be immature, childish, uninformed? No. We are to put childish ways behind us (1 Corinthians 13:11). We are to discard some characteristics of children, while keeping others.

One characteristic we need is humility, as Jesus says in verse 4: “Whoever humbles himself like this child is the greatest in the kingdom of heaven.” The humble person is, in God’s way of thinking, the greatest—the best example of what God wants in his people.

This is because humility is characteristic of God himself. God is willing to give up his privileges for our salvation. What Jesus did in becoming flesh was not contrary to God’s nature—it revealed what God is like all the time. God wants us to be like Christ, willing to give up privileges to serve others.

Some children are humble, but others are not. Jesus used one particular child to make a point: We are to see ourselves in certain respects as like children—particularly in our relationship to God.

Jesus also pointed out that as children, we ought to welcome children (verse 5), and he probably meant this both literally and figuratively. Adults should be attentive to and respectful of young people. We should also welcome and respect people who are young in the faith, immature in their relationship to God and in their understanding. Humility involves not only our relationship with God, but also with other people.

Jesus knew that he had a unique relationship with God. Only he knew the Father well enough to reveal him to others (Matthew 11:27). Jesus called God by the Aramaic word Abba, an affectionate word that children and adults used for their fathers. Perhaps the best modern equivalent is “Dad.”

In prayer, Jesus talked to his Dad, asking him for help and giving him thanks for whatever he had. Jesus says that we do not have to flatter our way into an audience with the King. He’s our Dad, and we can talk to him because he is our Dad. He has given us that right, so we can be confident that he hears us.

Although we are not children of God in exactly the same way that Jesus is the Son, Jesus taught his disciples to pray to God as their Abba. Many years later, Paul could assume that the Roman church, more than a thousand miles from Aramaic-speaking lands, called God by the Aramaic word Abba (Romans 8:15).

Using the word Abba isn’t required in prayers today, but the widespread use of the word in the early church shows that it made an impression on the disciples. They had been given an especially close relationship with God, a relationship that gave them guaranteed access to God through Jesus Christ.

The word Abba was distinctive. Other Jews didn’t pray like that, but the disciples of Jesus did. They knew that God was their Dad. They were children of the King, not just members of a chosen nation.

The apostles used several metaphors to help communicate the new fellowship that believers have with God. A term like redemption conveyed the idea that we belong to God. We were redeemed from the slave-market of sin through an enormous price—the death of Jesus Christ. The “price” wasn’t paid to anyone in particular, but it did convey the idea that there was a cost involved in our salvation.

A term such as reconciliation emphasized the fact that we were once enemies of God, and are now restored to friendship through Jesus Christ. His death allowed our sins, which separated us from God, to be wiped off the record. God did this for us, because we were completely unable to do it ourselves.

The analogies that Scripture gives us are analogies, and the fact that several are used indicates that none of them gives us the complete picture. This is obvious when it comes to two analogies that, when taken literally, are contradictory: first, that we are born from above as children of God, and then, that we are adopted.

Both these analogies tell us something important about our salvation. Being born again tells us that there is a radical change in who we are as human beings, a change that begins small and grows in our lives. We are new creations, new people, living in a new age.

Adoption tells us that we were once strangers to the kingdom, but now, by God’s decision, attested by the Holy Spirit, we are declared God’s children, with full rights of inheritance and identity. We who were once far off have been brought near through the saving work of Jesus Christ. In him we die, yet because of him we do not have to die. In him we live, yet it is not we who live, but we are new people, being created by the Spirit of God.

Each metaphor has its value, and each has its weakness. Nothing in the physical or social world can fully convey what God is doing in our lives. But these are the analogies he has given us, and one of the most consistent images that Scripture uses is that we are children of God.

In modern society, mothers play a more prominent role, and many people today have a better relationship with mom than with dad. If the Bible were being written today, maternal metaphors might be more common. But in Bible times, father metaphors were more important.

God sometimes reveals himself with maternal characteristics, but he always calls himself a Father. If our relationship with our dad is good, then the analogy works well. But if our relationship with our dad is bad, then we will have to think harder to see what God is trying to communicate to us. We are not to judge God as no better than the father we know, but to think more creatively, to the idealized parental relationship that no human being ever matches up to. God is better than the best.

As children of God, in what way do we look to God as our Dad?

These are enormous benefits. Perhaps you can think of more. But I am sure that there is nothing better in all the universe than being a child of God. That is the greatest blessing of the kingdom of God. When we become like little children, we become heirs to all the joy and blessings of the eternal kingdom that cannot be shaken.