In part one of this article we discovered that
God created all people of all races in his image and includes all of them in the
saving work of Jesus Christ. According to the Bible, all have sinned, all have
fallen short of the glory of God, and all are recipients of his grace through
his Son.

The Bible does not set out skin color as a
criterion of any kind, regardless of whether a particular people group is
specifically mentioned in the Bible. 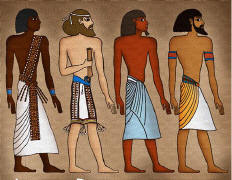 A number of European Bible scholars of the 18th through 20th centuries wrote as
though there were no people of color mentioned in the Scriptures. Others wrote
as though the Bible did mention people of color, but interpreted the biblical
material in such a way as to justify their subjugation and slavery. Although
these unbiblical and ungodly ideas are far less prevalent today, some people of
color still are left with the feeling that the Bible is a “white man’s book.”

This article will review biblical passages in which
black people are very likely mentioned. Again, it does not really matter whether
any particular group of people are singled out for mention in the Bible, because
its focus is on how God worked through the people of Israel to bring about the
salvation of the whole world, of all peoples, through Jesus Christ. Therefore,
the story of the Old Testament is primarily the story of God’s work with Israel.
Other nations and peoples are mentioned only insofar as they play into that
story. The story of the New Testament is primarily the story of the church,
which is ultimately comprised of all peoples from all nations.

The stories of the Bible took place in and around
what we now call the Middle East, and people moved on and off its stage based on
their relationship with the nations of ancient Israel and Judah. Consequently
the vast majority of the world’s ethnic and racial groups are not specifically
identified. But some of those who are identified were black.

There is a strong tradition that some of the
descendants of Noah through his son Ham were black. Ham had a son named
Cush, which means “black” in Hebrew. Cush is the most common term
designating color in reference to persons, people or lands used in the
Bible. It’s used 58 times in the King James Version. The Greek and Latin
word is Ethiopia. In classical literature, Greek and Roman authors
describe Ethiopians as black. Archaeology has found these people to be
black. In the book of Jeremiah, the question is asked, “Can the Ethiopian
change his skin?”

“…black people did, in
fact, have a part in the Bible story. They are mentioned, not because they
were black, but because they were there.”

Genesis 10:6-20 describes the
descendants of Ham as being located in North Africa, Central Africa and in parts
of southern Asia. Psalm 105:23 mentions the “land of Ham” in Egypt, and Psalm
78:51 connects the “tents of Ham” with Egypt.

In Genesis 10, Nimrod, son of
Cush (whose name means “black”), founded a civilization in Mesopotamia. In
Genesis 11, Abraham was from Ur of the Chaldees, a land whose earliest
inhabitants included blacks. The people of the region where Abraham came from
can be proven historically and archaeologically to have been intermixed
racially. So it is possible that Abraham and those who traveled with him could
have been racially mixed.

Genesis 14 tells how Abraham’s
experiences in Canaan and Egypt brought him and his family into areas inhabited
by peoples who were very likely black. Both archaeological evidence and the
account in 1 Chronicles 4 tell us that the land of Canaan was inhabited by the
descendants of Ham.

Further black presence can be
found in the accounts of Hagar the Egyptian, Ishmael and his Egyptian wife, and
Ishmael’s sons, especially Kedar. The Kedarites are mentioned many times in
Isaiah, Jeremiah, Ezekiel and Nehemiah, and the word kedar means
“blackness.”

Still further evidence of black
presence in the patriarchal period appears with Joseph’s experiences in Egypt.
Joseph married an Egyptian woman, Asenath, who was descended from Mizraim, which
made her Hamitic. Thus there is a strong possibility that Asenath was black. She
was the mother of Ephraim and Manasseh.

The New Testament also contains
ample evidence of a black presence. Acts 8 tells the story of the Ethiopian
eunuch, one of the first Gentiles to be baptized. He came from a black region,
so he may have been black. In Acts 13 we read of Simeon, called Niger, the Latin
term for black. There is also Lucias from Cyrene, a geographical location of
black people.

Do these references give us
absolute proof? No. But the weight of evidence indicates that blacks were not
excluded from “Bible action.” Modern scholarly opinion refutes the theologians
who argued against a black presence in the Bible. But sadly, the past
Euro-centrist interpretation of the Bible, which did recognize a black presence
in the Bible, was deliberately used by some in the past to justify the
subjugation and enslavement of peoples of color.

I believe it can be argued that
there is a black presence in the Old and New Testaments. But either way, what is
certain is that the Bible teaches that God has made all people of one ancestry.
All humans—male, female, black, white, red, yellow and brown, are God’s
children. They are all made in the image of God for salvation through Jesus
Christ.

The New Testament makes it clear
that no one is excluded from God’s love and purpose. Paul tells us that there is
“neither Greek nor Jew, slave nor free, male nor female, for you are all one in
Jesus Christ” (Galatians 3:26-29). God’s Word concerns, involves and speaks to
all people inclusively.

We could sum it up in the words
of the popular song:

Red and yellow, black
and white, all are precious in his sight
Jesus loves the little children of the world.•

Author’s note: This two-part
article is based on a paper I wrote while studying at Emory University in
Atlanta. That paper was the product of much research, in the process of which I
amassed a large bibliography. There is not space to include it here. But readers
who would like further details may access the complete bibliography
here.