One of the more enigmatic questions posed by our understanding of the cosmos is “Why is there something instead of nothing?” You might think that is a rather dumb question. However, to many scientists, this is of major importance. Why does matter exist at all, and—since it does—where did it come from?

The first words of the Bible inform us that God created the heavens and the earth. This fundamental revelation is what guided the children of Israel away from the false gods they had worshipped in Egypt, and turned them towards the true Lord of Creation. Through prophetic revelation God taught these people, in language they could understand, foundational truths about his own identity and the nature of his relationship to all creation.

Genesis was not intended to be the last word about the intricacies of exactly how the various parts of the cosmos work together. Using what we call scientific methods and tools we know much more about the details of the inner workings of creation than those ancient people did. However, the biblical revelation has not been superseded as a first word and starting place for researching the nature of creation. The biblical word provides us theological/philosophical presuppositions upon which we can build our scientific research of creation which science cannot provide itself.

Many scientists scoff at the biblical and Christian answer as to why there is a cosmos at all, considering it science fiction —with the emphasis on fiction. I enjoy good science fiction. For me, some of the most enjoyable of this genre comes from the Star Trek series. Captains, Kirk, Picard and Janeway tackled all kinds of social and moral issues with a backdrop of all kinds of imaginative devices to beam them from one place to another, travel at warp speed, eat and drink items synthesized from a machine, and explore all kinds of life forms. What makes Star Trek so good is that it has a real basis in science. You can read about it in a book entitled The Physics of Star Trek by a theoretical physicist, Lawrence M. Krauss.

Krauss has written another book entitled A Universe from Nothing: Why There is Something Rather Than Nothing. Dr. Krauss is one of several scientists who try to prove that every particle and force sprang into being “from nothing,” but without God being part of that process. To reach this conclusion, Dr. Krauss explains that there are three kinds of nothingness.

The first kind of nothingness is a concept we inherit from Greek observation and thought—the nothingness of empty space. This kind of nothingness is not really “nothingness” because we know that so-called “empty” space is teeming with energy and particles. These are the features of creation that we currently have the ability to investigate, but it has been estimated to comprise only 6% of what is there. It seems that the other 94% of space is filled with what we call dark matter and dark energy. These aspects of the universe are, so far, beyond the reach of our physical senses and the instruments we have made to enhance them. So we can’t explain exactly what they are and how they work. But we know something else is there since what we can detect is being affected by things other than what we can now detect.

Krauss describes a second kind of nothingness as the “nothing without space and time.” His conjecture is that whole universes bubble up out of this kind of nothingness. Each bubble has its own space-time and simply pops into existence. But even if this is true, Krauss notes, we still have to ask, where did the bubbling something come from?
A third kind of nothingness is a more profound nothingness in which even the laws of physics are absent. Krauss attempts to explain how this happens by saying that an infinite assembly of universes exists in this nothingness. It’s called the multiverse and each universe in it has its own randomly determined rules, particles and forces. This, for Krauss is where the story ends—or should we say, begins.

But does it? Once again, if such a third kind of nothingness contains an infinite assembly, we must still ask, “Where did that infinite assembly come from?” And furthermore we can ask, just how the idea of multiverses amounts to a scientific claim at all? What empirical research has provided any evidence that this is the case? Indeed, could this assertion ever be verified scientifically at all? 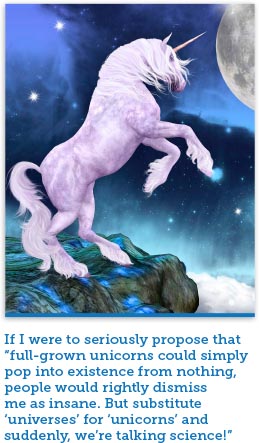 Science fiction author Theodore Beale has pointed out the fatal problem with Dr. Krauss’ ideas. Being a bit facetious, Beale says: “There is, of course, a fourth type of nothingness. And that is the amount of scientific validity contained in Krauss’s desperate attempt to use a fraudulent veneer of science to avoid the obvious conclusions driven by the relevant philosophic logic. This isn’t even science fiction, it’s just purely evasive fantasy. If I were to seriously propose that full-grown unicorns, little rainbow-colored horned equines, could simply pop into existence, like bubbles in boiling water, ex nihilo, people would rightly dismiss me as a fantasist and a possibly insane one at that. But substitute ‘universes’ for ‘unicorns’ [as Krauss has done], and suddenly, we’re talking science!”

Krauss’s position, as Beale notes, is not the result of scientific experiment, but rather a pure philosophical speculation. And it certainly doesn’t explain why there is something rather than nothing. His view amounts to saying that there has always been something of some sort. The universe we currently know came from other stuff that simply existed in a different form. There are just multiple forms of cosmic existence.

The biblical and Christian answer as to why there is something rather than nothing is entirely different. Its answer is theological and is based on a particular revelation granted to the ancient Hebrew people through particular persons, and preserved for us in Scripture.

In continuity with the revelation of Genesis the author of the New Testament book of Hebrews (11:3) tells us “By faith we understand that the worlds were framed by the word of God, so that the things which are seen were not made of things which are visible.” Theologians refer to this as “creation ex nihilo (from nothing).” What is meant by the word translated here “worlds” and other biblical words such as “heaven and earth” the “cosmos,” the “universe” or “creation”? The biblical writers are referring to all that is, that is not God. Thus they would include “bubbles” “multiverses” and anything else either actually existing or hypothesized by cosmologists.

What is meant by “from nothing” in this theological statement? It means that prior to the moment of creation, there was nothing except God, not even space or time (or multiverses!). In other words, God didn’t make the universe from anything eternally preexisting—there was nothing at all pre-existing along with God before God created. So when speaking of Creation in a way consistent with divine revelation, we mean all that has ever and will ever exist that is not God and in any and every form, whether discovered by scientific research or imagined by philosophers or fiction writers.

There was a time when the cosmos was not, when there was only God and nothing else in any form. Creation has not existed eternally along with God. God does not exist alongside or within the time and space of any universe or multiverse. Time and space (and multiverses, if there were such) are created things that came into being by the agency and act of God. Unlike everything else that ever existed in any form, there was never “a time” when God was not.

So the Christian answer is neither that the cosmos existed eternally (along with God and so always was) nor that the cosmos was generated by nothing. God gave existence itself to that which has ever existed and in fact he continues to hold everything in existence. If God forgot about the universe even for a nanosecond all that is not God would cease to exist!
This revelation means also that creation is not an extension or emanation or a part of God. The cosmos is not divine and God is not created or made. Creation and its entire history is dependent upon God even for its existence. Creation is neither self-existent nor eternal or divine. God, however, is no way dependent upon creation. Only God has eternal self-existence, what theologians have called down through the ages, God’s aseity. There never was a time when God was not. God is not a created or made thing. So the biblical revelation, from the Old Testament through to the New, informs us as to why there is a universe, a cosmos, at all. It does not exist on its own but exists because of the agency and act of God. Now there’s an answer to the question!

We have made, and continue to make, astounding discoveries that are increasing our understanding of the cosmos and its history. But those working at the leading edges of the experimental spectrum—the very big and the very small—admit that they still may be just beginning. Each breakthrough seems to open up new phenomena to investigate. In describing their work, quantum physicists find they must resort to language that is more metaphysical than scientific. Some admit that, scientifically, there may be a limit to “knowability.” And it is widely admitted, especially by philosophers of science, that the entire scientific enterprise is based on philosophical (or theological) assumptions that the scientific method itself cannot provide.

That is why those first words of Genesis should be taken seriously. God told us something we cannot discover for ourselves, and cannot disprove. Why is there something rather than nothing? Because, in the beginning, God created the heavens and the earth, making a cosmos that we can touch, feel and measure—all out of, well, nothing.