They left Jerusalem and Judea because of continuing threats on the life of Jesus. Now the small group was in the region of Perea, close to Jericho. But even here they could not get away from death. The news came by a messenger: “Lazarus is sick, and near death.” Lazarus and his sisters, Martha and Mary, lived in Bethany of Judea, just east of Jerusalem. For many of the
disciples, it seemed foolish to even think of going into such a dangerous area.

Jesus waited two days before announcing that they would go back to Judea. He spoke, as he often did, in figurative language: “Our friend Lazarus is asleep, and I am going to wake him up.” As often happened, the disciples tried to understand Jesus’ words literally. Jesus then explained, “Lazarus is dead.” Thomas, not known for his cheerful and positive outlook on life, responded, “Great, let’s go back into Judea and we can all die with him.”

They didn’t talk much as they walked to Bethany. Their hearts were heavy. They reluctantly followed Jesus into Judea. Jesus did not reassure them that nothing would go wrong. In fact, he knew that he was in the last few days of his own life.

Hearing that Jesus was coming, Martha left her sister, Mary, to continue preparing food while she went out to meet Jesus as he neared Bethany. Grief-stricken, and still in shock at what had happened, Martha shared her burden with Jesus: “If you had been here, Lazarus would still be alive. But maybe you can still do something. I know God will give you whatever you ask.”

Jesus looked into Martha’s eyes and said, “Your brother will be resurrected.” Martha believed that there would be a future resurrection to life. She had heard Jesus speak of it, and felt that he was comforting her now. “I know, Jesus. I know that he will be resurrected at the last day.”

This was the setting for the words Jesus now spoke: Words of comfort that Christians hear at funerals, as corpses await burial. Words that have been preached from tens of thousands of pulpits. Words that millions have memorized. John records them. “I am the resurrection and the life. He who believes in me will live, even though he dies: and whoever lives and believes in me will never die” (John 11:25-26).

Jesus did not preach these words at a gravesite, or in an open-air stadium at an evangelistic rally. It was a one-to-one conversation with Martha. He looked at her and explained: “I am life. Life is me. The resurrection—it’s me.” 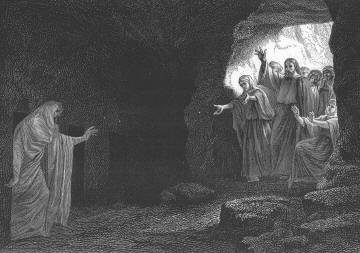 Here is the gospel. God, in the person of Jesus, came to die that we might live. Jesus was and is God. The second Person of the triune Godhead came in the flesh, lived among us and went to the cross for our salvation.

We struggle with sin. We are helpless in the face of sickness and death. We are captives of time and space, knowing that death will have its way with each of us. We know that our own sin, our sinful condition, sentences us to death. It is inevitable. Each of us, on our own death row, awaits our date with death.

But there is good news. We can be pardoned. We can be rescued from our hopeless condition and the sentence of death. God came from outside of time and space, and entered into it. He came from immortality to mortality. He took a body of flesh and empowered that body with his divinity. To rescue us. To save us. Do you believe?

Martha affirmed a statement of faith remarkably similar to the one voiced by Peter at an earlier time. Jesus had also pressed Peter to make a commitment (Matthew 16:13-16). He asked Peter, “Who am I, Peter?”

Neither Martha nor Peter said anything about what a good example Jesus was. They did not explain that Jesus was a respected teacher of values and ethics. They said nothing about Jesus’ prophecies, nor did they speak of his healings. They both affirmed that he was and is the Christ, the Son of God.

Both Peter and Martha knew about Jesus. They had spent time with him, and they had observed him. They watched him and came to know much about him. But Jesus eventually pressed them for a more intimate and lasting commitment. Jesus Christ wanted to know if they believed. He wants nothing less from us. Do you believe?

Perhaps the Jesus you know is a Jesus you know about. You may know about his life and his teachings. You may know his parables. You may have studied what he said about the future. You may be interested in the date of his second coming. Perhaps you have been taught that he came to set us an example, and if you can only do what he did, then you will be good enough to be given salvation.

But, do you believe that Jesus Christ is the Son of God, the only source of life? Does that belief change your life?

You know how the story of Jesus, Mary, Martha and Lazarus ends. After Jesus’ conversation with Martha, Mary also left the house to see Jesus. She also told him that if he had been there, surely he wouldn’t have let Lazarus die.

Death and grieving were everywhere. Mary and Martha were in tears, their friends were weeping. It was the custom to hire mourners, who wailed and shrieked in the background. The air was heavy with hopelessness. Life was in their midst in the person of Jesus, but death controlled and ruled their attitudes.

Jesus Christ knew that he, too, would soon meet death— and overcome it. He knew that through his own death and resurrection, he would solve the problem for everyone else. He would claim victory for all who would believe in him.

When he came to the tomb and asked them to take away the stone that sealed it, they thought he wanted to see the body. Martha protested: “But he has been dead four days. The body is decomposing and it stinks horribly.’”

The command of Jesus, “Lazarus, come forth!” is high drama. We can almost hear the wailing stop, we can almost see the faces as they peer intently into the face of death. Life was commanding the tomb of death to give up its hold on the dead.

A call to new life

Jesus calls us to the same new life, from our own spiritual bondage and decay. But before we can have the new life in Christ, the gravestone must be rolled away. We must be willing to look into the jaws of death. We must confront the chains, addictions and beliefs that bind us and come forth.

As he called Lazarus to new life, Jesus sealed his own death warrant. On another day, not many days later, Jesus again took on the forces of death and sin, and overcame them once and for all. He triumphed on the cross, that we may have life. Three days later, he came out of a tomb – but he was raised not just to physical life, as Lazarus was, but to eternal life and a supernatural body.

He showed that he was God in the flesh by rising from the dead. It was the sign he gave to prove that he is Messiah, Redeemer and Lord. He triumphed over death and the grave.