In America’s worst natural disaster, nearly a million people were displaced by Hurricane Katrina. Tens of thousands were stranded without power, without food, without drinkable water, without sanitation, without medical services, without police. More than a thousand died.

One tragedy piled on top of another to make them all worse. If only the city had been built in a better place. If only the people had built better levees. If only they had evacuated before the hurricane hit. If only the government had acted quicker to bring food and water, and to transport the refugees. If only… 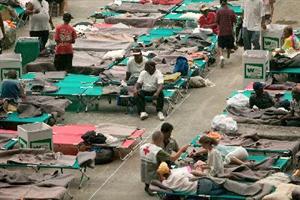 All sorts of human decisions contributed to the tragedy, but it was nevertheless a natural disaster — nature gone awry — an “act of God.” Where was God when the hurricane hit land? Where was he when the levee broke? Where was he when people were trapped inside their attics when the water rose too high?

God was there, on the ground, in his people, suffering along with them. When one part of the body suffers, Paul said, every part suffers with it (1 Corinthians 12:26) — and that includes the head of the body, Jesus Christ. He suffers with us — he has proven his willingness to do it before, and he does it time and time again. God loves his people — he loves even the people who do not believe in him — he loves them enough to send his Son to die for them. When we grieve, he grieves, too. When we suffer, he suffers, too.

God is big enough and powerful enough to do something about it. Sometimes he intervenes, and we hear stories of miraculous intervention — but often we do not. Maybe the hurricane could have hit harder and stronger than it did, but still, it killed many people. God could have stopped it entirely, so that it didn’t kill any people at all, didn’t cause any property damage at all,
and yet he did not.

Whether the disasters are small or large, why does God let them happen? Frankly, we do not know the complete answer. The Bible does tell us that when sin entered the world, God said that nature itself would work against the people. “Cursed is the ground because of you…. It will produce thorns and thistles…until you return to the ground” (Genesis 3:17-19). When the first people sinned, nature itself went awry — and nature will win over every person, and every person will return to the dust from which they came (v. 19). Old age will strike — unless something else does first — and nature will have its say.

Paul says that creation itself “was subjected to frustration” (Romans 8:20), and it waits for the day when it “will be liberated from its bondage to decay and brought into the glorious freedom” (v. 21). Frankly, we do not know how physics would function without “decay” of some sort, and we do not know how God will fix the problem. But we do know that there is something wrong with nature, caused by sin, and God had chosen to allow that — even with the difficulties it causes, even though those “difficulties” are sometimes huge disasters that kill thousands of innocent people. Sin often affects innocent people, and sin has somehow affected nature itself.

We may pray for the day when “the times comes for God to restore everything” (Acts 3:21), but we still have to live in the world gone awry.

Jesus saved his disciples from a natural disaster — the storm on the sea of Galilee. He saved Paul and his companions on a storm-caused shipwreck near Malta. But nature still had its way, for they all eventually died. Many were killed by evil people, others by disease (another example of nature gone awry), some by old age. God allows nature to take its toll. Not forever, not permanently, but God still lets it happen. Someday, I suppose, we will see how magnificent the plan is, but for now it seems quite messy.

Jesus talked about a natural disaster in one man’s life. Who sinned, the disciples asked: this man, or his parents? Neither one, said Jesus (John 9:1-3). Not all problems can be pinpointed to a particular sin. It’s just that nature doesn’t always work the way it is supposed to, and for this particular man, the result was a disaster in his own life. Jesus fixed that particular problem, but most of the time, he allows his people to suffer the consequences of a world messed up by sin, where even the forces of nature work against us.

Jesus talked about another disaster in Jerusalem: the tower of Siloam fell and killed 18 people. It was not a natural disaster, but a disaster nonetheless, a tragedy that killed innocent people. Jesus did not spend time blaming the engineers or the builders. Instead, he turned to the audience and said, “Unless you repent, you too will all perish” (Luke 13:4-5). Take that disaster, and instead of blaming somebody, examine yourself. Get your priorities in order, and the chief priority is your relationship with God.

During his tremendous trial, Job said, “Though he slay me, yet will I hope in him” (Job 13:15). We need a similar kind of trust — knowing that the God who did not spare his own Son will never cut us off, though we walk into the valley of the shadow of death, though we enter death itself. The God who spared not his own Son also rescued his Son after he went through that valley, and he promises to rescue us, too. He will give us life again, but to do it, we live in a world that takes life away.

If Jesus were talking to the families of the 18 people killed by the tower collapse, he no doubt would have been as compassionate as he was with the man born blind. When we are dealing with the victims of a disaster, we need compassion, too — compassion that motivates us to help. Many have given generously, and no doubt will continue to help as more disasters strike this planet.

But we also need to examine ourselves. When tragedy strikes someone else, we do not need to ask where God is — we need to ask where we are, and whether we can do something about it. The only thing worse than nature gone awry is a heart gone cold.

Can we trust God even when nature strikes us dead? Yes, we should, for one way or another, nature will strike every one of us dead. We have nowhere else to turn, for God has the only solution to the problem. But we need to trust him.