Part of the controversy surrounding the movie The Passion of the Christ is whether the film is anti-Semitic. Does it blame the Jews for the death of Jesus? Here’s a related question: Whether or not the film blames the Jews, are they to blame?

I can understand why Jews might be concerned about it. Christians have often persecuted Jews for being “Christ-killers.” This goes far beyond name-calling—it has included economic penalties, violence and even murder, in the name of taking revenge for the death of Jesus.

Many Jews were killed in the Crusades, and much more recently, millions were killed in 20th century Europe—and the Nazis were not the only ones who persecuted Jews. The Nazis can hardly be called Christian, but the attitude that fueled their hatred was nurtured by centuries of anti-Jewish teaching in the European churches.

Many Christians have been troubled by the Jews’ persistent rejection of the Christian message. Historically, perhaps due to some insecurity in their own beliefs, some have wanted to use force to achieve social conformity. Some people apparently felt that the easiest way to get rid of the problem was to kill the Jews, especially those who refused to accept Christianity (but sometimes even Christian Jews were persecuted).

I am ashamed of what some people have done, supposedly in the name of Christ. But I do not want to let my shame distort my view of what actually happened. So let’s talk about it: Is Mel Gibson’s movie anti-Semitic, did the Jews kill Jesus, and what attitude should Christians have toward the Jewish people?

Comments on the movie

I was privileged to see an early screening of the movie, when Mission America invited numerous denominational leaders to view a preliminary version in December. So I was able to have my own impression as I saw the controversy aired in the news media. The controversy has certainly given the film a huge amount of free publicity, and this may cause some non-Christians to see it, although the majority of the viewers seem to be committed Christians already.

Mel Gibson met with the Mission America group to answer questions, and he commented on the accusations of anti-Semitism, saying in effect that the problem that people have with the film is not really with the film—it is with the Gospels, for the film simply portrays what the Gospels report (there is little controversy about the nonbiblical parts that Gibson added to the film, such as the story line for Mary Magdalene, Pilate’s wife and Simon of Cyrene).

I must agree with Gibson on that point—the film did not create a problem, but simply portrayed (in a visually stunning and memorable way) the story contained in the Gospels. Because of Gibson’s theology, it dwells on the scourging longer than the Gospels do, but what it portrays was historically probable. (Catholics tend to focus more on the suffering and crucifixion, and Protestants more on the resurrection, but both are included in the story.)

If anything, I think that the film, as compared to the Gospel accounts, decreased the role of the Jews. Whereas the Gospels repeatedly refer to “the Jews,” “the Pharisees,” “the Sadducees,” etc., the film deleted most of those references as unnecessary. (In the recent film on The Gospel of John,these repeated references were retained, since that film was committed to including all the NIV text.)

In Gibson’s film, the group of people who arrested Jesus, who interrogated him and asked Pilate to crucify him, are barely identified as Jews. (The only person explicitly called a Jew is Simon of Cyrene.) If a person did not know the story already, he or she might even wonder who those people in the elaborate costumes were. The blame must also fall on Pilate, who as governor had the responsibility to prevent such miscarriages of justice but did not have the courage to do so.

Gibson even removed from his film the line from Matthew 27:25, where the crowd of Jewish people said, “Let his blood be on us and on our children!” This verse in particular has been used numerous times to justify anti-Semitism, so Gibson was willing to remove its English subtitle (it was retained in Aramaic), since it was not necessary for the story line.

What do the Gospels portray?

Do the Gospels themselves blame the Jews for the death of Jesus? Yes, and no. 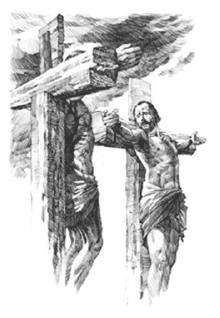 Historically, yes, Jews were there, and they wanted Jesus, himself a Jew, dead. Jesus was seen as a threat to national security, a popular teacher who might provoke a rebellion against Rome and cause many to be killed. John 11:47-50 gives this reason for the crucifixion, and it makes good historical sense. So certain Jewish leaders arranged for a rigged trial and demanded that Pilate execute Jesus.

John repeatedly calls these people “the Jews,” but that is simply his shorthand for the Jewish leaders who opposed Jesus. They were official representatives of the Jewish people. Josephus uses the word in a similar way to refer to certain powerful leaders, not the entire ethnic group, not all, or even most, Jews. John does not mean to blame all Jews everywhere for what some few of them did in Jerusalem.

John was quite aware that influential supporters of Jesus such as Nicodemus and Joseph of Arimathea were Jews, that the disciples were Jews, and that many Jews looked on Jesus favorably even without being totally committed to him. John clearly points out, “Salvation is from the Jews” (John 4:22). The Gospels are plain that Roman leaders, particularly Pilate, authorized and carried out the actual crucifixion. They had the responsibility of preventing innocent people from being hurt, and yet they knowingly caused an innocent man to be tortured and killed. They must share the blame. Both religion and state were involved.

Jews and Gentiles alike are guilty—indeed, all people are just as guilty. Jesus came for the very purpose of being killed by his own people. Had he not, none of us would have a Savior. What happened was God’s design, according to God’s purpose, for the salvation of Jews and Gentiles alike. What sense does it make to blame or hate anyone for doing the very thing that God intended be done so that he might demonstrate once and for all his boundless love for humanity?

If we had been there, if we had been the high priest or his supporters, we would have done the same thing. The Jewish and Roman leaders were acting not just as representatives of two ethnic groups, but as representatives of all humanity. We all needed the death and resurrection of Jesus, and every ethnic group has been involved in equally unjust killings and murder of innocent people. God does not hate the Jews or the Romans—he loves them—just as he loves all humanity, which is why he came to us humans as our sacrificial Lamb.

The Jewish crowd did accept responsibility for the death of Jesus (Matthew 27:25), but there is no reason for us to accept the validity of their claim. They never had the authority to condemn their own children, and we must not act as if they did. Let us remember that Jesus said, “Father, forgive them, for they do not know what they are doing” (Luke 23:34)—and that statement applies to the Jews just as much as it does to the Romans (in Gibson’s film, even the thief on the cross recognizes that). The message of Christ is not one of blame or revenge—it is one of forgiveness and redemption.

God’s attitude toward the Jews

God selected the nation of Israel to be his people. He adopted them as his child (or to use another metaphor, his bride) and promised to be their God (which implies that he would protect, provide for and guide them). He made a covenant with them, solemnizing his promises to them. But the people repeatedly broke the covenant, and God even divorced the northern tribes, calling them “not my people.” They had become like Gentiles to him. And God knew they would from the beginning (Deuteronomy 31:20).

But God would not change; his love and his faithfulness to his word for them will never diminish (Romans 11). God continued to love his chosen people even after they were exiled to Babylon. In his love he called a remnant back to Judea. From that remnant would come the Messiah, the Christ, who would redeem his people and the whole world.

When the new covenant came, the old covenant ended in the fulfillment of the promise of God with his people. But God’s love for Israel will never come to an end (Romans 11:1). God is faithful even when people are not. In his faithfulness to Israel, God demonstrates his faithfulness to all humanity (verse 26).

Christians should love the Jews and want them to be saved, just as Paul did (Romans 10:1). Our desire for the Jewish people is that they become Christians, not that they cease being Jewish. Although the Israeli Supreme Court may see a contradiction between those two terms, we do not. Like all people, Jews are to be won through love, through kindness, not persecution.

Salvation is from the Jews, but it is not from Judaism. Salvation is from Jesus, the Son, a Jew whom God sent to Jews for the sake of Jews and Gentiles alike. The Jews are not Christ-killers any more than we all are. We have all been enemies of God.

The extent of his love

I pray that no one uses Gibson’s film to justify anti-Jewish attitudes. That would be a distortion of the film, a distortion of the Gospels, and an un-Christian thing to do. The film makes it clear that Jesus knew what he was getting into (he had probably seen other people beaten and crucified), and yet he did it anyway, because he loved us. If you see the film, I ask that you remember it not for the graphic blood and violence, for its dealing with evil’s attack on God, but for the reminder of Jesus’ love for us.

Simon of Cyrene was different—he did not know what he was getting into when he walked into Jerusalem that day. Mark 15:21 calls him “the father of Alexander and Rufus”—two men who were known to Mark’s readers, probably because they had become Christians. Simon himself is likely to have become a Christian, and thus he carried the cross of Christ in a spiritual sense as well.

Perhaps we are all a little like Simon. Did you know what you were getting into? Are you willing to carry the cross of Christ? That’s something worth thinking about.