I grew up on a farm, so I know something about animals—great and small. Animals are still part of my life. Our home is surrounded by bird and squirrel feeders. There’s also a birdbath where on hot dry summer days the little critters sometimes have to wait in line for a drink. I own a horse. He doesn’t get ridden much, but I scratch his back and feed him tidbits anyway. I love animals. 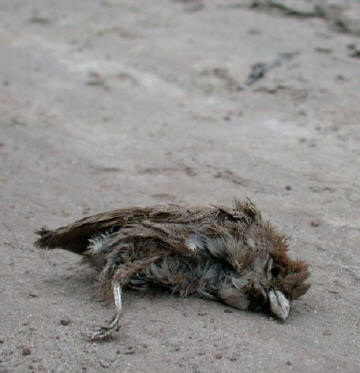 Not long ago while we were helping a daughter move, I noticed through the window a couple of birds flopping around in the street. They seemed to be fighting. Then one bird flew off, but the other continued rolling around unable to get up. When I investigated, I saw the poor creature was injured. It couldn’t fly; it couldn’t even walk. Its back was raw and bleeding from where other birds had been pecking it. I knew what had to be done, but I didn’t have the stomach for it.

When I returned a little later to see how the bird was doing, my heart ached. It didn’t move at all now. It was dying—slowly and painfully. I looked into the sky and asked God for strength. He gave it.

As I recalled the scripture that says God sees every sparrow that falls, I thought about life and death. Death, as far as this physical flesh is concerned, is so final, whether for a little creature or a human. This led to thoughts about the difference between life in the flesh and life in the spirit, the life that isn’t subject to the death of the body. I thought about Paul’s words to the Romans about being dead to sin but alive in Christ. Would that we were as dead to sin as we are dead in body when this physical life is over.

When I was baptized, I realized I would occasionally slip into sin, but nothing too serious. You know, maybe pass along gossip or tell a little white lie or yell at my husband or kids. God doesn’t categorize sin the way we humans do, so this was how I was thinking. After all, I was now dead to sin. Imagine my chagrin when I found myself tempted beyond my ability to resist—at least beyond what I thought I could resist or wanted to resist. Without going into any deep dark secrets, more than once in my Christian life, I’ve had to prostrate myself before my Savior and desperately plead for help in either getting myself out of a horribly sinful situation or avoiding one.

And yes, the words of the apostle were ringing in my ears. “We died to sin; how can we live in it any longer? Or don’t you know that all of us who were baptized into Christ Jesus were baptized into his death? We were therefore buried with him through baptism into death in order that, just as Christ was raised from the dead through the glory of the Father, we too may live a new life” (Romans 6:2-4).

God has shown me, sometimes the hard way, that there’s more to the Christian’s new life than sauntering along life’s path with a knowing smile on my face that I’ve got it made. So what in the world was the apostle talking about?

To delve deeply into Paul’s theology would take much longer than space allows. Many books have been written on “just what did you mean, Apostle Paul?” Briefly, many scholars feel there was an “already—not yet” aspect to Paul’s conception of salvation. As Professor James D.G. Dunn writes: “Believers are ‘in Adam’ and continue to be ‘in Adam’; they have not yet died. But they are also ‘in Christ,’ and have begun to experience life, though they have yet to share in the full experience of Christ’s resurrection—in the resurrection of the body” (The Theology of Paul the Apostle, p. 464).

Note the before-and-after characteristics of these passages. Paul writes: “If we have been united with him like this in his death, we will certainly also be united with him in his resurrection. For we know that our old self was crucified with him so that the body of sin might be done away with, that we should no longer be slaves to sin—because anyone who has died has been freed from sin. Now if we died with Christ, we believe that we will also live with him” (verses 5-8).

Paul taught salvation by grace through faith in Jesus Christ. To some Christians and non-Christians of his time, his teaching of salvation by grace was thought to encourage sin, to teach that all was now lawful. No, Paul said, in baptism a person dies to sin. But then a person lives to Christ. For Christians, there’s an obedience to Christ that goes far beyond keeping the letter of the law.

What does Christ require? What are his standards of righteousness? One has only to read the Sermon on the Mount in Matthew 5 to realize how desperately we humans fall short and need his grace.

Paul writes that as a Christian I’m to live as if I’m dead to sin. Will I sin? Oh, yes. As much as I hate to admit it, I’ll still be spending time on my knees, confessing my sins and thanking my Savior for his forgiveness, mercy and grace.

I had mercy on that poor bird’s physical suffering, but my suffering, and yours, the suffering of sin, God took on himself in our place and then raised us up to new life in the spirit with him. In spite of my personal weaknesses, I know I’ve left the “before” of living in sin and I’m in the “after” of living to God in Christ Jesus. “The death he died, he died to sin once for all; but the life he lives, he lives to God. In the same way, count yourselves dead to sin but alive to God in Christ Jesus” (verses 10-11). •

Sheila Graham is a freelance writer and speaker on religious topics, including the role of women in the church, women of the Bible, the family, the environment and other Christian-related subjects. She holds degrees in religion from Azusa Pacific University’s Haggard School of Theology and from Claremont Graduate University.