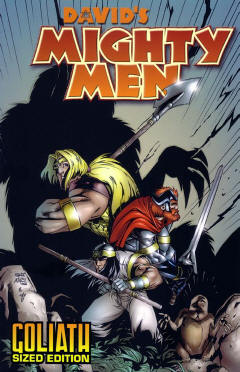 I have been a professional comic-book illustrator for over 20 years. I started with DC comics in 1983. The work was sporadic at first, so I kept my day jobs. In 1986, I was offered an in-house job with Marvel Comics in their production department. That’s when things began to get serious for me. It didn’t pay much and I wasn’t doing the kind of work I wanted, but I was “in.”

That experience still holds many fond memories for me. Editors began taking an interest in my work and started offering me real freelance work. Since then I have had the opportunity to work on numerous projects for many well-established companies. You may have seen my work in, say, Spiderman comics. About the same time that my comics career started, I also began my Christian career, back in 1984.

My ambition is to combine my talent as a storyteller and illustrator with my desire to share God’s word, and make the comic book a useful vehicle for spreading the gospel message. Don’t underestimate comics. They are an art form, and can inspire us just like music, art or poetry. The comic book is ingenious in its simplicity; pictures combined with words to convey ideas. That is why children gravitate to comics. Whenever they might get stuck on the words, they have the pictures to help them. And did you realize that comics are the most read form of literature in the world? That fact alone should make us consider them a serious means of communication. A comic book, like any book, is a tool to communicate ideas. And like any tool, it can be used to break or build.

When the concept of “superhero” comics first appeared, the heroes were always represented as individuals with great moral fortitude. They had a great sense of “right” and “wrong.” They sacrificed to defend what was “right” at all costs. That’s what made them “superheroes.”

They also had special abilities and neat gadgets to get the job done. I believe that’s what struck a chord in the readers; a fantasy world where we could escape to where we could right wrongs if only we had those special abilities or gadgets. We want to believe people will do the “right” thing. Unfortunately, we’re ordinary people with shortcomings. Individuals, communities and governments will let us down. I believe that inner frustration leads us to feel we should take matters into our own hands. We become more like vigilantes than “superheroes.”

Art imitates life, and so now you have the “vigilante-hero.” “Consequences be damned, you’ll come around to my way of thinking or else!” No due process. Unfortunately again, this resonates with us because we are frustrated with our society. But vigilantism is wrong. We have all these “heroes” dispensing their judgment on us instead of defending what is “right.”

When the idea of creating a Christian-based comic first came to me, I thought I was the first. “What an ingenious man I am to have this spectacular idea!” Oh boy, pride really does come before the fall. As I shared the idea with others, I quickly learned that there are literally hundreds of fine individuals working to make Christian comics a reality: Jack Chick and Nate Butler, just to name a couple. I decided to join in.

As I researched the possibilities, I came across a little studio, Community Comics, a small group of individuals who were working toward the same goals I had. What really impressed me was the quality of the work they were producing. I say in all humility that Sherwin Schwartzrock, Ben Avery, and Bud Rogers are incredible professionals in what they do and fine examples of what it means to be a Christian.

Community Comics are just one studio among many trying to do this work. We share stories of encouragement and even our discouragement by phone and e-mail. It is an interesting group of people to be involved with, and I am spiritually richer for being a part of it.

My first Christian comic, David’s Mighty Men, is very personal for me. As much as I enjoy my regular work, and I do, it’s still work. It is how I make my living. David’s Mighty Men goes a few steps deeper for me. I love the Old Testament stories, especially the stories of David. I remember when I first learned of David’s mighty men in a sermon. As soon as the preacher mentioned them, my face lit up and I thought, “What a great title for a comic. Superheroes straight out of the Bible!” So I began to develop the idea of a Christian-based comic book.

The reviews on David’s Mighty Men have been extremely positive. We artists are always happy when our work is well received. I’ve had reviews from secular and Christian sources. They understand the comic has a Christian worldview, but they also feel it is done without offence to personal sensibilities. Bottom line, they feel it was a fun and entertaining read. That’s exactly what I am aiming for. I want kids to understand how “cool” God is. They say you can catch more flies with honey than with vinegar. I like this “sweet approach” because it demonstrates God’s tenderness.

David’s Mighty Men is selling slowly but surely, which is encouraging. I have only produced this one graphic novel with Community Comics so far, but I am hoping to do more. I have many more stories running through my head that I would love to get on paper. I go to various comic conventions and greet the fans of my secular projects, like Spiderman. But it is always a special treat when someone comes up and tells me they’ve read David’s Mighty Men and how much they’ve enjoyed it.

I have learned very quickly that drawing the comic is merely the tip of the iceberg as far as getting it into the hands of the public. There is also marketing, advertising and promotion. You can have the greatest idea in the world, but what good is it if people don’t even know it exists? That’s one big obstacle many of us face in this business of Christian comics. We have to convince investors that this is a viable product.

Many parents feel that most of the comics out there are too mature for their 8-year-old. We have to gain their trust and prove to them we are capable of producing a family-friendly product (what is now being dubbed an “all-ages” comic).

As for the future, I would love to do more about David’s Mighty Men. I have come to love those guys. It’s as though they have taken on a life of their own and they are crying out to me to tell their stories. I have one other project bouncing around in my head called “Secret Agents.” It is like Highway to Heaven with an attitude. It’s about a group of angels and how they will help believers in the end times. This is going to rock. •