When Hurricane Katrina inundated New Orleans, we all watched in disbelief as a major U.S. city suffered one of the worst natural disasters this nation has ever experienced. A disaster like this gives the whole country an adrenaline rush. All our emotions are thrown into sharp relief—anger, fear, frustration, but also courage, compassion and generosity. As the networks arrived to bring the misery into our living rooms, we opened our hearts, along with our wallets and purses, to help the victims. Then, once the vast resources of America swung into action to bring the situation under control, the cameras moved on.

The restless media diverted our attention to new crises, to other traumatic scenes of dramatic rescues and stories of courage and sacrifice. The trauma in the Gulf moved to our emotional back burners. Unless you lived there.

Six months later, thousands of people still needed help. Gerry Trennepohl, an associate pastor and biblical counselor, spent a week working with a group from his congregation, helping to rebuild the homes and lives of people in the Gulf. Here is his report. 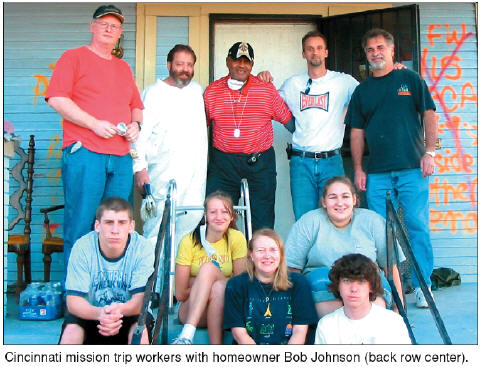 We left Cincinnati on Christmas Day in five vans, one pulling a trailer loaded with equipment. After overnighting in Nashville, we arrived the next day at Tickfaw, about 50 miles north of New Orleans. This was to be our base.

We were joining 70 people from nine congregations to bring physical and spiritual help to our fellow Christians.

He explained the difficulty in communication after the storm. It was hard to imagine: no cell phone, no landline phone, no e-mail or Internet access, no newspapers, radio, television—all the means of communication we take for granted had gone.

How hopeless and alone the people must have felt. Their homes were not inhabitable, their familiar streets were strewn with debris and deserted, and their neighborhoods were destroyed. It was eerie—no people, no lights, no signs of normal life. An area larger than Great Britain had been devastated.

We’ve seen pictures of this kind of disaster in the developing world, but it just doesn’t happen in the United States. But it had, and our fellow Christians needed help.

The city of New Orleans and much of the surrounding area is below sea level. It can normally keep its head above water through the massive pumping system. But when the 17th Street canal broke its banks, the operators were evacuated and were unable to return to the city to keep the pumps running. Some homes remained flooded for up to six weeks.

When the water finally receded, it left a covering of mud six inches deep. In the typical house, furniture, fixtures and walls were ruined. So the first step was to remove the mud—a process affectionately called a “mud out.”

Then the contents of the home had to be removed and examined to see what, if anything, was salvageable. Sheet rock, baseboards, molding and everything down to the wooden stud walls had to be torn out and a disinfectant applied to remove mold.

Only then could the process of installing the electrical, plumbing, cabinets and drywall begin. That is, if the house was salvageable. Many were not. 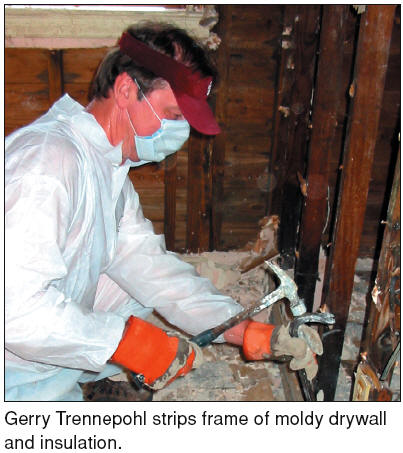 Pastor Mike directed the crews, since he knew the people and their needs. In any mission activity, the people “on the ground” are in the best position to know who and how to help. We were coming in to serve as the hands and feet of Jesus, showing concern and care. It added a spiritual dynamic to an otherwise exhausting physical event.

As we worked, the overall atmosphere of loss and trauma began to affect us. Television pictures can’t convey that. You have to see it in person and talk and work with the people directly affected. At times, even we, the encouragers, needed to be encouraged.

The local people tried to show a positive attitude. As Christians, they knew God loved them and cared for them. They knew their salvation was secure. They knew that faithful and faith-filled people need not suffer like “those who have no hope,” but the pain is no less real.

One of our crews worked in the home of Sharon and Dave Huffman for three-and-a-half days. After our first day of work, Sharon and Dave began to see progress. On the first day, as we began to put in the new drywall, Sharon, with tears in her eyes, exclaimed, “I have walls again.” Something we take for granted had become a source of hope and encouragement.

The next crew from Cincinnati worked two days in Marie Jackson’s house. It took that long just to remove the moldy interior walls, kitchen cabinets and garage walls. As we worked, Marie was trying to salvage photos, plates and other personal items. These were not just stuff. They were the precious memories of a lifetime.

As Christians, we know the physical is not all there is. But it hurts to stand by helplessly and watch everything familiar to us hauled off to the garbage dump. But one thing can never be hauled away—love. The only thing that has permanent value is the love we share for God and one another. 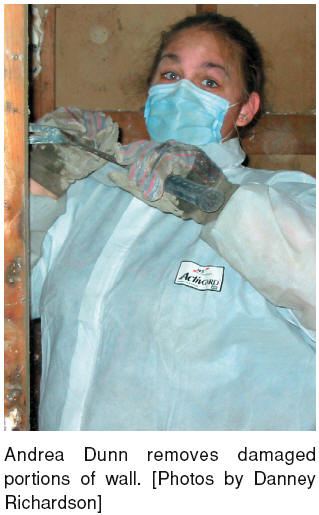 That’s what we need to remember “after the cameras leave.” What Sharon and Dave and Marie needed, months after the flood, was reassurance. Just some hope from people who cared.

As we left on Friday afternoon, we realized we would never be the same again. We had experienced a sense of loss in a way we had not before. The things we value so highly are now in a better perspective. We had a new appreciation for the value of kindness, compassion and mercy—for the power of love.

We realized that we could only make a little difference to the devastated region. But it made a big difference to us. We had given hope, and the experience had changed us forever.