The Advent-Christmas season is almost upon us, that joyful time of year when we celebrate the birth of our Lord Jesus Christ.

Have you ever wondered how Christmas came to be part of the annual Christian calendar? Here’s the fascinating story, which we begin with a surprising observation. Neither Jesus nor the apostles commanded or even suggested that the church should have a Christmas festival — and no evidence of such a celebration is in the New Testament.

The church also added Pentecost and Epiphany to its yearly worship calendar in the second century. Epiphany, on Jan. 6, celebrated not the birth of Christ, but the manifestation of his divine sonship, his kingship and his divine power as displayed in his baptism, the visit of the Magi, and his miracle at the wedding feast in Cana. Pentecost commemorated the coming of the Holy Spirit.

Epiphany was the church’s earliest annual celebration in connection with the Incarnation of Jesus. However, it was not until the fourth century that we have clear evidence of the birth of Jesus being celebrated on Dec. 25.

One theory for the origin of Christmas is that it was intended to compete with or supplant the pagan celebration of the sun-god on that date. According to this hypothesis, accepted by most scholars today, the birth of Jesus was given near the date of the winter solstice. On this day, as the sun began its return to the northern skies, the pagan devotees of Mithra celebrated the birthday of the invincible sun. The cult was particularly strong at Rome when Christmas celebration arose.

The idea is that the church tried to counteract this pagan worship with its own celebration of Jesus’ birth. That makes good sense, since the church was, in effect, providing its members with a Christian worship and fellowship opportunity while the pagans were cavorting and doing homage to their gods. It was also an opportunity for the church to preach the true gospel. If this reasoning is correct, what Christians did, then, was to redeem in Christ an understanding that he (not a pagan sun god) was the true Son and Sun of Righteousness (Malachi 4:2) — the true light that lights our path with his grace (John 8:12).

Another idea as to why Christmas celebration began and expanded throughout the church has to do with its need to combat a then rampant heresy about Christ’s Person. The council of Nicea in 325 had condemned Arianism, which claimed that Jesus Christ was only an exalted creature and not true God of true God.

It was not long afterward that the Christmas festival first appeared in Rome, and then spread to the churches in other parts of the Roman Empire. In this view, the controversies of the fourth century about the incarnation and person of Christ impelled the church to create a festival that would celebrate the mystery of God becoming man, as a kind of teaching tool for the church.

Why wasn’t Jesus’ birthday celebrated earlier than the fourth century? One reason might be that neither the day nor month of Jesus’ birth is given in the Gospels or any other early Christian writings—and cannot be determined with any certainty. Despite this, it seems to have been the opinion of some church leaders in the first four centuries that Christ was actually born on Dec. 25. 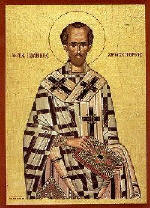 Theologian John Chrysostom (347-407) appealed, in support of this view, to the date of the registration under Quirinus (Cyrenius). He apparently believed that the census and tax records of Jesus’ family were preserved in the Roman archives. Justin Martyr (100-165), in his noted Apology, stated that Jesus was born at Bethlehem, saying such can be ascertained “from the registers of the taxing” (Apology I, 34).

Tertulian (160-250), spoke of “the census of Augustus — that most faithful witness of the Lord’s nativity, kept in the archives of Rome” (Against Marcion, Book 4, 7). The early church father, Hippolytus (180-236), came up with a Dec. 25 date, which he attempted to calculate from information in the Gospel of Luke regarding the ministry of the priest Zechariah, John the Baptist’s father (Luke 1:5, 8-10).

Whatever the facts might be about the date of Jesus’ birth, it is clear that the church sensed the need to have a festival that commemorated the birth of our Savior. In the words of the church historian Philip Schaff, it was inevitable that the church would have “sooner or later called into existence a festival which forms the groundwork of all other annual festivals in honor of Christ” (History of the Christian Church, volume 3, “Nicene and Post-Nicene Christianity,” page 395). Schaff points to Chrysostom’s observation that without the birth of Christ there would be no salvation history in Christ — no baptism, passion, resurrection, ascension or outpouring of the Holy Spirit. Hence, there would be no celebration of Epiphany, of Easter or of Pentecost.”

However meaningful Christian worship was during the Christmas season, we must also acknowledge that Christmas was often celebrated with the same sensual excesses as some pagan feasts had been among the general populace. Truly, at times in the history of the church, it was needful to put Christ back into Christmas.

Puritans in Britain and America

“Puritans” was the name given in the 16th century to a group of Protestants that arose from within the Church of England. As part of their broad-based reform agenda, they demanded that the church should be purified of any liturgy, ceremony or practices that were not found in the Bible.

Since the Christmas celebration was not mentioned in Scripture, the Puritans concluded that it must be stopped. When the group came to political power in England under Oliver Cromwell (1599-1658), they immediately proceeded to outlaw Christmas. Cromwell and the Puritans even banned special church services, not just on Christmas but also on Easter and Pentecost. Christmas Day was a regular work day and shops remained open. Parliament was to sit as it usually did. Criers were sometimes sent through the streets, shouting, “No Christmas today, no Christmas today.”

The year 1642 saw the first ordinance issued forbidding church services and civic festivities on Christmas day. These were issued regularly in the ensuing years. On June 8, 1645, the Puritan-dominated Parliament abolished the observance of Christmas, Easter, Whitsuntide and the Saints’ days. In 1660, things changed. The Monarchy was re-established, and the Puritan clergy were expelled from the Church of England. Many Puritans migrated to New England in America, beginning in the second decade of the 17th century.

In Puritan New England, Christmas was a regular workday, and any violation of this was punishable by fine or dismissal. In 1659, the Massachusetts Puritans declared the observation of Christmas to be a criminal offense. Offenders had to pay five shillings as a fine. In Massachusetts, Dec. 25 did not become a legal holiday until 1856. It is hard to realize now that worship on Christmas was outlawed in New England until the second half of the 19th century.

Twelve Days of Christmas and Advent

“The Twelve Days of Christmas” is more than a secular, traditional Christmas song. At one time it was common for Christmas worship and celebration to last 12 days, from Dec. 25 until Jan. 5, the beginning of Epiphany. This tradition has virtually disappeared.

Today, the season of Advent begins the yearly worship or liturgical calendar. Advent is celebrated on the four Sundays preceding Christmas. It is devoted to the commemoration of the coming of our Lord in the flesh as well as to his return at the final judgment. That’s why they are called Advent Sundays, since advent means the coming or arrival, especially of something extremely important. (What event could be more important than the coming of the Son of God in human flesh — and then his coming again as King of kings and Lord of lords!)

Lawrence Stookey, in his book Calendar: Christ’s Time for the Church, explains it this way: “The primary focus of Advent is on what is popularly called ‘the second coming.’ Thus advent concerns the future of the Risen One, who will judge wickedness and prevail over every evil. Advent is the celebration of the promise that Christ will bring an end to all that is contrary to the ways of God; the resurrection of Jesus is the first sign of this destruction of the powers of death…. The beginning of the liturgical year takes our thinking to the very end of things” (pages 121-122).

For the church, the entire Christian year centers on the person and work of Jesus Christ. Christians do not “celebrate” or “keep” days as though holy in themselves, but rather worship Christ and recall the great events of our salvation, using those special times as opportunities for worship.

The purpose of the annual worship year is to keep our minds focused on the story of salvation and to worship Jesus Christ in a way that ministers to his glory. Specifically, Christmas, Advent and Epiphany were meant as vehicles to celebrate Jesus Christ.

The yearly Christian festivals remind us of the leading events of the gospel history, and beckon us to participate in worship of Christ. In the words of Philip Schaff: “The church year is, so to speak, a chronological confession of faith; a moving panorama of the great events of salvation; a dramatic exhibition of the gospel for the Christian people” (History of the Christian Church, volume III, pages 387).

May you have a blessed and joyous Christmas!