Before you begin your Bible study, take some time to choose your translation. 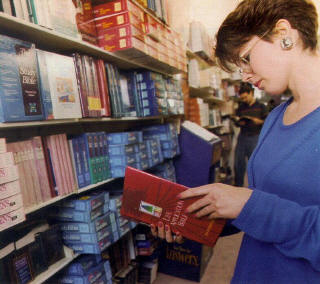 A friend from Japan was telling me about the Japanese version of the Bible he uses. He turned to Luke 5:39. In the New International Version this scripture reads, “And no one after drinking old wine wants the new, for he says, ‘The old is better.’” My friend told me: “My Japanese Bible does not say ‘wine.’ It says ‘sake’ [a Japanese beverage made from fermented rice]. Since new sake is better than old sake, the verse goes, ‘No one after drinking new sake wants old, for he says, ‘The new is better.’”

At first glance, that translation seems the opposite of what Jesus said. He said the old was better, not the new. Also, Jesus said wine, not sake. Wine is usually better after a few years of aging. Sake is better when it is fresh.

In this verse, Jesus was contrasting the old legalistic form of religion with the new form he brought. In English versions the old and new wine is a metaphor for these two forms of religion. In the Japanese translation, the sake metaphor conveys Jesus’ intent of there being a difference between the two. Ironically, if the translators had chosen the literal rendering, Jesus’ intended meaning would have been lost for the Japanese readers.

This story illustrates a dilemma that continually haunts Bible translators. Should they translate as literally as possible, and risk confusing the reader, or should they translate the intent of the Scriptures, and thereby lose some of the original meaning?

As Christians, we value the Word of God, and our natural instinct may tell us to trust only a literal translation of the Bible. “When people say they want a literal, word-for-word translation,” says Ken Barker, “they are thinking that more literal equals more accurate.” Barker is executive director of the New International Version (NIV) Translation Center in Lewisville, Texas.

“Being literal is not the same thing as being accurate,” says Barker. “A completely literal translation would be awkward, confusing and sometimes misleading.” For example, a literal English translation of Jeremiah 12:2 would read something like, “You are near in their mouth, but far from their kidneys.” In Hebrew, the kidneys represent a person’s seat of emotions — the heart, as we would say in the English language. The King James Version, translating literally, used reins, a virtually forgotten term for kidneys.

The New International Version (NIV) translates this verse, “You are always on their lips but far from their hearts.” This translation, though not literal, captures the intent of the original. The New King James Version (NKJV), completed in 1982, updates the original 1611 version and smooths some of the awkward, word-for-word renderings. Still, the NKJV can be difficult to read. For example, in Job 36:33 the NKJV says, “His thunder declares it, the cattle also, concerning the rising storm.” Though this improves on the 1611 translation, you will probably have to read the passage several times to catch the meaning. The NIV translates this verse, “His thunder announces the coming storm; even the cattle make known its approach.” 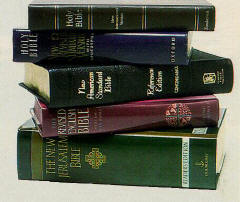 An example from Paul’s writings further shows the differences between these two translations. The NKJV translates Romans 8:8, “So then, those who are in the flesh cannot please God.” This translation is literally accurate, but not as immediately understandable as the NIV’s: “Those controlled by the sinful nature cannot please God.” The NIV is closer to what Paul meant. He was using the word flesh as a metaphor for the sinful nature.

Translators of the NIV steer the middle course between the literal, word-for-word and the freer, thought-for-thought translations. When recommending a Bible version for the average person’s main study Bible, Professors Gordon Fee and Douglas Stuart wrote, “We would venture to suggest that the NIV is as good a translation as you will get” (How to Read the Bible for All Its Worth, 2nd ed., page 43).

Still, when you use any Bible version, you are reading God’s Word in translation and losing some original meaning. Though translators deeply respect the Word of God and strive to be accurate, they admit that no translation or translator is perfect.

Preferences of the translators, including their theological biases, inevitably appear. Thus, just as they have been careful in translating their version, they urge Bible students to be careful in using it. For this reason, you will learn more in your Bible study if you regularly consult other versions. A good technique is to refer to at least two other Bible versions — one of them more literal and the other more thought-for-thought.

On the other hand, freer, thought-for-thought versions often have a natural, easy-to-read flow. They enable you to easily read a book of the Bible in a few sittings to get an overview of what is discussed.

Freer translations can also be quite thought-provoking. They convey an emotion that may be lost in more rigid translations. Good thought-for-thought translations are the Revised English Bible, the Jerusalem Bible, and the New Living Translation. Paraphrases such as Eugene Peterson’s The Message Bible can also be helpful.

With a middle-of-the-road translation, like the New International Version, as your regular study Bible, you can confidently explore other translations to enrich your understanding of the Scriptures. Comparative Bible study using several different translations allows God’s Word to speak to you clearly — even in translation.

Donate
Will You Respond Like a Berean?
It was the Sabbath in Berea, although for most of the inhabitants, it was just another day — an ordinary day in a rather ordinary...
Read More
Scroll to top