Let’s go through the Bible together from start to finish. There is a lot of territory to cover, but we’ll move quickly, since the goal is to give you an overview of the book. We’ll pause from time to time during this tour to explain some things you might not otherwise understand. (If our tour is a bit too basic for you at times, please bear with us. Some people on this tour may be opening the Bible for the first time in their lives.) 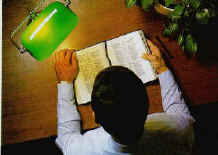 We can’t explain everything, of course. The Bible is a big book, and its pages invite a lifetime of study. But this quick, introductory tour will help you see how the Bible fits together and how its basic themes are developed. When we’re finished, these hundreds of pages won’t seem quite so mysterious. We hope this tour will whet your appetite to come back and explore more thoroughly.

It is important that you follow this tour with a Bible at hand. Make sure that the Bible you will be using is complete. Any Bible that contains both the Old and the New Testaments will be suitable for this quick tour of the Scriptures.

So if you’re ready, let’s start by looking at the cover. In addition to the words Holy Bible, you’ll probably see a designation of which version you have. If your Bible is older, it most likely is what is known as the Authorized or King James version, because it was prepared and published under the patronage of King James VI of England in 1611. Or if you are in the Roman Catholic tradition, it may be a Douay-Rheims Version.

Or your Bible may be an updated version, such as the New International Version, the New Revised Standard, the New American Standard, the New King James, the New English Bible, the Revised English Bible, and the New Living Translation, or you may have yet another of the many versions available. In this series of articles, we are using the New International Version as our reference. If you are using another version, you may find the wording slightly different, but the other essential features will be the same.

Now look at the title page. Under the title you’ll see words such as Containing the Old and New Testaments, showing that the Bible is divided into two main parts. (Some Bibles include other sections, too, but we will stick to the most common two-part arrangement.) The Old Testament tells of events from the creation of humans to a time about 400 years before Jesus Christ was born. An important theme is the rags-to-riches-to-ruin-to-rebuilding story of ancient Israel. These people lived in the Middle East.

The New Testament, much shorter than the Old, contains the four Gospels, each recounting the life and teachings of Jesus Christ. The Gospels are followed by the Acts of the Apostles, which tells the story of the first years of the Christian church. The New Testament also includes many of the letters (known as “epistles”) written by the apostles. It concludes with the Apocalypse or Book of Revelation.

You also may notice, on the title page, a paragraph that reads something like this: Translated out of the original tongues and with former translations diligently compared and revised. Hebrew and Aramaic were the original languages of the Old Testament. The New Testament was originally written in Greek. What you are looking at is a translation.

After the title page, you may find a list explaining abbreviations and perhaps a pronunciation guide for some of the unfamiliar names and places. There may also be a few pages of introduction or a preface from the publishers. Most King James Bibles reproduce the letter of dedication by the translators in honor of their royal sponsor. These prefaces and forewords are interesting, but they are not part of the actual text of the Bible and need not detain us now.

Next, you should find a table of contents listing the various books of the Bible in order. The word Bible derives from a Greek word, biblon, which means “book.” The Bible is actually a collection of many different writings, written over a period of about 1,400 years by 40 or more authors. And yet the books support each other in a coherent way, which is one reason people who believe and trust the Bible recognize it as God’s Word.

This book has been likened to an instruction manual from humanity’s manufacturer. It boldly claims that God created human life for a purpose. It tells us that God’s plan for us extends far beyond our years of physical existence.

One of the best-known verses in the Bible is the so-called “golden verse,” from the third chapter of the Gospel of John: “For God so loved the world that he gave his one and only Son, that whoever believes in him shall not perish but have eternal life” (John 3:16). You’ve probably heard that before. But do you understand it? Why is humanity perishing? How does believing in Jesus Christ give us eternal life? What is it, anyway?

In another New Testament verse, the apostle Paul reminds a young man, “From infancy you have known the holy Scriptures, which are able to make you wise for salvation through faith in Christ Jesus”(2 Timothy 3:15). In other words, the Scriptures contain all we need to know to be saved. But saved from what? Saved for what? Our tour of the Bible will look at these questions.