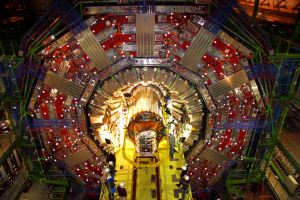 God, the blessed and only Ruler, the King of kings and Lord of lords, who alone is immortal and who lives in unapproachable light, whom no one has seen or can see. 1 Timothy 6:15-16

Recently I visited the CERN Super Collider in Geneva, Switzerland, as the guest of Dr. Keith Baker—a particle physicist who is also a committed Christian. Keith is a Yale Professor who has also been involved with the cutting-edge experiments now being conducted using this amazing technological marvel carved into the rock beneath France and Switzerland.

We watched the operators in the control room, which reminded me of Mission Control for a space mission. Which, of course it is. Except that these men and women are supervising a journey into inner space. The actual experiment is going on deep in the ground under our feet in a circular tunnel 17 miles in circumference. Down there, protons (one of the smallest particles of matter) are accelerated to nearly the speed of light, and then redirected to smash into each other.

I have a vague understanding of what happens when these particles collide, but I think it would be better to leave the explanation to someone who really knows what he is talking about. So we have included an interview with Keith Baker in this issue (see page 5). By the way, don’t feel bad if you don’t fully understand it. It seems that no one does. I take comfort from the words of the Nobel Prize-winning pioneer of quantum mechanics, Niels Bohr, who admitted, “If you are not completely confused by quantum mechanics, you do not understand it.”

Nevertheless, what we are on the verge of learning from the collider is likely to turn our understanding of the universe on its head. As physicist Lisa Randall wrote,

We are poised on the edge of discovery. The biggest and most exciting experiments in particle physics and cosmology are under way and many of the world’s most talented physicists and astronomers are focused on their implications. What scientists find within the next decade could provide clues that will ultimately change our view of the fundamental makeup of matter or even of space itself—and just might provide a more comprehensive picture of the nature of reality. (Lisa Randall, Knocking on Heaven’s Door: How Physics and Scientific Thinking Illuminate the Universe and the Modern World)

There’s no threat to God in scientific discovery; he’s the one who made whatever is discovered. So why should believers feel threatened?

At CERN that excitement is contagious. It can be an exciting time for the rest of us too, as we look over their shoulders. Because surely the more we understand about the creation, the more we will appreciate its Creator.

Could it be that discoveries that revolutionize our ideas about creation could also revolutionize our understanding of its Creator? Sadly, many people will see a threat in the very idea. We like to think we have God figured out, and when science comes up with something that challenges established ideas, the first reaction is to resist. Copernicus, Galileo, Newton and Einstein proposed ideas that blew the conservative doors off their hinges and opened up startling new levels of understanding. That might be about to happen again.

Like theologians, scientists like to think they have got things figured out. But as they probe ever deeper into outer and inner space, they discover new levels of intricacy. There is still so much we do not know about our cosmos, even the small part that is available to experiments. Most of it is not. What scientists have labeled dark energy and dark matter make up 94 percent of the universe. They are beyond the reach of our senses and our instruments, but they have a massive impact on the small sliver of the cosmos we can investigate. What we do experience seems to be just a part of a greater reality. Are we just one of millions of other universes? Are there extra dimensions beyond those we experience? Is time linear, or do the past, present and future all “happen” at the same time? Could there be life—even intelligent life—elsewhere in the universe? Einstein based his theories on the apparent fact that the ultimate possible speed is the speed of light, but recent experiments suggest this might not be so.

Any human being will have difficulty creating an accurate visual image of what’s going on at the minuscule scales that particle physicists study today. The elementary components that combine to form the stuff we recognize as matter are very different from what we access immediately through our senses. Those components operate according to unfamiliar physical laws. As scales decrease, matter seems to be governed by properties so different that they appear to be part of entirely different universes.

New discoveries are always hard to explain, and just to talk about them takes us, as theologian/physicist John Polkinghorne observed, “to the frontiers of language.” In other words, we don’t have the words to express what we think we might be trying to say. The easy way out is to dismiss new understanding as nonsense, and that, sadly, is the road that religion has often chosen. When scientific advances are seen as threats, the natural reaction is to attack and ridicule them. It need not be so. New discoveries simply give us deeper insight into the reality of the creation as God actually made it, not as we have assumed that it should be. There is no threat to God in scientific discovery; he’s the one who made whatever is discovered. So why should believers feel threatened?

When scientific language becomes inadequate to describe new frontiers in understanding, scientists sometimes find themselves resorting to language that sounds vaguely theological. Lisa Randall based the title of her book, Knocking on Heaven’s Door, on the idea that as we now have instruments that can accelerate particles to approach the speed of light, we are metaphorically “knocking on heaven’s door.”

In metaphorical language of its own, the New Testament tells us, “God dwells in unapproachable light.” Whatever we discover about the intricacies and mysteries of the universe, we will never “discover” God in it. However long and hard we knock on heaven’s door.

That’s why God came knocking at our door, meeting us on our territory. God, in the person of Jesus, became one of us. For about thirty years he lived among us, showing us things and telling us things we could never discover for ourselves. He showed us that behind the curtain of “unapproachable light” there is indeed an awesome power, one that is not forever beyond reach. He showed us a Creator who knows us, loves us and, in Jesus, shares all that he is with us.

The people who believed this before the scientific age found it exciting. We, who have the blessing of knowing so much more about the creation, should find it even more so.

This is indeed an exciting time to be a scientist—and a Christian.