From my first memories, I have known I was adopted. Momma and Daddy had told me since I can remember that I was specially picked from all the other babies when I was three months old in 1965. I didn’t understand genetics, DNA and human reproduction, so the ramifications of the word “adopted” didn’t mean anything to me. I simply knew Momma and Daddy loved me.

By the time I was older and understood a bit about reproduction, the context of not being a part of the family because I wasn’t born into it still didn’t mean anything. Kids in school sometimes told me, “You’re just someone’s trash and were thrown away.” That never gained any traction with me emotionally because I knew to my core that I had been specially chosen, I was loved and I was wanted. 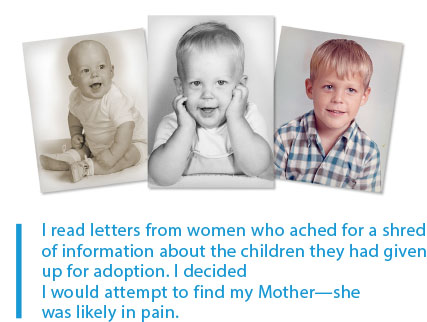 When I hit puberty and began to better understand human reproduction, I began to wonder what my biological mother and father were like, what they did, were they still alive and where they were. There were many questions but no answers, as my adoption was sealed by court order. Was my biological mother a prostitute, was she rich, was she a pregnant teenager who couldn’t handle a child? On and on my mind wandered. I became more and more curious.

The questions followed me into adulthood, and with the advent of the internet I began to look up adoption-related topics online. I never really believed I would find the answers, and I almost convinced myself it didn’t really matter, but I kept looking. During one internet search, a particular site grabbed my attention as it shared stories of women who had given up their children for adoption and how painful it was for them. Many women had written letters to their unknown children. Many ached for a shred of information about the children they had lost. I decided then and there I would make the best attempt I could to find my biological mother. She was likely in pain.

I went to the adoption agency and paid a fee to have non-identifying information given to me. The social worker on duty wanted me to read through the papers in her presence. I’m not sure why except perhaps to help me process what I read. It turns out Mother was a college graduate with a successful military career and was in her early 20s. She came from a prominent political family. I was stunned as I read. The “non-identifying” information included was rather robust and had the age of Mother’s parents, her siblings and their children, her grandparents’ death dates, and even great-grandparents’ dates. I was from a big family.

I asked about next steps, and the social worker explained that unless the biological mother and I mutually consented to unseal the documents, the documents would remain sealed. We would need to first do a search to see if they could find her, then they would contact her discreetly to determine if there was interest in moving forward. I paid the fee for the private investigator to track Mother down and left with the cache of “non-identifying documents.” 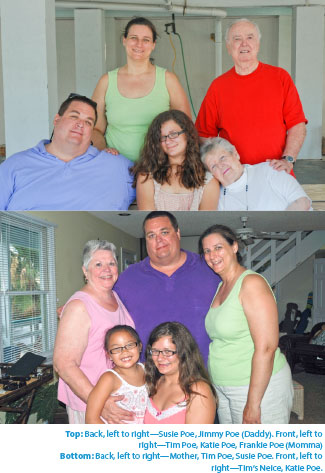 When I arrived home and began showing the documents to my wife, I realized the documents had been improperly redacted and that the underlying type could be read under the black marker. I knew my birth surname! Over the next several months of meticulous scrutiny of the documents, I realized that one document had Mother’s full name unredacted. Meanwhile, I waited patiently for the adoption agency to respond to the progress of their search. The answer finally came that Mother could not be located. Women frequently take new names, and if you don’t have a social security number, it can be nearly impossible to find them. I chalked it up to God’s will that I would not find Mother and went on with life.

In 2000, I was watching the History Channel, and they were running commercials from a genealogy research database. It struck me during one of those commercials that I had a good bit of genealogical information, about Mother. I went to their online site and put in Mother’s name. 10 hits. The first one I picked showed a woman of the right age, her husband’s name and other information. The number of siblings, dates and sexes were right. I could hardly believe it.

As I went up and down the genealogy information I was floored that everything matched prior to 1965. I asked my wife, Susie, to look at the information and she said, “Tim, this has got to be her.” I called Momma and Daddy, who lived just down the street, and while explaining the find to Daddy, Susie said, “Hey Tim, they’re in the phone book.”

Susie and I went to my parents’ house and showed them what we had. “Timmy, this has got to be her,” Daddy said. “What are you going to do?” Susie asked. “Well, it’s too late to call tonight, so I guess I’ll call her tomorrow.”

I called the next morning. I wanted to come off as non-threatening as possible when I introduced myself, so I thought I’d state a church affiliation.

“Mrs. Halvorsen, I’m Tim Poe, a deacon with the local Worldwide Church of God, and I would like to ask you some questions.”

Dead air for about 20 seconds.

“Mrs. Halvorsen, I am that child.”

“I don’t know what you have told your family or not told them, and I don’t want to hurt you or your family in any way. But I have an 18-month-old daughter. Every time I take her to the doctor and they ask me about my family’s medical history, I have to say I don’t know because I’m adopted.”

“I don’t know if I can open that can of worms right now,” a breaking voice said.

“I don’t know what level of contact you’re willing to have, but let me just give you my name and phone number. Please think about it for a couple of weeks and call me back. Then, if you say you never want to hear from me again, I am fine with that. I would like to get some medical information, but even if you are not willing to part with it, I understand. I don’t want to hurt you or your family in any way.”

She took down my number and said a terse goodbye. I turned to Susie and told her I was at peace. Even if she never called back, at least I had found her. I was pretty sure that chapter of my life was closed. It was really a new beginning.

The phone rang at 9 a.m. the next morning. It was Mother. The resulting phone call was a conversation filled with questions of, “How did you find me?” “Where do you live?” “When can we schedule a meeting?” Then she said, “I don’t have detailed medical information about your father.”

We met a month later. Mother came to our home, and the awkwardness quickly wore off as we pelted each other with questions. It turns out we had never lived more than a mile apart during my childhood. She was active in the local Catholic church, and so was my adoptive family, but the parish dividing line ran between our homes, so we were in different parishes. She had become close to a number of the Benedictine priests and monks at the high school I attended. She told me I was taken away from her so that she didn’t even know what sex I was. She told me that she had prayed for me every day of my life, and that since she didn’t know the sex she prayed for Tommy. I went by Timmy as a child. At one point, while telling the story of the pain she had gone through, she said, “I wish it had never happened.” I quipped, “Well, my family and I have a different perspective on that.” We all laughed.

Mother told of her two other children and how her daughter had graduated from Armstrong State College in Savannah with a degree in mathematics.

“I was there in the math program at that time, but I can’t put a face to her name.”

As Mother looked, she realized she hadn’t brought a picture of her children. Then a more serious subject came up. “You need to get some cancer screenings. Cancer runs in our family,” Mother warned.

Goodbyes were said. A tentative promise of a dinner meeting was made.

I was floored by the possibility of being acquainted with my sister and not knowing she was my sister.

A few weeks later Susie and I were waiting in the foyer of a Japanese steakhouse with Mother and Stepfather. Mother mentioned that my name rang a bell with her daughter, but she couldn’t put a face with it. My brother and his fiancée walked in, and we met them for the first time. The door opened again, and in a glance my sister and I simultaneously burst out laughing, immediately recognizing each other. My sister was the cute preppy blonde with whom I had shared several math and engineering classes. We had studied together at school and not infrequently shared down time between classes in the cafeteria as campus friends. “We could end up on Jerry Springer,” my sister laughed.

Momma and Daddy became friends with Mother and Stepfather. Stepfather died a few years ago, but not before we all became close. After about our third dinner together, Stepfather took me aside and said, “Thank you for finding her. You’ll never know what a difference you have made.” My mind immediately went back to the stories from the adoption websites. There is peace where there had not been peace. In the words of my daughter Katie, when she was 8, “You’re lucky, you have two mommas and daddies.” I am indeed a lucky man.