Herbert Armstrong emphasized that Christianity is a way of life.

In 1926, Herbert Armstrong was a newspaper advertising agent in Eugene, Oregon. He had no idea that within three decades his voice would be heard around the world. He certainly didn’t envision a career as a minister. But by the spring of 1931, with his wife Loma at his side, he began to make ministry his full-time work. Challenged by a neighbor, Herbert and Loma Armstrong launched an in-depth study of the Bible in 1926. Their studies led to fellowship with a group of Christians in Oregon.

Mr. Armstrong was baptized in 1927. Some nine years had passed since the end of World War I. In the aftermath of that “war to end war,” the map of Europe and much of the world was redrawn. For Europe, an era had ended. A kind of innocence was replaced with widespread bitterness, disillusionment and poverty.

After helping England and France win the war, the United States turned its attention inward. The brief postwar recession of 1920-21 was followed by an increase in prosperity. Flourishing industries turned out new technological marvels — automobiles, electric appliances, radios, motion pictures. Famous names and words of the period included Prohibition, jazz, Al Capone, Charles Lindbergh, Babe Ruth, the Charleston, Teapot Dome and Ernest Hemingway. Also remembered are flappers, vamps, bootleg liquor and an intense pursuit of ease and self-indulgence. These were the Roaring Twenties.

Not everyone was given to frivolity, however. The national character was, in fact, divided. Profound cynicism and the frenetic search for self-expression coexisted with conservatism of varying degrees. Much of Christianity had become secularized. Rationalism had produced a liberal theology that minimized the historical beliefs of Christianity. The ease and self-indulgence sought by the masses was matched by the “easy-believism” offered by many churches. The Roaring Twenties abruptly gave way to the Great Depression in 1929, and that became the context for Mr. Armstrong’s ministry.

Herbert Armstrong was born in Des Moines, Iowa, in 1892, into a Quaker family. He had an ordinary childhood, attending school, working during summer vacations and developing the skills he would eventually use in his ministry. At age 18, after reading a book titled Choosing a Vocation, and acting on the advice of an uncle, he decided to enter the field of journalism and advertising. He worked hard to educate himself, obtaining on-the-job training with newspapers and magazines. To advance his career, he moved to Chicago in 1915.

In 1917, while on a visit to his home in Iowa, he met Loma Dillon, a schoolteacher from nearby Motor, Iowa. They fell in love and were soon married. After a series of career successes and setbacks in Chicago, they moved to Oregon in 1924. Mr. and Mrs. Armstrong enjoyed nearly 50 years of married life, sharing the work of the ministry for most of those years. Loma died in April 1967.

The Armstrongs had two daughters, Dorothy and Beverly, and two sons, Richard and Garner Ted. The girls married and reared their families in Southern California after the family moved there in the late 1940s. Richard was killed in an automobile accident in 1958, only a few weeks after his wife had given birth to their first son. The younger son, Garner Ted, helped his father in the ministry of the church until 1978, after which he founded his own evangelistic association.

Entry into the ministry

When Mr. Armstrong began his study of the Bible, he had no intention of becoming a minister. He planned to continue his career in advertising. However, because he had studied the Bible, and because of his clear and forceful manner of speaking, members of the little congregation he and his wife attended began to ask him Bible questions. Then they began asking him to preach during services.

He found himself being drawn more and more into the work of the ministry. He conducted evangelistic meetings in small Oregon towns. People came. Lives changed. Church congregations grew in numbers. Interpreting his work as a call to ministry, the Oregon Conference of the Church of God (Seventh Day) ordained him in the spring of 1931. That was the beginning of more than half a century in the ministry.

Mr. Armstrong emphasized that a Christian is one who makes a life-changing commitment to Jesus Christ. He focused on Christianity as a total way of life as undivided allegiance to Christ. “Don’t believe me — believe the Bible,” he admonished time and again throughout his long ministry.

How the “work” began 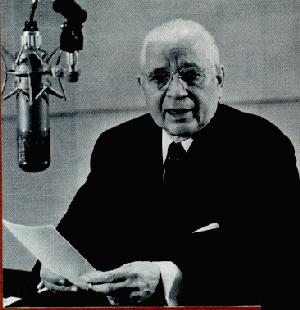 The work of the our denomination began in the early 1930s. Radio station KORE in Eugene, Oregon, offered free time to Mr. Armstrong for a morning devotional, a 15-minute time slot shared by other local ministers. Because Mr. Armstrong’s programs drew many positive comments, the station manager offered Mr. Armstrong a weekly half-hour time slot for $2.50 per week.

On the first Sunday in 1934, the World Tomorrow radio program was born. In February, he began to publish a mimeographed “magazine.” These were the modest beginnings of a worldwide ministry. Additional radio stations, first in Portland, then in Seattle, began to air The World Tomorrow. The number of names on the mailing list multiplied. The ministry expanded to California, then across the United States.

A message of peace

In 1952, The World Tomorrow began to air on Radio Luxembourg, making it possible to hear the program throughout much of Europe. Soon the magazine was being read in England and by many Europeans who could understand English. In the early 1960s, German, French and Spanish editions of the magazine were created. An office was opened in Australia, followed by offices in the Philippines, New Zealand, the Netherlands, South Africa and Mexico.

A lifetime of accomplishment

From the humble beginnings in Oregon to an international work, Mr. Armstrong kept reminding people that it was not his efforts, but the power and Spirit of God, that built the church. Mr. Armstrong always thought of himself merely as an instrument in God’s hands. He constantly encouraged church members to grow in the grace and knowledge of Christ — to always be willing to change when God showed the way. The church of God, he often observed, must be willing to admit error and to have the courage to change.

Herbert Armstrong died in January 1986 at the age of 93. After his death, the church continued to study Scripture — and found that many of his ideas were wrong (click here for more on that history). He had persuaded people by his enthusiasm, not by the Bible.

We have hundreds of local church congregations around the world. From the international headquarters of the church, a staff continues to oversee the work begun in 1934. That mission is to live and share the good news – the gospel of Jesus Christ – with others.