Acts 15 describes the most important meeting the early church had. The future of the church was at stake — was it to be a Jewish group, or would it allow Gentiles? The council of Jerusalem forms the decisive step that makes the Gentile mission dominant. 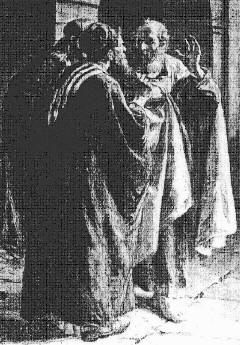 If Gentiles could enter the church without following Jewish laws, the church would attract more Gentiles, and eventually Gentiles would be the majority. The church would no longer be a branch of Judaism, but a distinct faith. Let’s see how the council of Jerusalem developed.

The council comes in the center of the book of Acts. Acts begins with the Jewish church, dominated by Peter in chapters 1 to 5. The book ends with Paul’s mission to the Gentiles, in chapters 16 to 28. Chapters 6 to 15 form a transition, alternating between Jewish and Gentile growth.

Chapter 15, the council of Jerusalem, forms the climax of the transition between Jewish and Gentile evangelism. In the story flow, the council forms the decisive step that makes the Gentile mission dominant. Paul and Barnabas had returned from a successful missionary trip in Gentile areas. They told the church in Antioch how God had “opened the door of faith to the Gentiles” (14:27). Thus the stage is set for chapter 15. Let’s go through it verse by verse.

“Some men came down from Judea to Antioch and were teaching the brothers: ‘Unless you are circumcised, according to the custom taught by Moses, you cannot be saved’” (15:1). They were saying that circumcision was required for salvation.

They probably thought the question was simple: Christians should obey God, and God had commanded circumcision. If people want the blessings of Abraham, they should act like children of Abraham, and that meant circumcision for Gentiles as well as for Jews (Genesis 17:12).

Paul and Barnabas had a different opinion: “This brought Paul and Barnabas into sharp dispute and debate with them” (Acts 15:2). How was the argument to be resolved? “Paul and Barnabas were appointed, along with some other believers, to go up to Jerusalem to see the apostles and elders about this question.” In this way the church could have unity.

So “the church sent them on their way, and as they traveled through Phoenicia and Samaria, they told how the Gentiles had been converted. This news made all the brothers very glad” (verse 3). Luke is letting us know that most Christians supported the Gentile mission.

“When they came to Jerusalem, they were welcomed by the church and the apostles and elders, to whom they reported everything God had done through them” (verse 4). What God had done was part of the evidence. The miracles and conversions supported what Paul was saying.

Then they debated the question: “Some of the believers who belonged to the party of the Pharisees stood up and said, ‘The Gentiles must be circumcised and required to obey the Law of Moses’” (verse 5).

What were these laws? Were they biblical laws, or the unbiblical traditions of the elders? In every other New Testament mention of the “laws of Moses,” the biblical books of Moses are meant (see below). Luke could have said “traditions,” but he did not. Anyone who knew the teachings of Jesus would already know that unbiblical Jewish traditions were not required. They did not need to debate about traditions. Just as circumcision was a biblical law, so also the laws of Moses were biblical laws.

The claim was this: Gentile believers should be circumcised, and then, as part of the people of God, they should obey all the laws he had given. One of the laws of Moses was that males were to be circumcised. However, the council concluded that Gentiles did not have to keep all those laws. Let’s see how they reached that decision.

“The apostles and elders met to consider this question” (verse 6). Perhaps dozens of elders were involved. “After much discussion, Peter got up and addressed them: ‘Brothers, you know that some time ago God made a choice among you that the Gentiles might hear from my lips the message of the gospel and believe’” (verse 7).

Peter reminded the people that God had used him to preach the gospel to Cornelius and his family (Acts 10). Cornelius was not circumcised, but Peter did not use that as proof. Rather, he focused on the theological foundations of how a person is saved — by believing.

“God, who knows the heart, showed that he accepted them by giving the Holy Spirit to them, just as he did to us. He made no distinction between us and them, for he purified their hearts by faith” (verses 8-9). God gave the Holy Spirit to this uncircumcised family, purifying their hearts, pronouncing them holy, as acceptable to him, because of their faith. Peter then began to scold the people who wanted the Gentiles to obey the laws of Moses: “Now then, why do you try to test God by putting on the necks of the disciples a yoke that neither we nor our fathers have been able to bear? No! We believe it is through the grace of our Lord Jesus that we are saved, just as they are” (verses 10-11).

Peter’s point is that the yoke of Moses was a burden that the Jewish people were not able to keep successfully. Those rituals showed that, no matter how hard people worked, they could never be perfect. The rituals showed, for anyone who ever wondered, that works can never lead to salvation. Salvation is attained in a different way — by grace. We can’t earn it, so it has to be given to us.

Since the Law of Moses cannot bring us salvation, there is no need to require the Gentiles to keep it. God gave them the Holy Spirit and showed that he accepts them without all those rituals. They are saved by grace — and the Jews are, too.

If we follow Peter’s logic, we will see that Jewish believers do not have to keep the laws of Moses, either. They are saved by grace through faith, just as the Gentiles are. The old covenant is obsolete, so its laws are no longer required for anyone, and that is why Peter could live like a Gentile (Galatians 2:14). But that is getting ahead of the story. In Acts 15, the question is only whether Gentiles have to keep the laws of Moses.

The judgment of James

After Barnabas and Paul told “about the miraculous signs and wonders God had done among the Gentiles” (Acts 15:12), James spoke. As leader of the Jerusalem church, he had a lot of influence. Some of the Judaizers even claimed him as their authority (Galatians 2:12), but Luke tells us that James was in complete agreement with Peter and Paul.

“Brothers, listen to me. Simon [Peter] has described to us how God at first showed his concern by taking from the Gentiles a people for himself” (Acts 15:13-14). The fact that God has already acted was powerful evidence. James then quoted from the Greek translation of Amos to show that Scripture agreed with what was happening (verses 15-18). He could have used other Old Testament prophecies, too, about Gentiles being included among God’s people.

James then suggested four rules: “Instead we should write to them, telling them to abstain from food polluted by idols, from sexual immorality, from the meat of strangled animals and from blood” (verse 20). Instead of making things difficult for the Gentiles, these four rules would be enough. They were part of idolatrous practices that Gentile Christians should avoid.

Obviously, Gentile believers should not lie, steal and murder. They already knew that, and did not need a special reminder about it.

The decree makes it clear that Gentiles do not have to be circumcised, nor do they have to obey the laws of Moses. They are circumcised spiritually, not physically. God never gave those commands to the Gentiles.

We should not make it difficult for the Gentiles, James said. Instead, it will be enough to give them four rules, which they will find easy to comply with. Why give them these rules? Notice the reason that James gives: “For Moses has been preached in every city from the earliest times and is read in the synagogues on every Sabbath” (verse 21).

James was not encouraging Gentile Christians to attend the synagogues. The synagogues taught circumcision and Moses, the exact things that the Judaizers wanted forced upon the Gentile Christians. But because those laws were commonly preached, the apostles should tell the Gentiles four rules. Then they would not think that Christianity is more difficult than it is.

The thought is this: Because God is doing this work (verses 14-17), and because we do not want to hinder his work (verse 19), we should therefore give Gentile converts this decree (verse 20) because much stricter rules are being preached in the synagogues (verse 21). Pharisaic rules are too strict for Gentile Christians, but because those rules are being taught in every city, we need to write a decree to let all Gentiles believers know that they don’t have to keep the laws of Moses.

To summarize: Some men said that Gentiles should be circumcised and obey the laws of Moses or else they could not be saved. Not so, said the apostles. Gentiles are saved by grace and faith. God is pleased to dwell in people who aren’t circumcised and who don’t keep the rituals. But since Moses is widely preached, we need to give a decree that clearly distinguishes the Christian faith from the Law of Moses.

Donate
The New Covenant Makes Some...
Early Christians may have been surprised that any biblical command (including the sacrifices and rituals) could become...
Read More
Acts Chapter 15
The Council at Jerusalem (Acts 15) “Certain people came down” (15:1) While Paul and Barnabas are teaching at...
Read More
Decree of the Council of...
Acts 15 is the center of the book of Acts. In the story-flow of Acts, the Jerusalem council resolves crucial issues and enables the...
Read More
Scroll to top